This page can be viewed at http://www.historycommons.org/entity.jsp?entity=abdul_kahar_1

Abdul Kahar was a participant or observer in the following events: 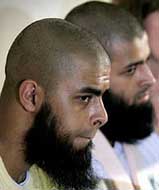 Abdul Koyar and Abdul Kahar. [Source: Reuters]Acting on intelligence indicating the construction of a chemical device, police carry out an armed raid which leads to a shooting and two arrests in Forest Gate, east London. The shot suspect, Abdul Kahar, is taken to hospital while his brother, Abdul Koyar, is held at a local police station. Sources reveal that intelligence indicated the presence of a “viable” chemical weapon in the house that was capable of producing hundreds of casualties. Deputy Assistance Commissioner Peter Clarke, head of the Metropolitan Police anti-terror unit, describes the intelligence as “specific.” An air exclusion zone is established at an altitude of 2,500 feet above the site and police in bio-chemical suits and gas masks conduct the search. This search of the home fails to turn up any threat, as do searches of where the men work. (BBC 6/3/2006) The raid, which cost more than $4 million, fails to find the suspected chemical bomb. Scotland Yard justifies the raid as necessary to determine the validity of the intelligence. The raid causes heavy tension between law enforcement and the Bangladeshi Muslim community of Forest Gate. Overtime pay for the more than 200 officers used in the raid amounts to $1.7 million and $.7 million is spent on “non-pay costs” such as catering and the erection of road barriers. The men are subsequently released without charge. (Steele 10/3/2006)