This page can be viewed at http://www.historycommons.org/entity.jsp?entity=abdul_rahim_al_sharqawi_1

Abdul Rahim al-Sharqawi was a participant or observer in the following events:

Abdul Rahim al-Sharqawi. [Source: US Defense Department]In newspaper adverts, the Pakistani Army offers big rewards for tips about strange foreigners. In Karachi, neighbors notice odd comings and goings of people entering one particular home, and at least one neighbor alerts the government. The home turns out to be a safe house belonging to al-Qaeda leader Abdul Rahim al-Sharqawi, a.k.a. Riyadh the Facilitator. Al-Sharqawi will be arrested on February 7, 2002, along with 16 other suspected al-Qaeda operatives. All 17 men will be sent to the US-run Guantanamo prison in Cuba. Al-Sharqawi is the first significant capture of an al-Qaeda leader in Pakistan. Once in custody, he reveals leads that help with the arrest of others in the next months. (Kaplan et al. 6/2/2003)

Hassan Ali bin Attash. [Source: US Defense Department]Pakistani forces raid a safe house in Karachi, Pakistan, and arrest 17 suspected al-Qaeda operatives. All 17 will eventually be sent to the US-run Guantanamo prison in Cuba.
Abu Bara al-Taizi - One of them is Abu Bara al-Taizi (a.k.a. Zohair Mohammed Said), who attended the al-Qaeda summit in Malaysia in 2000 (see January 5-8, 2000) and was to be a hijacker for an Asian portion of the 9/11 attacks that never materialized. Al-Taizi will be handed to the US on February 27, and then transferred to Guantanamo a few months later.
Abdu Ali Sharqawi - The safe house is run by Abdul Rahim al-Sharqawi, a Yemeni commonly known as Riyadh the Facilitator. He is arrested as well, but he will not be handed to the US and then sent to Guantanamo until September 2004. (US Department of Defense 7/7/2008; US Department of Defense 10/25/2008) Another Guantanamo prisoner, Hassan Ali bin Attash, will later say that he and al-Sharqawi were held in a Jordanian prison for over a year. That would explain most of the time between al-Sharqawi’s arrest and his transfer to Guantanamo. (US Department of Defense 6/25/2008) The New York Times will later identify al-Sharqawi as one of the four most important al-Qaeda leaders captured in the first year after 9/11. (Risen and Filkins 9/10/2002)
Al-Sharqawi's Al-Qaeda Activity - According to al-Sharqawi’s Guantanamo file, he joined al-Qaeda after fighting in Bosnia in 1995 and was closely linked to many al-Qaeda leaders. For a time, he even took part in weekly planning meetings with Osama bin Laden and others. In the summer of 2001, he began running the safe house in Karachi. His file says that he photo-identifies 11 of the 9/11 hijackers and provides varying amounts of information on each of them. He estimates that he helped over 100 al-Qaeda operatives leave Pakistan in the post-9/11 crackdown before his safe house was shut down. 9/11 mastermind Khalid Shaikh Mohammed and hijacker associate Ramzi bin al-Shibh passed through his safe house in January 2002, a few weeks before the safe house is raided. As of late 2008, al-Sharqawi, al-Taizi, and nine others captured in the raid remain imprisoned in Guantanamo, while six others have been transferred out. (US Department of Defense 7/7/2008; US Department of Defense 10/25/2008) Most of the above is based on Guantanamo files leaked to the public in 2011 by the non-profit whistleblower group WikiLeaks. There are many doubts about the reliability of the information in the files (see April 24, 2011).
Neighbor's Tip Led to Raid - The safe house was discovered because the Pakistani Army asked the public for leads on the movements of suspicious foreigners. Apparently one or more neighbors pointed out the safe house (see Late 2001).

Mohammed Omar Abdul-Rahman. [Source: Public domain]In 2007, NBC News will report that the CIA uses aggressive interrogation techniques on at least 13 high-ranking al-Qaeda detainees between 2002 and 2004. These techniques are first used on Abu Zubaida, captured in March 2002 (see March 28, 2002), and some of the techniques are discontinued in the wake of the Abu Ghraib scandal around the middle of 2004 (see April 28, 2004), which is also around the time the CIA’s Inspector General issues a secret report suggesting many of these techniques could be a violation of an international treaty against torture (see May 7, 2004). Euphemistically called “enhanced interrogation,” these techniques include:

Exposure to extreme heat and cold.

The use of psychotropic drugs.

Waterboarding. However, waterboarding is allegedly only used on about four of the detainees (see May 2002-2003).
All 13 of these detainees will later be transferred to Guantanamo prison to stand trial before a military tribunal there (see September 2-3, 2006). (Two others similarly transferred - Abu Faraj al-Libbi and Abd al-Hadi al-Iraqi - are captured after the Abu Ghraib scandal and thus are not subjected to as many interrogation techniques.) (Windrem 9/13/2007) However, there are other “ghost detainees” not officially acknowledged as captured by the US government (see June 7, 2007). Some, like Hassan Ghul, Abdul Rahim al-Sharqawi, and Mohammed Omar Abdul-Rahman, are held in the same secret prison as most of the “official” high-ranking detainees later transferred to Guantanamo, so it would seem likely that aggressive techniques have been used on many of them as well. In 2007, President Bush will sign an executive order allowing the CIA to use most of these aggressive techniques again (see July 2007).

Usama al-Kini (a.k.a. Fahid Muhammad Ally Msalam). [Source: FBI]The New York Times reports that 10 out of the 24 al-Qaeda leaders considered most important by the CIA before 9/11 have been killed or captured. (Risen and Filkins 9/10/2002) The four most important figures considered still at large are:

Saif al-Adel (Egyptian).
Other figures considered still at large are:

Muhammad Salah (a.k.a. Nasr Fahmi Nasr Hasanayn) (Egyptian). (New York Times 9/10/2002)
The sixth leader believed killed is not named. One year after 9/11, US intelligence identifies 20 current high-ranking al-Qaeda leaders, though it is not mentioned who the six new leaders are who replaced some of the killed or captured leaders. (Risen and Filkins 9/10/2002) This list of leaders, while instructive, is curiously incomplete because it fails to mention al-Qaeda leaders known as important to US intelligence before 9/11, such as Hambali, Khallad bin Attash, Abd al-Rahim al-Nashiri, Thirwat Salah Shehata, Mustafa Abu al-Yazid, Ahmed Khalfan Ghailani, and Mohammed Jamal Khalifa. 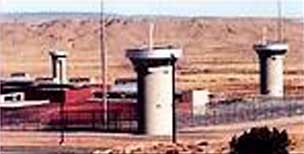 A local newspaper claims this is the CIA prison in Mauritania. [Source: Le RÃ©novateur Quotidien]Most top al-Qaeda leaders being held by the US has been in a secret CIA prison in Poland. But after the nonprofit watchdog group Human Rights Watch discloses the existence of the prisons, the prisoners are moved to a new CIA prison located in the North African nation of Mauritania. The New Yorker will report that “After a new government friendly to the US took power, in a bloodless coup d’état in August, 2005… it was much easier for the intelligence community to mask secret flights there.” (Hersh 6/17/2007) A Mauritanian newspaper places the prison at Ichemmimène, a town deep in the Sahara desert. (Le RÃ©novateur Quotidien 6/29/2007) ABC News lists eleven prisoners making the move:

Ibn al-Shaykh al-Libi (held in Pakistan then Poland).
Further, Hambali is a high level prisoner in US custody but he is being held elsewhere. (Ross and Esposito 12/5/2005; ABC News 12/5/2005) In 2007 Council of Europe, the European human rights monitoring agency, will reveal that the main CIA prison for high-level prisoners was in a Soviet-era military compound at Stare Kjekuty, in northeastern Poland. Lower-level prisoners from Afghanistan and Iraq were held in a military base near the Black Sea in Romania. The governments of Poland and Romania will continue to deny the existence of the prisons even after the US government admits to their existence. (Grey and Carvajal 6/8/2007) Eleven of the twelve prisoners mentioned above were subjected to the so-called “enhanced interrogation techniques” called torture by many. In 2006, Bush will announce that the CIA prisons are being emptied and high level prisoners will be transferred to the prison at Guantanamo Bay, Cuba (see September 2-3, 2006).
Some 'Ghost' Prisoners - But the list of prisoners being transferred will include some other names and will not include al-Shaykh al-Libi, Ghul, al-Sharqawi, or Abdul-Rahman. It will later come out that al-Sharqawi was probably sent to Guantanamo in late 2004 after being held in a Jordanian prison (see February 7, 2002). Ghul is a ‘ghost’ prisoner until he is turned over to the Pakistani government in 2006 (see (Mid-2006)). Al-Libi is similarly turned over to Libya (see Between November 2005 and September 2006). The fate of Abdul-Rahman remains unknown. (Ross and Esposito 12/5/2005)