This page can be viewed at http://www.historycommons.org/entity.jsp?entity=ad_council_1

Ad Council was a participant or observer in the following events: 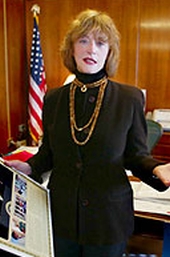 Charlotte Beers. [Source: New York Times]Former advertising executive Charlotte Beers officially assumes her duties as undersecretary of state for public diplomacy and public affairs. Beers, the former head of ad agencies Ogilvy & Mather and J. Walter Thompson, and who is best known for “branding” products like American Express credit cards and Head and Shoulders shampoo, was named to the position days after the 9/11 attacks, in part to help refurbish America’s image overseas. Secretary of State Colin Powell, who met Beers in 1995 when they both worked on the board of Gulf Airstream and who proposed her for the position, defended her selection in the Senate by explaining: “Well, guess what? She got me to buy Uncle Ben’s rice and so there is nothing wrong with getting somebody who knows how to sell something.” Powell says Beers’s job is to focus on what he calls “the branding of US foreign policy.” Time reporter Margaret Carlson will write that Beers’s new job is much different from selling rice or shampoo to American consumers: “Now Beers has to rebrand Osama bin Laden as a mass murderer to millions of Muslims who have never seen a 767 or a skyscraper, much less one flying into the other. She has to do it in languages, like Pashto and Dari, that don’t even have a word for terrorist. And all this without having control over Voice of America or Radio Free Europe.” Congress grants Beers over $500 million for her Brand America campaign. She says: “Public diplomacy is a vital new arm in what will combat terrorism over time. All of a sudden we are in this position of redefining who America is, not only for ourselves, but for the outside world.” Beers has no diplomatic experience. Her first efforts as undersecretary will be to provide a 24-page booklet in 14 languages accusing bin Laden of masterminding the 9/11 attacks, and, with the help of the Ad Council, to create and disseminate a poster throughout Arab countries offering up to $25 million for information leading to the arrest of highly placed terror suspects. Beers says that “sell might not be the operative word” to describe her job, she uses marketing vocabulary to describe her efforts: the US is an “elegant brand,” Powell and President Bush are “symbols of the brand,” and she wants to use athletes such as the NBA’s Hakeem Olajuwon to help market the American “brand.” (Carlson 11/14/2001; Stout 3/3/2003; Clair 8/13/2003; Rich 2006, pp. 31-32) Columnist Jeffrey St. Clair will observe: “Note the rapt attention Beers pays to the manipulation of perception, as opposed, say, to alterations of US policy. Old-fashioned diplomacy involves direct communication between representatives of nations, a conversational give and take, often fraught with deception… but an exchange nonetheless. Public diplomacy, as defined by Beers, is something else entirely. It’s a one-way street, a unilateral broadcast of American propaganda directly to the public, domestic and international—a kind of informational carpet bombing.” (Clair 8/13/2003)