This page can be viewed at http://www.historycommons.org/entity.jsp?entity=agus_budiman

Agus Budiman was a participant or observer in the following events: 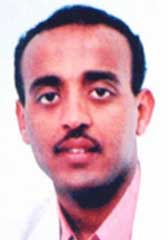 Ramzi bin al-Shibh. [Source: FBI]During these months, Hamburg al-Qaeda cell member Ramzi bin al-Shibh tries several times to get a US visa, but all his attempts fail, some possibly due to a link to the USS Cole bombing. In 2000, he tries to a get a visa three times from Germany, and once from Yemen, but all these attempts fail. He may also make a fifth attempt in May 2001, although the 9/11 Commission will not include that in their final report. One of the applications says he will be visiting Agus Budiman, a Hamburg associate, in Washington (see October-November 2000). (Lichtblau and Williams 10/24/2001; Abuza 12/24/2002; 9/11 Commission 8/21/2004, pp. 11-15

; McDermott 2005, pp. 209) Most accounts claim that bin al-Shibh is refused a visa on economic grounds based on fears that he will overstay his visa and work in the US. One official later suggests it was “only by luck” that he was turned down. (CBS News 6/6/2002; Finn 7/14/2002) However, Bin al-Shibh is in Yemen during the two months before the bombing of the Cole in that country, and investigators later conclude that he may have been involved in that attack (see October 10-21, 2000 and October 12, 2000). Possibly for this reason other accounts note that, as the London Times will put it, he was “turned down on security grounds.” (Kennedy 9/9/2002) Newsweek will later report, “One senior law-enforcement official told Newsweek that bin al-Shibh’s efforts to obtain a US visa were rebuffed because of suspicions that he was tied to the bombing of the USS Cole.” (Lichtblau and Williams 10/21/2001; Thomas 11/26/2001; BBC 9/14/2002) In addition, Al Jazeera journalist Yosri Fouda will say that according to his US intelligence sources, bin al-Shibh’s visas were “turned down because he was implicated in the USS Cole attack.” (TBS Journal 10/2002) But no journalist will ever question why this information didn’t lead to the unraveling of the 9/11 plot. Not only is there the obvious visa connection to Ziad Jarrah while he is training at a US flight school, but also during this same time period bin al-Shibh wires money to Marwan Alshehhi, Zacarias Moussaoui, and others, sometimes using his own name. (CBS News 6/6/2002) It is unclear how the US would know about his ties to the bombing at this time, though it’s possible that the consular official who reviews his fourth attempt in Berlin in October/November 2000 sees that al-Shibh entered Yemen one day before the attack and leaves shortly after it (see October 10-21, 2000). (9/11 Commission 8/21/2004, pp. 15

Mohammed Belfas, mentor of lead hijacker Mohamed Atta and a former roommate of his associate Ramzi bin al-Shibh, and Belfas’ companion Agus Budiman travel to the US. Belfas, who led an Islamic study group that Atta attended in Hamburg (see 1999) and also worked in a computer warehouse with Atta, bin al-Shibh, and Marwan Alshehhi, obtains an ID card in the same fraudulent way as the 9/11 hijackers later will. After 9/11, investigators will suspect the trip was related to the attacks, as Belfas and Budiman meet a bin Laden associate in the US (see October-November 2000). Belfas and Budiman stay with Budiman’s brother, who lives in the suburbs of Washington, DC, and Budiman takes a job as a night driver for a restaurant delivery service. Belfas often accompanies him to work and offers to help drive the delivery car if Budiman helps him get a US driver’s license, which he does not need to drive the delivery route, but merely claims to want as a souvenir. On November 4 they go to the Department of Motor Vehicles and Belfas gets a Virginia ID card, after Budiman affirms he lives in Arlington. Two days later Belfas uses the ID card to get a Virginia driver’s license. He returns to Germany soon after and has an alleged chance meeting on a train with bin al-Shibh, whom he tells about the trip and the driver’s license. (McDermott 2005, pp. 57-8) Several of the 9/11 hijackers will fraudulently obtain Virginia IDs in 2001 (see August 1-2, 2001). Bin al-Shibh will also explain his and Atta’s travel to Afghanistan to join al-Qaeda to another chance meeting on a train. (9/11 Commission 7/24/2004, pp. 165)

Agus Budiman. [Source: Der Spiegel]Mohammed bin Nasser Belfas and Agus Budiman, two Muslims living in Hamburg, Germany, travel to the US where they stay for two months. During this period, they meet with Abdurahman Alamoudi, a prominent Muslim activist whom the US has linked to Osama bin Laden. (Isikoff and Hosenball 10/1/2003) In 1994, the FBI learned that bin Laden sent Alamoudi money, which he then passed on to Sheikh Omar Abdul-Rahman, known as the “Blind Sheikh” (see Shortly After March 1994). (Myers 10/23/2003) Belfas will later say the purpose behind their meetings with Alamoudi was to request some favors. For instance, at Belfas’s request, Alamoudi writes a letter of recommendation for him. But after 9/11, investigators will suspect that the two were part of the Hamburg cell and that their trip to the US was related to the 9/11 attacks, for both Belfas and Budiman have connections to Mohamed Atta and other members of the cell. (Isikoff and Hosenball 10/1/2003) In 1998, Belfas shared an apartment with Hamburg cell member Ramzi bin al-Shibh, led a prayer group attended by Atta and others (see 1999), and worked in a computer warehouse packing boxes with Atta, bin al-Shibh, and Marwan Alshehhi. (McDermott 9/1/2002)