This page can be viewed at http://www.historycommons.org/entity.jsp?entity=al-khalifa_bin_laden

Al-Khalifa bin Laden was a participant or observer in the following events:

Sources who know bin Laden claim his stepmother, Al-Khalifa bin Laden, has the first of two meetings with her stepson in Afghanistan during this period. This trip was arranged by Prince Turki al-Faisal, then the head of Saudi intelligence. Turki was in charge of the “Afghanistan file” for Saudi Arabia, and had long-standing ties to bin Laden and the Taliban since 1980. (Mayer and Szechenyi 11/5/2001)

Spring 2000: Saudi Suggestion to Track Bin Laden’s Stepmother in Planned Meeting with Him Is Rejected

Sources who know Osama bin Laden later claim that his stepmother, Al-Khalifa bin Laden, has a second meeting with her stepson in Afghanistan (her first visit took place in the spring of 1998 (see Spring 1998)). The trip is approved by the Saudi royal family. The Saudis pass the message to him that “‘they wouldn’t crack down on his followers in Saudi Arabia’ as long as he set his sights on targets outside the desert kingdom.” In late 1999, the Saudi government had told the CIA about the upcoming trip, and suggested placing a homing beacon on her luggage. This does not happen—Saudis later claim they weren’t taken seriously, and Americans claim they never received specific information on her travel plans. (Mayer and Szechenyi 11/5/2001; Gellman 12/19/2001) 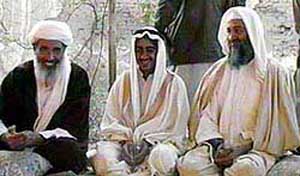 Mohammed bin Laden (center), the son of Osama bin Laden (right), marries the daughter of Mohammed Atef (left). [Source: Al Jazeera]Bin Laden attends the wedding of his son Mohammed in Kandahar, Afghanistan. Although Osama bin Laden is supposedly long estranged from his family, bin Laden’s stepmother, two brothers, and sister are also said to attend, according to the only journalist who was invited. (Reuters 3/1/2001; MacKay 10/7/2001)

Osama bin Laden calls his stepmother and says, “In two days, you’re going to hear big news and you’re not going to hear from me for a while.” (Fenton and Steele 10/2/2001) US officials will later tell CNN that “in recent years they’ve been able to monitor some of bin Laden’s telephone communications with his [step]mother. Bin Laden at the time was using a satellite telephone, and the signals were intercepted and sometimes recorded.” (Shenon and Johnston 10/2/2001) Stepmother Al-Khalifa bin Laden, who raised Osama bin Laden after his natural mother died, is apparently waiting in Damascus, Syria, to meet Osama there, so he calls to cancel the meeting. (MacKay 10/7/2001) They had met periodically in recent years. Before 9/11, to impress important visitors, NSA analysts would occasionally play audio tapes of bin Laden talking to his stepmother. The next day government officials say about the call, “I would view those reports with skepticism.” (Ensor and O'Connor 10/2/2001) Bin Laden gave his natural mother a similar warning some months ago that was also overheard by the NSA (see Spring-Summer 2001).