This page can be viewed at http://www.historycommons.org/entity.jsp?entity=al_lenhardt_1

Al Lenhardt was a participant or observer in the following events:

9:48 a.m. September 11, 2001: Capitol Building Evacuated due to Reports of Approaching Plane, but Evacuation Is Chaotic 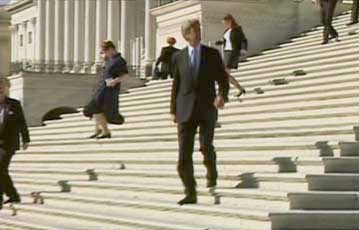 Senator John Kerry looks up to the sky as he and others evacuate. [Source: CBC]The Capitol building in Washington, DC is evacuated. (Associated Press 8/21/2002) It is the first time in US history this has ever happened. (Zuckman 9/12/2001; Mitchell and Seelye 9/12/2001) Both the Senate and the House are in session at the time. (CNN 8/17/2002) Capitol Police officers go through the building and order people to leave at once. (Lancaster and Dewar 9/12/2001; CNN 9/11/2002)
Reports of Plane Approaching the Capitol - The evacuation appears to be in response to reports of a plane heading toward the Capitol. (Associated Press 9/11/2001; CNN 8/17/2002; Bamford 2004, pp. 80-81) According to CNN congressional correspondent Dana Bash, “the Capitol Police were hearing, in their radio, that there was a plane—another plane in the air, likely headed for the Capitol.” (CNN 9/11/2006) When a Capitol Police officer instructs Senate Majority Leader Tom Daschle (D-SD) to leave the building, he says: “We have word that an airplane is heading this way and could hit the building anytime. You need to evacuate.”
'Nothing Orderly' about Evacuation - However, there are problems with the evacuation. According to Daschle, “The fire alarm system, which was working in the nearby Senate office buildings, was never activated in the Capitol, so there were people who weren’t aware that an evacuation was taking place.” Also, some individuals are reluctant to leave. (Daschle and D'Orso 2003, pp. 109-110) Rep. Bob Stump (R-AZ) will recall: “They tried to throw me out three times, but they didn’t succeed. I figured I was safer in the building than out on the street.” (Associated Press 9/11/2001) Daschle will recall that there is “nothing orderly” about the evacuation. Outside the building “No one knew what to do or where to go. People congregated on the grass and in the parking lot. Senators and staff were mixed in with tourists, all staring up at the sky, wondering what might be headed our way.” (Daschle and D'Orso 2003, pp. 110) CNN will report, “[S]ome of the most high ranking officials in the United States government were just kind of scattered around this area without a gathering point.” (CNN 9/11/2006)
Sergeant at Arms Concerned over Poor Security - Al Lenhardt, the Senate’s sergeant at arms, will later say how alarmed he was “to see members of Congress and their staffs mixed in with visitors and passersby wandering in the open around the Capitol grounds. One of the tactics that terrorists have been known to employ is to create a diversion to move their intended target to the area where the actual attack will take place. Al imagined a bomb or gunfire erupting right there on the lawn outside the Capitol.” (Daschle and D'Orso 2003, pp. 111) Eventually, many of the members of Congress go to the Capitol Police headquarters, which then serves as their command center for the day (see (9:55 a.m. and After) September 11, 2001 and (10:00 a.m.-6:30 p.m.) September 11, 2001). (CNN 9/11/2002; Daschle and D'Orso 2003, pp. 112)