This page can be viewed at http://www.historycommons.org/entity.jsp?entity=alex_shipley_1

Alex Shipley was a participant or observer in the following events:

Donald Segretti. [Source: Spartacus Educational]Three attorneys—one the assistant attorney general of Tennessee, Alex Shipley—are asked to work as so-called “agent provocateur” for the Campaign to Re-elect the President (CREEP), an organization working to re-elect President Nixon (see October 10, 1972). The three tell their story to Washington Post reporter Carl Bernstein in late September 1972, and Bernstein’s colleague Bob Woodward learns more from his FBI source, “Deep Throat,” days later (see October 7, 1972 and October 9, 1972). They all say they were asked to work to undermine the primary campaigns of Democratic presidential candidates by the same man, Donald Segretti, a former Treasury Department lawyer who lives in California. Segretti will later be identified as a CREEP official. Segretti, the attorneys will say, promises them “big jobs” in Washington after Nixon’s re-election (see November 7, 1972). All three says they rejected Segretti’s offers (see June 27-October 23, 1971). Segretti himself will deny the allegations, calling them “ridiculous.”
Part of a Larger Pattern? - Bernstein and Woodward connect the Segretti story to other Nixon campaign “dirty tricks” they are already aware of, including efforts by Watergate burglar James McCord (see June 19, 1972) to “investigate” reporter Jack Anderson, attempts by Watergate surveillance man Alfred Baldwin (see June 17, 1972) to infiltrate Vietnam Veterans Against the War, Watergate burglar E. Howard Hunt’s successful attempts to electronically “bug” Democratic campaign headquarters (see May 27-28, 1972) and his investigation of Democratic presidential candidate Edward Kennedy (see June 19, 1972), and McCord’s rental of an office next to the offices of Democratic presidential candidate Edmund Muskie. To the reporters, the Segretti story opens up speculation that the Nixon campaign had undertaken political espionage efforts long before the Watergate burglary. In their book All the President’s Men, Bernstein and Woodward write, “Watergate could have been scheduled before the president’s re-election chances looked so good and perhaps someone had neglected to pull the plug.” Bernstein has heard of CIA operations such as this mounted against foreign governments, called “black operations,” but sometimes more colloquially called “mindf_cking.” (Bernstein and Woodward 1974, pp. 114-115)
Segretti a 'Small Fish in a Big Pond' - An FBI official investigating CREEP’s illegal activities will call Segretti “a small fish in a big pond,” and will say that at least 50 undercover Nixon operatives have worked around the country to disrupt and spy on Democratic campaigns. The political intelligence and sabotage operation is called the “offensive security” program both by White House and CREEP officials. FBI investigators will find that many of the acts of political espionage and sabotage conducted by Segretti and his colleagues are traced to this “offensive security” program, which was conceived and directed in the White House and by senior CREEP officials, and funded by the secret “slush fund” directed by CREEP finance manager Maurice Stans (see September 29, 1972). FBI officials will refuse to directly discuss Segretti’s actions, saying that he is part of the Watergate investigation (see 2:30 a.m.June 17, 1972), but one FBI official angrily calls Segretti’s actions “indescribable.”
White House Connections Confirmed - In mid-October 1972, the Washington Post will identify Dwight Chapin, President Nixon’s appointments secretary, as the person who hired Segretti and received reports of his campaign activities. Segretti’s other contact is Hunt. Segretti also received at least $35,000 in pay for his activities by Nixon’s personal lawyer, Herbert Kalmbach. (Meyer 1/31/1973) 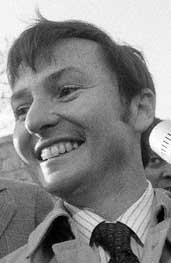 Donald Segretti. [Source: Bettmann / Corbis]One of the Nixon campaign’s “agents provocateur,” California lawyer Donald Segretti, attempts to recruit three former colleagues to work with him in disrupting and interfering with Democratic campaign events. Segretti met the three, Alex Shipley, Roger Lee Nixt, and Kenneth Griffiths, while all three served as captains in the Army’s Judge Advocate General Corps during the Vietnam War. Shipley, now an assistant attorney general in Tennessee, later recalls (see October 7, 1972) that according to Segretti, “Money would be no problem, but the people we would be working for wanted results for the cash that would be spent.” Segretti tells the three that they will need false identification papers and fake names, asks Shipley to recruit five more people for the job, and says their primary task will be to disrupt the campaign schedules of Democratic candidates and obtain information from their campaign organizations. Shipley will recall that Segretti tells him not to reveal the names of the five operatives he recruits, not even to Segretti; in return, Segretti can never tell Shipley where the money to fund the operations is coming from. According to Shipley: “I said, ‘How in hell are we going to be taken care of if no one knows what we’re doing?’ and Segretti said: ‘Nixon knows that something is being done. It’s a typical deal.’ Segretti said, ‘Don’t-tell-me-anything-and-I-won’t-know.’”
Working for Nixon, Pretending to Work for Democrats - Segretti gives Shipley an example of what he might do as a campaign operative: “He [Segretti] said: ‘For instance, we’ll go to a [Democratic presidential candidate Edward] Kennedy rally and find an ardent Kennedy worker. Then you say that you’re a Kennedy man too but you’re working behind the scenes; you get them to help you. You send them to work for [Democratic presidential candidate Edmund] Muskie, stuffing envelopes or whatever, and you get them to pass you the information. They’ll think that they are helping Kennedy against Muskie. But actually you’re using the information for something else.’ It was very strange.… I said, ‘Well, who will we be working for?’ He said, ‘Nixon’ and I was really taken aback, because all the actions he had talked about would have taken place in the Democratic primaries. He said the main purpose was that the Democrats have an ability to get back together after a knockdown, drag-out campaign. What we want to do is wreak enough havoc so they can’t.”
Turned Down - Shipley, Nixt and Griffiths all turn Segretti down; a fourth ex-JAG lawyer, Peter Dixon, will later confirm that he, too, turned down Segretti, but before Segretti could reveal any details to him. Shipley is so concerned that he asks a friend who worked for Senator Albert Gore (D-TN) what to do, and the friend advises him to “string [Segretti] along to see what he’s up to.” At a subsequent meeting, Segretti tells Shipley that he is recruiting lawyers because he doesn’t want to break any laws, and says that the emphasis of the operations is to “have fun” as opposed to committing blatant criminal acts. (Bernstein and Woodward 10/10/1972) Some of the “fun” activities include waving signs at rallies such as “If you like Hitler, you’ll love Wallace. Vote Muskie!” Perhaps the most well-known trick is the airplane hired to fly over the Democratic National Convention in Miami (see July 13, 1972) trailing the banner, “Peace Pot Promiscuity—Vote McGovern.” (Reeves 2001, pp. 531) Segretti’s last attempt to recruit Shipley is October 23, 1971.
Segretti Always 'Well-Financed' and at Centers of Campaign Activity - Shipley will recall that “the one important thing that struck me was that he seemed to be well-financed. He was always flying across the country. When he came to Washington in June he said he had an appointment at the Treasury Department and that the Treasury Department was picking up the tab on this—his plane and hotel bill.” Segretti later tells Shipley that “it wasn’t the Treasury Department that had paid the bill, it was the Nixon people. [Segretti] said, ‘Don’t ask me any names.’” According to travel documents, Segretti flies to, among other places, Miami; Houston; Manchester, New Hampshire; Knoxville; Los Angeles; New York City; Washington; Salt Lake City; Chicago; Portland, Oregon; Albuquerque; Tucson; San Francisco; and several other California cities. FBI investigations will find that the most concentrated areas of Nixon campaign undercover activity are in Illinois, New York, New Hampshire, Massachusetts, California, Texas, Florida, and Washington, DC. (Bernstein and Woodward 10/10/1972)