This page can be viewed at http://www.historycommons.org/entity.jsp?entity=alexander_solzhenitsyn_1

Alexander Solzhenitsyn was a participant or observer in the following events: 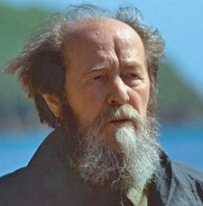 Alexander Solzhenitsyn. [Source: Catholic Education (.org)]Famed Soviet dissident Alexander Solzhenitsyn speaks at an AFL-CIO meeting in Washington. Senator Jesse Helms (R-NC), a hardline conservative hawk who, in the words of author J. Peter Scoblic, is “an absolutist who saw the Cold War as a struggle being waged on ‘every continent’ and who was eager to speak up ‘in favor of freedom and against Communism, wherever it was found,’” attempts to arrange a meeting between Solzhenitsyn and President Ford. Ford, with an upcoming trip to the USSR and a meeting with Soviet leader Leonid Brezhnev, refuses, fearing that meeting with Solzhenitsyn might sour the meeting with Brezhnev. (Ford overrides the arguments made by his chief of staff, Dick Cheney, who presses Ford to meet with the dissident.) Conservatives are outraged at what they see as naked political amorality—refusing to meet with a legitimate anti-Communist hero in order to placate a Communist leader. Conservative pundit George Will writes that the Ford White House is “showing a flair for baseness that would have stood them in good stead with the previous [Nixon] administration.” (Scoblic 2008, pp. 76, 78)

President Ford signs the “Helsinki Final Act,” the final measure of the Helsinki Accords. This set of agreements, negotiated by the Conference on Security and Cooperation in Europe, settles issues left standing since the end of World War II. Among other things, the Accords finalize post-war borders of a number of European nations, effectively legitimizing Soviet control over the Baltic states of Lithuania, Latvia, and Estonia. The Accords are signed by 35 nations, including the US, Canada, and every European nation except for Albania and Andorra. American conservatives decry the signing, calling it equivalent to the Yalta agreement of 1945, which they say gave far too much control of Eastern Europe to the Soviet Union after the war. Famed Soviet dissident Alexander Solzhenitsyn (see Summer 1975) denounces the Accords as “the betrayal of Eastern Europe” and says that “an amicable agreement of diplomatic shovels will bury and pack down corpses still breathing in a common grave.” (Scoblic 2008, pp. 76-77)

Governor Ronald Reagan (R-CA) runs for the presidency on a staunchly conservative platform of absolute anti-Communism, widespread reduction of government, and strict moral virtue. Many Republicans see Reagan as a more charismatic successor to the hardline principles espoused by former presidential candidate Barry Goldwater (R-AZ); Reagan also has the virtue of not being “tainted” by any association with Watergate. Reagan condemns the Soviet Union in near-apocalpytic terms, and denounces his Republican opponent, President Ford, both for refusing to meet with Soviet dissident Alexander Solzhenitsyn (see Summer 1975) and for signing the Helsinki Accords (see August 1975), which he says gives “the American seal of approval [for] the Soviet empire in Eastern Europe.” Reagan is an absolute opponent of any sort of detente with the Soviets. His campaign echoes strongly with conservative Republicans; he nearly defeats Ford in the all-important New Hampshire primary, wins 12 states in the general primary, and reveals, in the words of author J. Peter Scoblic, “the antinegotiation attitude once the exclusive province of conservatives now appealed to rank-and-file Republicans.” Reagan loses the primary battle to Ford, but the effects are long-lasting. By the time of the Republican convention, Ford abandons the use of the term “detente” altogether, and Reagan supporters succeed in having a “Morality in Foreign Policy” plank added to the Republican platform which repudiates detente, acclaims Solzhenitsyn as a hero, and calls the Helsinki Accords a secret agreement to give unprecedented power to the USSR. Scoblic calls Reagan’s plank “a shocking rebuke to a sitting US president from his own party.” Ford is furious, but is persuaded not to oppose it by his chief of staff, Dick Cheney. (Scoblic 2008, pp. 77-78)