This page can be viewed at http://www.historycommons.org/entity.jsp?entity=alexander_yakovlev_1

Alexander Yakovlev was a participant or observer in the following events: 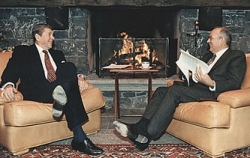 Reagan and Gorbachev at the Geneva summit meeting. [Source: Ronald Reagan Library]The long-awaited summit meeting between President Ronald Reagan and Soviet Premier Mikhail Gorbachev takes place in Geneva. The meeting, later known as the “fireside summit,” comes after months of Gorbachev’s reforms in the USSR—“glasnost,” or openness to government transparency; “perestroika,” a retooling of the moribund Stalinist economy; and a dogged anti-alcohol campaign, among others. Gorbachev has packed the Kremlin with officials such as new Foreign Minister Edvard Shevardnadze and chief economist Alexander Yakovlev, who back his reform campaigns. (Yakolev has even proposed democratization of the Soviet Communist Party.) Reagan and Gorbachev have exchanged several letters which have helped build relations between the two leaders. Reagan, unlike some of his hardline advisers, is excited about the summit, and has diligently prepared, even holding mock debates with National Security Council member Jack Matlock playing Gorbachev. Reagan has also quietly arranged—without the knowledge of his recalcitrant hardline advisers—for an extension of the scheduled 15-minute private meeting between himself and Gorbachev. The two actually talk for five hours. Nothing firm is agreed upon during this first meeting, but as Reagan later recalls, it marks a “fresh start” in US-Soviet relations. Gorbachev returns to the USSR promoting his and Reagan’s agreement on the need to reduce nuclear arms; Reagan presents the summit as a “victory” in which he did not back down to Soviet pressure, but instead emphasized the need for the Soviets to honor basic human rights for their citizens. Gorbachev realizes that Reagan’s abhorrence of nuclear weapons and his desire for a reduction in nuclear arms (see April 1981 and After) is personal and not shared by many of his administration’s officials, much less the US defense industry. As a result, he focuses on personal contacts and appeals to Reagan, and puts less stock in formal negotiations between the two. (Savranskaya and Blanton 11/22/2005; Scoblic 2008, pp. 139-140; Margaret Thatcher Foundation 1/23/2008)