This page can be viewed at http://www.historycommons.org/entity.jsp?entity=amo_bishop_roden_1

Amo Bishop Roden was a participant or observer in the following events:

May 15, 1995: Site of Branch Davidian Massacre Now a ‘Shrine’ to Right-Wing Extremists 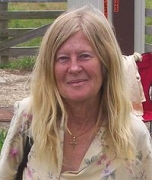 Amo Roden. [Source: Amo Roden]Reporter Peter J. Boyer publishes an article in the New Yorker depicting the almost-mesmerizing attraction the scene of the 1993 Branch Davidian massacre (see April 19, 1993) has over radical right-wingers. The site of the Branch Davidian compound, on a hill outside Waco, Texas, has been razed and burned over, but enough debris remained for Amo Bishop Roden to come to the site, fashion a crude shack from fence posts, pallets, and sheet metal, and take up residence there. Roden, the wife of former Davidian leader George Roden (see November 3, 1987 and After), says God told her to come to the site to keep the “end-time church” of Davidian leader David Koresh alive. She makes money by selling Davidian memorabilia, including T-shirts and photos. “People come by every day,” she says. “And usually it’s running around a hundred a day.” Most of the people who come to the site are tourists, she says, “but some are constitutional activists.” Boyer writes that Roden’s “constitutional activists” are “members of that portion of the American extreme fringe which believes the FBI raid on the Davidian compound exemplified a government at war with its citizens.” Boyer writes that those radical fringe members regard the Davidian compound as “a shrine,” and view April 19, the date of the Davidians’ destruction, as “a near-mystical date, warranting sober commemoration.” Last April 19, two things occurred to commemorate the date of the conflagration: the unveiling of a stone monument listing the names of the dead, and the bombing of a federal building in Oklahoma City (see 8:35 a.m. - 9:02 a.m. April 19, 1995). The man responsible for the Oklahoma City bombing, Timothy McVeigh, has himself made the pilgrimage to Waco (see March 1993). Alan Stone, a professor of psychiatry and law at Harvard, says the mistakes made by the federal government at Waco will continue to fuel right-wing paranoia and conspiracy theories until the government acknowledges its mistakes: “The further I get away from Waco, the more I feel that the government stonewalled. It would be better if the government would just say, ‘Yes, we made mistakes, and we’ve done this, this, and that, so it won’t happen again.’ And, to my knowledge, they’ve never done it.” (Boyer 5/15/1995; Amo Roden 2010) Religious advocate Dean Kelley writes that Roden collects money from tourists and visitors, ostensibly for the Davidians who own the property, but according to Kelley, the Davidians never receive any of the donations. (Dean M. Kelley 5/1995) Four years after Boyer publishes his article, a similar article, again featuring an interview with Roden, is published in the Dallas Morning News. Paulette Pechacek, who lives near the property, will say of her and her husband, “We expected it [the visits] for months afterwards, but it surprises us that people still come.” (Plohetski 6/27/1999)

The visitors’ center at the new Branch Davidian church outside Waco, Texas. [Source: Waco Cult (.com)]Workers break ground on the Mt. Carmel property near Waco, Texas, for a new Branch Davidian church. The Davidian compound that stood there before was burned to the ground six years ago during a standoff with FBI agents (see April 19, 1993); only about 12 Davidians remain in the area. The project is led by radio talk show host Alex Jones, who says the Davidians were victims of “a government cover-up of its violation of the First Amendment.” Jones, whose radio show features radical conspiracy theories and a variety of right-wing and gun advocates as guests, says of the church raising: “This is a statement. This is about saying the witch hunt of 1993 is over.” The party of workers includes the parents of Davidian leader David Koresh, who died during the standoff. Koresh’s stepfather Roy Haldeman says of the project, “I feel good about it.” He lived at the compound during 1992 and the early months of 1993. Jones says he and others have been talking about building a structure on the site for three years. “All of it, it’s all about public opinion,” he says. “We know that now is the perfect time, that’s why we’re doing it.… This is a monument to the First Amendment. You think about speech and the press, but it is also religion and the expression thereof.” During an interview with an Associated Press reporter, he wears a pin reading, “You burn it, we build it.” Jones has contributed $1,000 to the project, and says it will be complete in two or three months. The ownership of the Mt. Carmel property is in dispute. At least four parties claim it: Clive Doyle and a group of Davidians who lived at the compound; Douglas Mitchell, who claims to be the divinely appointed leader of the Branch Davidian Seventh-day Adventist Association; Amo Bishop Roden (see May 15, 1995), who has said that she was married “by contract” to the late George Roden, the former Branch Davidian leader (see November 3, 1987 and After); and Thomas Drake, Roden’s old bodyguard. Doyle says his group has maintained the grounds, erected a memorial to the Davidians slain in the standoff, and paid the taxes on it. He says he has been leading a small number of congregants in Bible studies in the Waco area and intends to lead services at the new church. One volunteer working on the church is Mike Robbins of Austin, a customer relations manager at a car dealership. He says he is not associated with the Davidians, but has constitutional concerns about what happened at the compound: “I came out here to support the First Amendment rights and the rights of every citizen,” he says. “There is a lack of tolerance in this country and I’m here to fight that.” (Associated Press 9/19/1999; Snyder 1/20/2000; Witherspoon 5/3/2000) In November 1999, Jones is fired from his job as a host on Dallas’s KJFK-FM after refusing to stop broadcasting interviews with surviving Davidians, and for refusing to stop discussing his theories about government conspiracies surrounding the April 1993 debacle. Jones moves to a public-access cable TV channel and over the Internet. (Snyder 1/20/2000) The target date for the completion of the project is pushed back to April 19, 2000, the seven-year anniversary of the conflagration at the former compound. About $40,000 has been raised for the project, volunteers say, but $50,000 more is needed. Doyle and his mother, Edna, live on the property in a mobile home. A good number of the volunteers helping build the church are anti-government activists who share theories about the government’s secret plan to destroy the Davidians, many of which are aired and discussed on the air by Jones, who regularly features survivors of the 1993 debacle on his cable show. The Michigan Militia has donated $500, and vendors sell T-shirts emblazoned with machine guns and slogans such as “Death to the New World Order.” Construction work is only done on Sundays, in deference to the Davidians’ Saturday Sabbath. (Ross 12/22/1999; Snyder 1/20/2000) The church will be dedicated for services on April 19, 2000. The construction costs will come to at least $92,000. Some of the surviving Davidians do not want to worship at the new church, but prefer to meet in private homes. (Ross 12/22/1999; Mabin 4/19/2000) At the dedication service, former Attorney General Ramsey Clark says: “This is an occasion for joy, because from the ashes has risen the church. The world must never forget what the United States government did here.” Clark is one of several lawyers representing the surviving Davidians in a wrongful-death lawsuit against the US government (see April 1995). Five Michigan Militia members, dressed in combat fatigues and berets, will present sect members with a commemorative plaque from their group for the new building. (Hancock 4/20/2000) Doyle will eventually win a court verdict awarding him ownership of the land. (McKenna 8/11/2002)