This page can be viewed at http://www.historycommons.org/entity.jsp?entity=anchorage_second_amendment_task_force_1

Anchorage Second Amendment Task Force was a participant or observer in the following events: 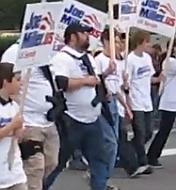 Supporters of Joe Miller march while carrying assault weapons. [Source: Bob Moore / TPMDC]Supporters of Alaska Senate candidate Joe Miller (R-AK), who has the support of former Governor Sarah Palin (R-AK) and the Tea Party Express against Republican incumbent Lisa Murkowski (R-AK), march in the streets of Anchorage brandishing assault weapons. Miller later explains the event on ABC News: “You know, guns are a pretty big thing up here in Alaska. In fact, per capita, we probably have the highest rate of gun ownership in the nation. The Second Amendment’s very important to people up here in Alaska. So you know, it’s not unusual to walk into a Wal-Mart, or to walk into a gas station, and see people carrying guns. Frankly, I wasn’t in that Hummer [the large SUV accompanying the marchers]. I was out there walking, shaking hands. But you know, it’s not unusual in political rallies, it’s not unusual in parades, to see that type of thing. Probably though, in the lower 48, it does raise some eyebrows.” (McMorris-Santoro 7/19/2010; Klein 7/19/2010) The supporters shown in a video of the march are later identified as members of the Anchorage Second Amendment Task Force, a gun rights group. The organization endorsed Miller after he showed up at a forum over the summer that Murkowski declined to attend. Task Force leader Chuck Green later tells a reporter that his members “like[d] Miller’s straight forward answers to questions.… [S]ome of the guys in the forum decided to attend the parade supporting Miller. It’s… as simple as that.” (Elliot 7/23/2010) Miller says that he welcomes the support of the Tea Party Express even after its spokesman, Mark Williams, was ejected from the National Tea Party Federation for making explicitly racist comments (see July 17-18, 2010 and July 19-23, 2010). Miller says his campaign does not endorse such views: “I think it’s appropriate for us to make an unequivocal statement that this campaign is not, in any way, racist,” he says. “In fact, we judge people by their character, rather than the color of their skin. We have a number of minorities that are assisting us in this campaign. My perspective of it is that we will embrace, though, the help that’s brought to this campaign by those that are really supportive of constitutional limited government. And I think that’s the direction this country’s gotta go to rescue it from the financial insolvency that it’s in right now.” (Klein 7/19/2010) Miller will later be shown to have extensive ties to Alaska’s right-wing militia movement (see July 23, 2010 and October 18, 2010). Many of those militia organizations espouse racist beliefs.