This page can be viewed at http://www.historycommons.org/entity.jsp?entity=andrei_gromyko_1

Andrei Gromyko was a participant or observer in the following events:

A week after President Reagan publicly denounced the Soviet Union for shooting down a Korean Airlines passenger jet (see September 1, 1983 and September 5, 1983), Secretary of State George Shultz meets with Soviet Foreign Minister Andrei Gromyko. Gromyko later recalls the conversation as “the sharpest exchange I ever had with an American secretary of state, and I have had talks with 14 of them.” The Reagan administration will deny Gromyko permission to fly into New York City, where he is scheduled to attend the opening session of the United Nations General Assembly. (Scoblic 2008, pp. 131)

Mid-September 1983 and After: KAL 007 Incident Causes Further Rift between US, USSR 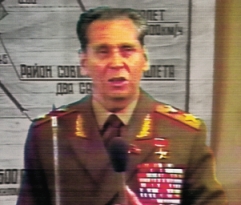 Soviet Marshal Nikolai Ogarkov gives a press conference regarding the KAL 007 shootdown. [Source: Central Intelligence Agency]The Soviet Union, flustered and angry at the harsh denunciations heaped on it by the US after their shootdown of a Korean Airlines passenger jet (see September 1, 1983, September 5, 1983, and Mid-September, 1983), reacts badly to the US’s response. Between the KAL incident and other episodes—President Reagan’s terming the USSR an “evil empire” (see March 8, 1983), the refusal of the US to negotiate on arms reduction (see April 1983-December 1983), and the US’s launch of the Strategic Defense Initiative missile defense program (see April 1983-December 1983), the Soviets are not prepared to accept the US’s position on the shootdown, nor are they prepared to accept responsibility for shooting down a passenger plane full of civilians. Instead, the KAL incident provides what Anatoly Dobrynin, the Soviet ambassador to the US, will later call “a catalyst for the angry trends that were already inherent in relations during the Reagan presidency.” Newly installed Soviet Premier Yuri Andropov issues a statement saying that US-Soviet relations cannot improve so long as Reagan is president: “If anybody ever had any illusions about the possibility of an evolution to the better in the policy of the present American administration, these illusions are completely dispelled now.” Soviet statements begin referring to the danger of war and US nuclear first strikes. The Soviet press calls Reagan a “madman” and compares him to Adolf Hitler. Foreign Minister Andrei Gromyko worries that “the world situation is now slipping towards a very dangerous precipice.” (Scoblic 2008, pp. 132)