This page can be viewed at http://www.historycommons.org/entity.jsp?entity=andrew_beeny_1

Andrew Beeny was a participant or observer in the following events: 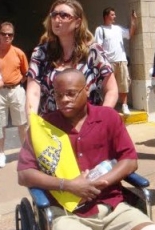 Kenneth Gladney being wheeled around a protest in Mehlman, Missouri. [Source: Common Cents (.com)]Anti-health care reform protesters hold a rally in Mehlville, Missouri, to protest what they say was the beating of fellow protester Kenneth Gladney by “union thugs” (see August 6-8, 2009). Gladney is prominently featured in the protest, sitting in a wheelchair with his knee bandaged and holding a flag emblazoned with the words, “Don’t Tread on Me.” Gladney says he was beaten by a number of members of the Service Employees International Union. The SEIU says that Gladney is inflating the confrontation, and that he initiated the fight. Gladney has become a cause celebre among conservative anti-reformists, with talk show hosts Rush Limbaugh and Bill O’Reilly, among others, telling his story to their listeners. “Limbaugh gave the address” of the SEIU offices, one protester says. “This is just a demonstration of numbers.” Gladney’s lawyer, David Brown, reads a statement to the crowd of around 200 people, saying on Gladney’s behalf: “A few nights ago there was an assault on my liberty, and on yours, too. This should never happen in this country.” Brown then tells the crowd that Gladney is unemployed and has no health care insurance, and is accepting donations towards his care. Brown would not elaborate as to what, if any, legal strategies he and his client are planning. (Gustin 8/9/2009)
Inflating the Story - Gladney’s story has taken on new details as he has retold it to a variety of conservative talk show hosts and to Mary Katharine Ham of the Weekly Standard. In its latest iteration, he was mauled by a number of SEIU “thugs” who drove him to the ground and “brutally” beat him while screaming racial epithets. Three of his assailants, he says, were wearing SEIU shirts. Unfortunately for his story, the video uploaded to YouTube which Ham says proves his story actually shows something quite different. The injured party in the video is clearly identifiable as an SEIU member. Gladney is pulled to the ground by another SEIU member, but no one punches or kicks him; instead, he bounces to his feet and walks off camera. Media Matters reporter Eric Boehlert writes: “The only real mystery from the incident is why Tea Party member Gladney, who’s seen up-close after the brief encounter walking around and talking to people and who appears to be injury-free, then decided to go to the hospital to treat injuries to his ‘knee, back, elbow, shoulder, and face.’ All that from a two-second fall to the pavement? Also unclear is why he contacted a newspaper reporter, or why his attorney wrote up lavish accounts and sent them to conservative bloggers, or why Gladney and his attorney appeared on Fox News.” (Boehlert 8/8/2009; Ham 8/8/2009)
Lied about Health Insurance - Days later, other elements of Gladney’s story will change. Brown will confirm that he can no longer represent Gladney because he was involved in the altercation as a “witness” and therefore cannot be involved in any legal proceedings on Gladney’s behalf. Brown will also confirm that Gladney’s claim not to have health care insurance is “misinformation.” Brown will say, “He’s just unemployed [and] has insurance through his wife.” Brown has identified himself as a “friend” of Gladney’s, but is unsure what kind of job Gladney had before his alleged layoff, and is not sure what Gladney’s wife does for a living, either. St. Louis Tea Party organizer Bill Hennessy confirms that Gladney is still soliciting donations to help him pay for his injuries, even though he has insurance: “Well, who doesn’t need a donation? If people want to give him a donation because he’s injured and unemployed, that’s up to them.” Brown says Gladney has raised about $1,100 in donations so far. Reporter Daphne Eviatar confirms that Gladney appears uninjured in the video, and only began appearing in a wheelchair after landing interviews on Fox News. Brown says his brother, Andrew Beeny, will represent Gladney, and that neither he nor Beeny have copies of Gladney’s medical report. Brown says Gladney intends to sue both the individuals who he claims attacked him and the SEIU, since “unions have a 100-year history of intimidation.” (Eviatar 8/10/2009)