This page can be viewed at http://www.historycommons.org/entity.jsp?entity=andrew_shirvell_1

Andrew Shirvell was a participant or observer in the following events: 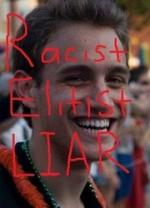 A defaced photograph of Chris Armstrong, posted on an Internet blog by Assistant Attorney General Andrew Shirvell. [Source: Think Progress]Andrew Shirvell, the assistant attorney general for the state of Michigan, wages an Internet campaign against a gay college student. In April, Shirvell, identifying himself as “Concerned Michigan Alumnus,” begins posting a series of attacks on his blog against Chris Armstrong, an openly gay student at the University of Michigan, after Armstrong is elected student assembly president. Shirvell’s opening post reads in part: “Welcome to ‘Chris Armstrong Watch.‘… This is a site for concerned University of Michigan alumni, students, and others who oppose the recent election of Chris Armstrong—a RADICAL HOMOSEXUAL ACTIVIST, RACIST, ELITIST, & LIAR—as the new head of student government.” (Capitals in the original.) (CNN 9/30/2010) (The blog is later restricted to invited members only.) (Andrew Shirvell 9/2010) In subsequent posts, Shirvell attacks Armstrong for allegedly engaging in “flagrant sexual promiscuity” with another male member of student government; going back on campaign promises; sexually seducing and influencing “a previously conservative [male] student” so much so that the student “morphed into a proponent of the radical homosexual agenda”; hosting a gay orgy in his dorm room in October 2009; and trying to recruit incoming first year students “to join the homosexual ‘lifestyle.’” Shirvell posts a picture of Armstrong with the word “Resign” scrawled over his face, and another with “Racist Elitist Liar” over his face; the picture includes a gay pride flag with a swastika superimposed over it and an arrow pointing to Armstrong, a clear indication that Shirvell associates Armstrong with Nazism. Shirvell also acknowledges protesting outside of Armstrong’s house and calling him “Satan’s representative on the student assembly.” Shirvell makes a number of calls to House Speaker Nancy Pelosi’s office while Armstrong works there as an intern, in what an investigation finds is “an attempt to slander Armstrong—and ultimately attempting to cause Pelosi to fire Armstrong,” according to Michigan Attorney General Mike Cox. Cox goes on to note that Shirvell has attempted to “out” Armstrong’s friends as being homosexual, even though several aren’t gay. In late September, asked about Shirvell’s six-month Internet attack against a college student, Cox says in a statement: “Mr. Shirvell’s personal opinions are his and his alone and do not reflect the views of the Michigan Department of Attorney General. But his immaturity and lack of judgment outside the office are clear.” Shirvell says his blog posts are personal and have nothing to do with his job. “I’m a Christian citizen exercising my First Amendment rights,” he tells CNN. “I have no problem with the fact that Chris is a homosexual. I have a problem with the fact that he’s advancing a radical homosexual agenda.” Asked directly if he is a bigot, Shirvell responds: “The real bigot here is Chris Armstrong. I don’t have any hate in my body at all.” Governor Jennifer Granholm (D-MI) says she would fire Shirvell if she were attorney general. Armstrong seeks a restraining order against Shirvell, who has been banned from entering the Michigan college campus, asking that Shirvell be kept from harassing him at home or other places he frequents. Campus police are investigating Shirvell for harassment and stalking. On October 1, Shirvell takes a voluntary leave of absence after the national media begins reporting his harassment of Armstrong. (Jilani 9/29/2010; CNN 9/30/2010; AnnArbor.com 10/1/2010) On his blog “Pharyngula,” biology professor P. Z. Myers of the University of Minnesota writes: “The scary part is that Armstrong is just the student body president… a position with almost no power. Shirvell is an assistant attorney general for the state of Michigan. Let’s just hope that that is the peak of his political career.” (P.Z. Myers 9/29/2010) Shirvell will be fired in November (see November 8, 2010).

Assistant state attorney Andrew Shirvell of Michigan is fired for harassing the student assembly president of the University of Michigan, Chris Armstrong. Armstrong is gay; since April, Shirvell has conducted a campaign of harassment at him over his homosexuality, veracity, and other personal attributes (see April 1 - October 1, 2010). Shirvell maintains he was merely exercising his freedom of speech. Michigan Attorney General Mike Cox fires Shirvell after the first day of a mandatory disciplinary hearing for him. Cox says that Shirvell’s firing comes after a state investigation revealed that Shirvell “repeatedly violated office policies, engaged in borderline stalking behavior, and inappropriately used state resources.” Shirvell also told a number of lies during the disciplinary hearing. Cox adds, “To be clear, I refuse to fire anyone for exercising their First Amendment rights, regardless of how popular or unpopular their positions might be.” Cox says Shirvell crossed the boundaries of free speech when he repeatedly went to Armstrong’s home to verbally abuse him, including one visit at 1:30 a.m. “That incident is especially telling because it clearly was about harassing Mr. Armstrong, not engaging in free speech,” Cox says. Armstrong says Shirvell videotaped a late-night party at his home, appeared on campus with signs calling him a “racist” and a “liar,” and repeatedly vilified him on Internet blogs. Armstrong says the state should revoke Shirvell’s law license. A statement from the attorney general’s office says, “The next step must be a complete retraction of all the malicious lies and fabrications by Mr. Shirvell, and a public apology to Mr. Armstrong, his family and others Mr. Shirvell has slandered.” Shirvell’s lawyer says his client is considering appealing the decision to fire him to the Michigan Civil Service Commission, and says Shirvell believes the decision to fire him was politically motivated. Cox says, “The cumulative effects of his use of state resources, harassing conduct that is not protected by the First Amendment, and his lies during the disciplinary conference all demonstrate adequate evidence of conduct unbecoming a state employee.” Shirvell is prohibited by a restraining order from making physical or verbal contact with Armstrong, nor is he allowed to be in the same place as the student when it’s likely Armstrong will be present. (Associated Press 11/8/2010)