This page can be viewed at http://www.historycommons.org/entity.jsp?entity=andrews_air_force_base

Andrews Air Force Base was a participant or observer in the following events:

Many aircraft at Andrews Air Force Base, which is just a few miles outside Washington, DC, are taking part in training exercises. James Ampey, an FAA air traffic controller who is currently on duty in the control tower at the base, will later recall that there are “an unusually high number of aircraft taking off and landing at Andrews [this] morning, because previously scheduled military exercises [are] underway.” (9/11 Commission 7/28/2003

) It is unclear what specific exercises these aircraft are participating in, and the exact time period Ampey is referring to.
Militarized 747 Involved in 'Global Guardian' Exercise - According to journalist and author Dan Verton, around the time of the Pentagon attack, “civilian and military officials [are] boarding a militarized version of a Boeing 747, known as the E-4B National Airborne Operations Center (NAOC), at an airfield outside of the nation’s capital. They [are] preparing to conduct a previously scheduled Defense Department exercise” (see (9:27 a.m.) September 11, 2001). (Verton 2003, pp. 143-144) This airfield is Andrews Air Force Base and the exercise being referred to is the US Strategic Command’s annual exercise, Global Guardian, for which three E-4Bs are launched (see 8:30 a.m. September 11, 2001 and Before 9:00 a.m. September 11, 2001). (Dejka 2/27/2002; Kieschnick 9/7/2012

) Whether other aircraft that are taking off or landing at Andrews are participating in Global Guardian is unknown.
NORAD Exercise, 'Vigilant Guardian' - Another major exercise taking place this morning is called Vigilant Guardian. All of the North American Aerospace Defense Command (NORAD) is participating in it (see (6:30 a.m.) September 11, 2001). (Seely 1/25/2002; Scott 6/3/2002) However, Andrews is not one of NORAD’s seven “alert” sites around the US. (McKenna 12/1999) And the 113th Wing of the District of Columbia Air National Guard, which is based at Andrews, is not part of the NORAD air defense force. (Scott 9/9/2002; Filson 2003, pp. 76) Furthermore, members of the 113th Wing have just returned from a major training exercise in Nevada (see Late August-September 8, 2001), and so, with only a few pilots and planes available, today is a “light flying day” for their unit. (9/11 Commission 3/11/2004

Andrews Air Traffic Control Tower. [Source: FAA]The Secret Service tells FAA headquarters that it wants fighter jets launched over Washington, DC, and this message is then relayed to the air traffic control tower at Andrews Air Force Base, which is 10 miles from Washington. The District of Columbia Air National Guard (DCANG) at Andrews is notified, but no jets will take off from the base until 10:38 a.m. (9/11 Commission 8/28/2003; 9/11 Commission 7/24/2004, pp. 44, 465) The request for fighter jets is apparently made by Secret Service agent Nelson Garabito, who is responsible for coordinating the president’s movements, during a phone call with his counterpart at FAA headquarters in Washington, Terry Van Steenbergen. This call began shortly after the second tower was hit at 9:03 a.m. (see Shortly After 9:03 a.m. September 11, 2001). (9/11 Commission 7/28/2003; 9/11 Commission 3/30/2004; 9/11 Commission 7/24/2004, pp. 464)
FAA Headquarters Calls Andrews Tower - According to the 9/11 Commission, “The FAA tower” at Andrews is then “contacted by personnel at FAA headquarters” who are “on an open line with senior agents from the president’s detail,” and is informed that the Secret Service wants fighters airborne. Karen Pontius at FAA headquarters tells Steve Marra, an air traffic controller at the Andrews control tower, “to launch F-16s to cap the airspace over Washington.”
Message Passed to DCANG - Marra then relays Pontius’s message to the 113th Wing of the DC Air National Guard, which is based at Andrews. (9/11 Commission 7/28/2003

) The ATIS is an automatic information system over which “[p]re-recorded airfield advisory information is automatically transmitted at timed intervals over the airways on a specific frequency.” (US Air Force 10/1/1999

)
Planes Told They Could Be 'Shot Down' - A 9/11 Commission document summarizing key transmissions from the Andrews tower will show that warning messages are broadcast about once or twice every 10 minutes. The messages, which are all quite similar, include: “No fly notice. Remain clear of Andrews Class B airspace or you will be shot down,” and, “Any aircraft monitoring Andrews Approach Control frequency: remain clear of Andrews Class B airspace or you will be shot down.” (9/11 Commission 2/17/2004) (Class B airspace is restricted airspace in which no one is supposed to fly without a working transponder and permission from an air traffic controller. The airspace around much of Washington is designated Class B airspace. (Kessler and Phillips 9/12/2001; Bumiller and Wald 9/29/2001) )
Fighter Pilots Hear Warning - At least one of the warning messages is heard by District of Columbia Air National Guard (DCANG) fighter pilots who launch from Andrews Air Force Base at 10:42 a.m. (see 10:42 a.m. September 11, 2001) and by pilots launched from Langley Air Force Base by NORAD’s Northeast Air Defense Sector (NEADS) earlier on (see (9:25 a.m.-9:30 a.m.) September 11, 2001). DCANG pilots Marc Sasseville and Heather Penney Garcia are flying at low altitude over Washington, while the three Langley pilots are above them at around 20,000 feet. Although they are on different radio frequencies, both sets of pilots hear a message over a shared channel: “Attention all aircraft monitoring Andrews tower frequency. Andrews and Class Bravo airspace is closed. No general aviation aircraft are permitted to enter Class Bravo airspace. Any infractions will be shot down.” (Filson 2003, pp. 82)
Officers Hear Warning - The warning messages are also heard by DCANG officers at Andrews. After hearing that violators of the Washington airspace will be shot down, Brigadier General David Wherley thinks to himself, “I guess that will be us doing the shooting.” (Vogel 4/8/2002; Vogel 2007, pp. 446) Apparently referring to the warnings from the Andrews tower, Lieutenant Colonel Phil Thompson will later recall: “We kind of winced at that, because there are plenty of hard reasons to not shoot somebody down. We were really in an ID posture—and trying to really be careful.” (Scott 9/9/2002)
Shootdown Not Authorized until 10:18 - Although the first of the warnings is broadcast at 10:05 a.m., President Bush only gives authorization for hostile aircraft to be shot down at 10:18 a.m., according to the 9/11 Commission, in a phone call with Vice President Dick Cheney (see 10:18 a.m.-10:20 a.m. September 11, 2001). Furthermore, NEADS only learns that NORAD has been given clearance to shoot down threatening aircraft at 10:31 a.m. (see 10:31 a.m. September 11, 2001). The 9/11 Commission document of Andrews tower transmissions will show that the warnings are broadcast until at least 11:05 a.m., although presumably they continue after that. (9/11 Commission 2/17/2004; 9/11 Commission 7/24/2004, pp. 41-42) 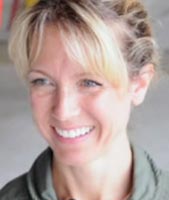 Heather Penney Garcia. [Source: Johnathon Orrell]Two F-16 fighter jets belonging to the District of Columbia Air National Guard (DCANG) take off from Andrews Air Force Base, near Washington, but they have no missiles and only training bullets for their guns. The pilots are Lieutenant Colonel Marc Sasseville and Lieutenant Heather Penney Garcia. (Filson 2003, pp. 82; 9/11 Commission 2004; Vogel 2007, pp. 446)
Possibly Given Shootdown Authorization - Before they headed to their jets, Sasseville and Penney Garcia were given a short briefing by Brigadier General David Wherley, the commander of the DC Air National Guard. Wherley will later recall telling Sasseville that he has “weapons free flight-lead control,” meaning he is responsible for deciding whether to fire on hostile aircraft (see (Between 9:40 a.m. and 10:35 a.m.) September 11, 2001). (Filson 2003, pp. 82; 9/11 Commission 7/24/2004, pp. 44; Vogel 2007, pp. 446) But Sasseville will say he does not recall receiving any such rules of engagement until after he has taken off. (9/11 Commission 3/8/2004

)
Jets Only Have Training Ammunition - The two pilots run out to their jets and climb into the cockpits. But their F-16s are armed only with “hot” guns and 511 rounds of non-explosive training practice (TP) ammunition. According to Sasseville: “They had two airplanes ready to go, and were putting missiles on numbers three and four. Maintenance wanted us to take the ones with missiles, but we didn’t have time to wait on those.”
Rookie Pilot 'Never Scrambled Before' - Penney Garcia, who is a rookie pilot, will later say: “I’d never scrambled before, I’d never done this. I was screaming to the maintainers to pull the chocks, and the guys were pulling the pins to arm the guns. We were going without INS [inertial navigation system].” Sasseville and Penney Garcia are airborne about six minutes after reaching their jets. They are unaware that fighters launched from Langley Air Force Base are also flying over Washington, at around 20,000 feet (see (Between 9:49 a.m. and 11:00 a.m.) September 11, 2001). (Scott 9/9/2002; Filson 2003, pp. 82)
Told to Look for Hijacked Plane - Over their radios, Sasseville and Penney Garcia receive instructions from their squadron to look for a hijacked aircraft approaching from the northwest and heading toward Georgetown (see (10:30 a.m.-10:40 a.m.) September 11, 2001). But, Sasseville will later recall, “We didn’t know what we were looking for—how high he was coming, or low, or where he was going.” (Vogel 2007, pp. 446) He will say, “I don’t have the whole picture, but have word from Washington National Approach that something is coming.”
Pilot 'Making Things Up on the Fly' - The two jets will fly over Washington at low altitudes, around 5,000 or 6,000 feet. Sasseville will later say, “I didn’t want to get too low for a good radar angle, and not too high, so we could get somewhere fast.” He will admit that he is “making things up on the fly,” as he has no precedent to draw upon. (Scott 9/9/2002; Filson 2003, pp. 82) Another DCANG pilot, Billy Hutchison, launched from Andrews four minutes before Sasseville and Penney Garcia take off, but he is airborne for less than 10 minutes (see (10:38 a.m.) September 11, 2001 and 10:47 a.m. September 11, 2001). The next DCANG jets to take off, which will be armed with missiles, launch at 11:11 a.m. (see 11:11 a.m. September 11, 2001). (9/11 Commission 2004; 9/11 Commission 2/17/2004; Vogel 2007, pp. 446)