This page can be viewed at http://www.historycommons.org/entity.jsp?entity=anne_garside_1

Anne Garside was a participant or observer in the following events: 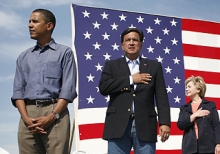 Presidential candidates Barack Obama (left), Tom Harkin, and Hillary Clinton stand for the singing of the National Anthem. [Source: Time]A chain email circulating around the Internet falsely claims Senator Barack Obama (D-IL), campaigning for president, “refused” to say the Pledge of Allegiance during an event and failed to put his hand over his heart. A photograph with the email shows Obama standing in front of an American flag with his hands clasped just below his waist. Fellow presidential contenders Hillary Clinton (D-NY) and Bill Richardson (D-NM) stand beside him with their hands over their hearts. The email, noting Obama’s middle name is Hussein, claims Obama “REFUSED TO NOT ONLY PUT HIS HAND ON HIS HEART DURING THE PLEDGE OF ALLEGIANCE, BUT REFUSED TO SAY THE PLEDGE… how in the hell can a man like this expect to be our next Commander-in-Chief????” The photograph was not taken during the saying of the pledge, but during the singing of the “Star-Spangled Banner.” It was taken on September 16, 2007 in Indianola, Iowa, at the Harkin Steak Fry, an annual political event hosted by Senator Tom Harkin (D-IA). The photo was printed in Time magazine; the caption said Obama and the others “stand during the national anthem.” Matt Paul, who helped organize the event, confirms that the photo was taken as someone sang the national anthem. Additionally, an ABC News video of the event confirms the photo was taken during the anthem. The email claims that “the article said” Obama refused to say the pledge and would not put his hand on his heart, but the article said nothing of the sort. PolitiFact, the nonpartisan, political fact-checking organization sponsored by the St. Petersburg Times, attempts to find another article making the same claim, but only finds blog postings repeating the email’s original assertion. Obama has said the email is false, and that he was singing during the anthem, a claim verified by the ABC video. “My grandfather taught me how to say the Pledge of Allegiance when I was two,” Obama recently said on another campaign stop in Iowa. “During the Pledge of Allegiance you put your hand over your heart. During the national anthem you sing.” He called the email “irritating” and likened it to others that have falsely said he is a Muslim (see October 1, 2007, December 19, 2007, and January 11, 2008). The Obama campaign has received strong support from a number of retired military leaders. “Senator Obama’s attackers are peddling lies and smears because they disagree with his strong opposition to the war in Iraq and the rush to war in Iran,” writes former Secretary of the Navy Richard Danzig, in a letter cosigned by retired General Merrill “Tony” McPeak and General J. Scott Gration. “We have served this nation for decades and we know a true patriot when we see one. Barack Obama is a patriot.” Some conservative bloggers have noted their belief that federal law for “patriotic and national observances” says that during the Star-Spangled Banner, “all present except those in uniform should stand at attention facing the flag with the right hand over the heart; men not in uniform should remove their headdress with their right hand and hold the headdress at the left shoulder, the hand being over the heart.” The citation is not a formal law, and experts say it is somewhat obsolete, though it is still cited in some military manuals. Modern custom does not require a hand over the heart, says Anne Garside, director of communication for the Maryland Historical Society, home of the original manuscript of the Star-Spangled Banner. “I think the bottom line is that you show respect with your demeanor,” she says. “Whether you put your hand over your heart, hold your hat at shoulder level or waist level, is really in this day and age irrelevant.” (Time 9/16/2007; ABC News 11/7/2007; St. Petersburg Times 11/8/2007)