This page can be viewed at http://www.historycommons.org/entity.jsp?entity=ansaldo_energia

Ansaldo Energia was a participant or observer in the following events:

Apparently, this is news video of Mohammed Haydar Zammar taken shortly after 9/11. [Source: UE-TV]An investigation of al-Qaeda contacts in Hamburg by the Office for the Protection of the Constitution (BfV), Germany’s domestic intelligence service, begins at least by this time (Germany refuses to disclose additional details). The investigation is called Operation Zartheit (Operation Tenderness), and it was started by a tip about Mohammed Haydar Zammar from Turkish intelligence (see 1996). (New York Times 1/18/2003)
Zammar Linked to Hamburg 9/11 Cell and Bin Laden - It is later believed that Zammar, a German of Syrian origin, is a part of the Hamburg al-Qaeda cell. (Rotella 1/14/2003) Zammar will later claim that he recruited 9/11 hijacker Mohamed Atta and others into the cell. (Washington Post 6/12/2002) German intelligence is aware that he was personally invited to Afghanistan by bin Laden. (Schrom and Laabs 2/2/2003) The investigation into Zammar allegedly stops in early 2000, after investigators conclude they don’t have enough evidence to convict him of any crime. (Stark 11/21/2005)
CIA Involved with Zammar Operation - Vanity Fair will later claim that “A lone CIA agent, the Germans disclose, attempted to work alongside them” in Operation Zartheit, but German “requests for greater information and cooperation from the CIA, they claim, came to naught.” (Zeman et al. 11/2004) This CIA agent is probably Thomas Volz, who is the CIA’s undercover agent in Hamburg at the time (see December 1999).

November 1997: Enron and Bin Laden Family Team Up for Project

Industry newsletter reports that Saudi Arabia has abandoned plans for open bids on a $2 billion power plant near Mecca, deciding that the government will build it instead. Interestingly, one of the bids was made by a consortium of Enron, the Saudi Binladin Group (run by Osama’s family), and Italy’s Ansaldo Energia. (Alexander's Gas & Oil Connections 1/22/1998) 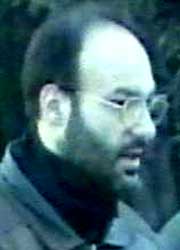 Mamoun Darkazanli. [Source: Interpol]The CIA begins “persistent” efforts to recruit German businessman Mamoun Darkazanli as an informant. Darkazanli knows 9/11 hijacker Mohamed Atta and the other members of the Hamburg al-Qaeda cell. US and German intelligence had previously opened investigations into Darkazanli in September 1998. Agents occasionally followed him, but Darkazanli obviously noticed the tail on him at least once. More costly and time-consuming electronic surveillance is not done however, and by the end of 1999, the investigation has produced little of value. German law does not allow foreign governments to have informants in Germany. So this month, Thomas Volz appears at the headquarters of the Hamburg state domestic intelligence agency, the LfV, responsible for tracking terrorists and domestic extremists. (Crewdson 11/17/2002; Laabs 8/13/2003) Volz’s business card identifies him as “consul of the United States of America” at the US consulate general in Hamburg, but he actually is an undercover CIA agent. (Cziesche et al. 12/12/2005) Volz tells them the CIA believes Darkazanli has knowledge of an unspecified terrorist plot and encourages that he be “turned” against his al-Qaeda comrades. A source later recalls he says, “Darkazanli knows a lot.” Efforts to recruit him will continue in the spring next year. The CIA has not admitted this interest in Darkazanli. (Crewdson 11/17/2002; Laabs 8/13/2003)

German investigators finally agree to the CIA’s request to recruit businessman Mamoun Darkazanli as an informant. An agent of the LfV, the Hamburg state intelligence agency, casually approaches Darkazanli and asks him whether he is interested in becoming a spy. Darkazanli replies that he is just a businessman who knows nothing about al-Qaeda or terrorism. The Germans inform the local CIA representative that the approach failed. The CIA agent persists, asking the German agent to continue to try. However, when German agents ask for more information to show Darkazanli they know of his terrorist ties, the CIA fails to give them any information. As it happens, at the end of January 2000, Darkazanli had just met with Barakat Yarkas in Madrid, Spain. (Crewdson 11/17/2002) Darkazanli is a longtime friend and business partner of Yarkas, the most prominent al-Qaeda agent in Spain. Yarkas has long been under surveillance by Spanish intelligence, and they have been sharing that intelligence with the CIA (see August 1998-September 11, 2001). (Rotella 1/14/2003) The meeting included other suspected al-Qaeda figures, and it was monitored by Spanish police. If the CIA is aware of the Madrid meeting, they do not tell the Germans. (Crewdson 11/17/2002) A second LfV attempt to recruit Darkazanli also fails. The CIA then attempts to work with federal German intelligence officials in Berlin to “turn” Darkazanli. Results of that effort are not known. (Crewdson 11/17/2002)