This page can be viewed at http://www.historycommons.org/entity.jsp?entity=aras_habib

Positions that Aras Habib has held:

Aras Habib was a participant or observer in the following events: 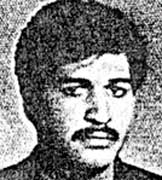 Iraqi defector “Curveball.” [Source: ABC News]“Curveball,” an Iraqi in his late 20s later identified as Rafid Ahmed Alwan (see November 4, 2007), travels to Germany on a tourist visa and applies for political asylum, telling German immigration officials that he embezzled money from the Iraqi government and fears prison or worse if he returns home. The Germans send him to Zirndorf, a refugee center near Nuremberg, where other Iraqi exiles seeking German visas are being held. There, he changes his story, telling German intelligence (BND) officers that he was a chemical engineer (see 1994) who had been promoted to direct a secret mobile biological weapons plant at Djerf al Nadaf, just outside of Baghdad. The plant masqueraded as a “seed purification plant,” he claims. Curveball tells the Germans that in Iraq, he designed laboratory equipment to convert trucks into biological weapons laboratories. He offers the names of six sites where Iraq might be hiding them, three of which, he says, are already in operation. He also says that a farm program to boost crop yields is a front for Hussein’s new biological weapons production program. He tells the Germans of a warehouse at the plant that housed trucks; the trucks had been equipped to create and transport biological weapons. His story dovetails with the long-held fears by Western intelligence agencies that Saddam Hussein was cooking up biological and chemical weapons; the Germans stash him away, nickname him “Curveball,” and interrogate him every few days for the next eighteen months (see January 2000-September 2001). Curveball refuses to meet with Americans; therefore, only summaries of his debriefings will be sent to Washington. CIA analysts will be mesmerized by Alwan’s information. Former senior CIA official Tyler Drumheller recalls in late 2007, “Curveball was the one piece of evidence where they could say, ‘Look at this. If they have this capability, where they can transport biological weapons, anthrax, all these horrible weapons, they can attack our troops with them. They can give them to terrorist groups.’” Most arresting is Curveball’s story that in 1998 he saw an accidental release of a biological weapon that killed 12 people. His story is almost entirely false. (Drogin and Goetz 11/20/2005; CBS News 11/4/2007) Vincent Cannistraro, former head of the CIA’s Counter Terrorism Center, will tell the New Yorker in 2004 that the CIA believes that Aras Habib, the INC intelligence chief later accused of providing US intelligence to Iran, played a part in Curveball’s going to Germany. “The CIA is positive of it,” he says. (Mayer 6/7/2004)

Bob Drogin, author of the 2007 book Curveball: Spies, Lies and the Con Man Who Caused a War, will write that Curveball gives the Germans detailed diagrams of germ-making equipment, fermenters, mixing vats, controllers, and other items, which appear “plausible,” even though they can’t be reverse-engineered to “brew anthrax” or “build a bio-lab in a garage.” Instead, he will write, Curveball’s inconsistent information will be “interpreted, summarized, reformatted and analyzed at every stage,” but will never be verified. Drogin will call the entire affair “the dark side of intelligence,” and will write that, to the CIA’s top officials, the risk of going so far on uncorroborated evidence would take care of itself once US forces found the fabled Iraqi WMDs. Once the weapons were in hand, Drogin will write, they will figure “no one would remember a bogus defector.” As a CIA supervisor will later e-mail to a frustrated agency whistleblower, “Let’s keep in mind the fact that this war’s going to happen regardless of what Curveball said or didn’t say, and that the Powers That Be probably aren’t terribly interested in whether Curveball knows what he’s talking about.” (Roane 10/21/2007)