This page can be viewed at http://www.historycommons.org/entity.jsp?entity=army_rangers

Army Rangers was a participant or observer in the following events:

October 20, 2001: US Special Forces Little Used in Afghanistan for Fear of Casualties 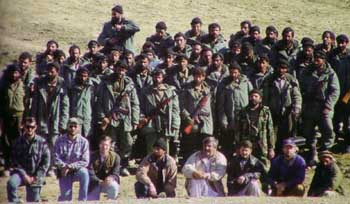 US Special Forces in the foreground with their Afghan allies in the rear. The allies are wearing US-issued parkas. [Source: Robin Moore]US special forces conduct their first two significant raids in the Afghanistan war on this day. In the first, more than a hundred Army Rangers parachute into a supposedly Taliban-controlled airbase near Kandahar. But in fact, the airbase had already been cleared by other forces, and the raid apparently is staged for propaganda purposes. Footage of the raid is shown that evening on US television. In the other raid, a combination of Rangers and Delta Force attack a house outside Kandahar occasionally used by Taliban leader Mullah Omar. This raid is publicly pronounced a success, but privately the military deems it a near-disaster. Twelve US soldiers are wounded in an ambush as they leave the compound, and neither Mullah Omar nor any significant intelligence is found at the house. Prior to these raids, top military leaders were already reluctant to use special forces for fear of casualties, but after the raids, the military is said to be even more reluctant. (Hersh 11/5/2001) Author James Risen will later note that Gen. Tommy Franks was “under intense pressure from [Defense Secretary] Rumsfeld to limit the number of US troops being deployed to the country.” (Risen 2006, pp. 185) Only around three-dozen US special forces will take part in the pivotal battle for Tora Bora (see December 5-17, 2001). Counterterrorism “tsar” Richard Clarke will later blame the failure to capture bin Laden during the war to “the abject fear of American casualties. It’s something that cuts across both [the Clinton and Bush] administrations.” (Scheuer 6/20/2006)

New Army enlistees Pat and Kevin Tillman (see May 23-June 1, 2002), both former pro athletes, undergo the Army’s three-week “Ranger Indoctrination Program.” They then attend Ranger School at Fort Benning, Georgia, and are finally posted to Fort Lewis, Washington as members of the Second Battalion in the 75th Ranger Regiment, serving in the same unit. (Fish 4/2006)