This page can be viewed at http://www.historycommons.org/entity.jsp?entity=atif_bin_mansour

Atif bin Mansour was a participant or observer in the following events: 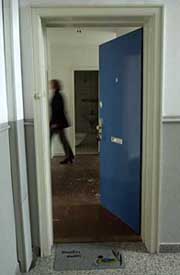 A view inside Atta’s Marienstrasse flat. [Source: DPA]Hijacker Marwan Alshehhi moved to Bonn, Germany in 1996, and studied German there. He then lived in Hamburg for several months in 1998, and returned to Bonn after failing a language exam. Just as he leaves town, a Pakistani student named Atif bin Mansour arrives in Hamburg, and begins living and studying together with Mohamed Atta. Early in 1999, Mansour applies with Atta for a room to hold a new Islamic study group. Mansour is a pilot on leave from the Pakistani Air Force. As the Los Angeles Times puts it, “This in itself is intriguing—a Pakistani pilot? Investigators acknowledge they haven’t figured out Mansour’s role in the plot, if any.” On this day, Mansour’s brother, also in the Pakistani armed forces, is killed (along with 15 other officers) when his surveillance plane is shot down by India. Mansour returns home and was detained and stopped from returning to Germany. Soon afterwards, Alshehhi returns to Hamburg. According to Mansoor’s father, “Atif was detained because he had not sought permission from the authorities before returning home to attend his younger brother’s funeral.” Then he is set free with assistance from a relative and works on Pakistani air force base. Contacted on his mobile phone by a reporter, Mansour says, “I won’t be able to speak further on such a sensitive issue.” (Mir 7/17/2002; McDermott 9/1/2002; Finn 9/11/2002) In March 2001, Mohamed Atta applies together with a Pakistani Air Force pilot for a security job with Lufthansa Airlines (see February 15, 2001). This pilot is a member of the same Islamic study group as Mansour, but it’s not clear if this is Mansour and he did come back to or stay in Germany, or if Atta was associating with a second Pakistani Air Force pilot. (Roth 2001, pp. 9f; Moore 1/24/2002) The FBI later notes that Alshehhi arrived “almost as a replacement” for Mansour. After 9/11, the FBI asks Pakistan if the flight lieutenant and squad leader Mansour can be found and questioned about any possible role he may have had in the 9/11 plot, but there’s no indication Pakistan as to whether has ever agreed to this request. (Mir 7/17/2002) In late 2002, the German Federal Bureau of Criminal Investigations will say that Mansour remains “a very interesting figure.” (McDermott 9/1/2002)

According to a book by Jurgen Roth, described by Newsday as “one of Germany’s top investigative reporters,” on this day 9/11 hijacker Mohamed Atta applies for a job with Lufthansa Airlines at the Frankfurt, Germany, airport. The security post he applies for would give him access to secure areas of the busy international airport. However, when Lufthansa checks his criminal record they find that in 1995 he had been under investigation for petty drug crimes (see 1995), so his application is turned down. Three days later, an Iranian citizen dropping Atta’s name also applies for the same job, and is also turned down. On March 5, a third man applies, with Atta at his side. He tells Lufthansa that he has been a pilot in the Pakistani Air Force. Apparently both the Iranian and Pakistani are members of an Islamic study group with Atta at the Hamburg university they are all attending. While the name of the Pakistani pilot is not revealed in this account, a Pakistani Air Force pilot named Atif bin Mansour is known to have applied together with Atta for a room for a new Islamic study group in early 1999 (see Late 1998-August 10, 1999). After 9/11, Lufthansa Airlines will say they can neither confirm nor deny this account, because all such records for rejected applicants have been routinely deleted. (Roth 2001, pp. 9f; Moore 1/24/2002) In 2007, it will be reported that French intelligence learned before 9/11 of a meeting in early 2000 in which al-Qaeda planned the hijacking of an airliner departing from Frankfurt, and one of the target airliners considered was Lufthansa (see Early 2000).