This page can be viewed at http://www.historycommons.org/entity.jsp?entity=bank_of_america_tower__tampa__1

Bank of America Tower (Tampa) was a participant or observer in the following events: 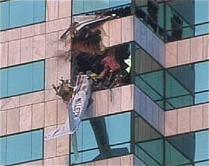 Plane’s tail hangs from the Bank of America building in Tampa, Florida. [Source: Anomalies-Unlimited]Fifteen-year-old Charles J. Bishop, a high school student from Tarpon Springs, Florida, steals a small aircraft. As soon as the plane takes off, the air traffic controllers alert the United States Coast Guard and MacDill Air Force Base. Despite repeated warnings from a helicopter dispatched by the Coast Guard, the small plane continues on until it collides with an office building. The plane crashes between the 23rd and 24th floors of the 42-story Bank of America Tower in Tampa at 5:00 p.m. Before the incident, he is authorized to do a pre-flight check but not to get in an aircraft alone.
Investigation - After the crash, investigators discover that the teen had a troubled past. Officials rule out terrorism although eye witnesses say that the plane makes no apparent attempt to avoid hitting the building. Officials finally suggest that the crash is an apparent suicide. In addition, a note found in the wreckage states that he voices support for Osama bin Laden. However, there is no evidence that the teen has any connection with any terror group. Later authorities confiscate a computer from Bishop’s parents’ house to figure out what motive is involved in the incident. Moments after the incident, President George W. Bush is briefly informed about the incident and two unrelated crashes that same day. In April 2002, transcripts obtained from the Federal Aviation Administration (FAA) reveal new details about the incident, which include how close the small plane came to a Southwest Airlines flight.
Other Consequences - Bishop’s mother files a $70 million dollar lawsuit against Roche Laboratories, who makes an acne medicine called Accutane. According to the lawsuit claim the medicine has side effects such as depression and suicidal actions, which the claim states was the cause of the incident. Also, numerous security measures are taken in response to the incident. The FAA releases a security notice on January 6, the day after the incident. The notice includes security and regulations pertaining to underaged flight students. In addition, the FAA and other similar aircraft organizations propose more security of flight schools and small aircraft. While authorities state that the crash is due to an “abuse of trust” rather than a security breach, others argue for the need of increased security due to the simplicity of such actions. (Anomalies-Unlimited 7/28/2006)