This page can be viewed at http://www.historycommons.org/entity.jsp?entity=ben_venzke_1

Ben Venzke was a participant or observer in the following events: 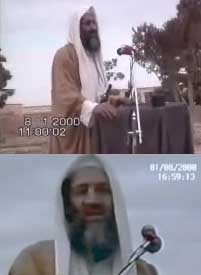 The above still is from the bin Laden speech footage released in late 2006, and the below still is from the film The Road to Guantanamo released in early 2006. The date stamps are 1/8/2000 and 8/1/2000. In the film it is speculated the speech could have been from January or August 2000. [Source: London Times / Sony Pictures]A new videotape showing bin Laden, Mohamed Atta, and Ziad Jarrah in Afghanistan before 9/11 is leaked to the media. NBC reports that the US military obtained the tape at an al-Qaeda compound in Afghanistan in late 2001. NBC filed a freedom of information act request for the video earlier in 2006, but still had not gotten copies when the London Times somehow got a copy and released it. (MSNBC 9/30/2006) The Times will only say the video was passed to them “through a previously tested channel. On condition of anonymity, sources from both al-Qaeda and the United States have confirmed its authenticity.” There is no sound, and the Times claims that “lip-readers have failed to decipher it, according to a US source.” One part of the tape shows bin Laden addressing a crowd of about 100 followers on January 8, 2000. Another part of the tape shows Atta and Jarrah together at an Afghanistan training camp on January 18, 2000, apparently while they read their wills. (Fouda 10/1/2006) Ben Venzke, head of a group monitoring terrorism communications called the IntelCentre, says, “It is highly unlikely that al-Qaeda wanted the material to be released in this manner and it is not consistent with any previous release.” He notes that bin Laden previously said he was saving Atta’s last will for a special occasion. This release could have spoiled those plans. Dia Rashwan, an Egyptian expert on militant groups, finds it strange the cameraman focuses on bin Laden’s audience instead of on bin Laden, clearly identifying many of the people in the crowd. “Was this a video by al-Qaeda or by a security agency? I have never seen such a video.” (Associated Press 10/3/2006) Further, it is noted on the Internet that footage of bin Laden’s speech is remarkably similar to footage of a bin Laden speech in The Road to Guantanamo, a docu-drama released in March 2006. While the film is mostly made up of reenactments, it is based on the real cases of several Guantanamo prisoners and shows one of them being asked to identify himself in the speech footage in 2003.