This page can be viewed at http://www.historycommons.org/entity.jsp?entity=bernard_t__stasulli_1

Bernard T. Stasulli was a participant or observer in the following events: 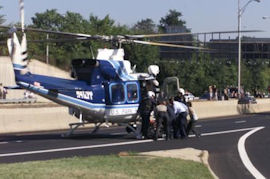 A US Park Police helicopter on the road outside the Pentagon. [Source: Michael Garcia]The US Park Police Aviation Unit becomes one of the first agencies to respond to the attack on the Pentagon, with its two helicopters arriving on the scene within minutes of the crash. (Goldberg et al. 2007, pp. 161-162) The aviation unit is located in Anacostia Park in southeast Washington, DC, across the Potomac River from the Pentagon. It has two Bell 412 helicopters—a modern version of the “Huey”—that are prepared for virtually any emergency. They are equipped with mass casualty kits, which allow them to carry up to four critically injured patients, along with a large amount of additional medical and rescue apparatus, and other sophisticated equipment. (Wagstaff 10/1/2001; Forror 11/2001; Forror 2/2002; National Park Service 10/16/2004; Hawley 10/25/2007) The unit had been running a large training event (see 8:30 a.m. September 11, 2001) when personnel there learned of the first crash in New York from television reports. After seeing the second plane hitting the World Trade Center live, they realized this was a deliberate act. Sergeant Ronald Galey, one of the unit’s helicopter pilots, will later recall that at that point, “[W]e just started talking, ‘Hey, we’d better get ready.’”
Personnel Hear Explosion from Pentagon - Personnel at the aviation unit hear the explosion when the Pentagon is attacked at 9:37 a.m. Galey and Sergeant Kenneth Burchell, another of the unit’s helicopter pilots, hear a loud thud and then look up to see a column of smoke rising from the vicinity of the Pentagon. Galey will recall, “We all knew” this was another terrorist attack. He will add, “[W]e’ve all been expecting something like this, for an attack of some sort.” However, Galey does not initially realize the smoke rising up in the distance is coming from the Pentagon. He will say he only “suspected it was some military installation over there.” (Bohn 11/19/2001; Galey 11/20/2001; McDonnell 2004, pp. 19-20

)
Controller Reports Crash, but Accounts Conflict - Soon, the “aircraft crash phone” in the aviation unit office rings, setting off a distinctive horn alarm. This phone is a direct communications line from the control tower at Washington’s Reagan National Airport, which enables the aviation unit to respond quickly to incidents at the airport. Galey answers the call. (McDonnell 2004, pp. 20

; Goldberg et al. 2007, pp. 161-162) On the other end of the line is air traffic controller David Walsh (see (9:38 a.m.) September 11, 2001). According to author Lynn Spencer, Walsh yells down the phone: “Aircraft down at the Pentagon! Aircraft down at the Pentagon!” (Federal Aviation Administration 9/18/2001; Spencer 2008, pp. 158-159) Galey will give a similar account in a January 2002 interview, recalling that Walsh tells him that “they had a 757 go into the Pentagon and they needed us to respond to the incident.” (Galey 1/17/2002) But in November 2001, Galey will recall that Walsh says, “We have a 757 down somewhere in the vicinity of the 14th Street Bridge”—a bridge over the Potomac River, near the Pentagon. (Forror 11/2001) Later that month, Galey will state that Walsh says the tower has “lost a 757 somewhere in the vicinity of the Pentagon.” (Galey 11/20/2001)
Controller Reports Crash at Airport, according to Some Accounts - However, on another occasion Galey will say that Walsh tells him, “[W]e have a 757 down on the north end of the airport.” (Line 9/21/2002) And Sergeant Keith Bohn, another of the Park Police helicopter pilots, will give a similar account, recalling that in the initial phone call the aviation unit receives about the attack, it is informed that there is “an aircraft down at the end of the runway at National Airport.” Bohn will say he only learns the correct location of the crash while he is starting up his helicopter to respond, at which time he talks with someone in the unit’s other helicopter, and “they told me, in disbelief, that the aircraft had in fact hit the Pentagon.” (Bohn 11/19/2001)
Helicopters Reach Pentagon Minutes after Attack - The crew of one of the unit’s helicopters, which has the call sign “Eagle I,” comprises Galey as pilot, rescue technician Sergeant John Marsh, and rescue team officer John Dillon. The crew of the other helicopter, “Eagle II,” comprises pilots Burchell and Bohn, aviation unit commander Lieutenant Philip Cholak and assistant commander Sergeant Bernard Stasulli, and two Defense Department medics, Keith Kettell and Jason Kepp. (US Congress. House 9/11/2002; Line 9/21/2002; McDonnell 2004, pp. 20

) Furthermore, according to Galey, Eagle II is in fact the first of the helicopters to launch, while Eagle I, in which he flies, takes off right after it. (Galey 11/20/2001) The two helicopters arrive at the Pentagon within six minutes of the attack there, according to Rotor and Wing magazine. (Forror 11/2001; Forror 2/2002) They are the first helicopters to arrive at the scene of the crash. (NBC 4 9/11/2003)
One Helicopter Lands, Other Circles Overhead - Eagle I remains airborne, circling overhead and assuming command and control of the airspace. Eagle II lands on a paved roadway 150 to 200 yards from the crash site, according to the National Park Service’s account of 9/11, and then some of its crew members grab their emergency medical equipment and run toward the building. After a time, Bohn moves the helicopter closer to the Pentagon. (Galey 11/20/2001; McDonnell 2004, pp. 20-21

) According to Bohn’s recollections, Eagle II initially lands in “the grass area of the cloverleaf” of Route 27 and Columbia Pike. But after “maybe 10 minutes,” Bohn takes off and moves the helicopter to the road by the Pentagon helipad. (Bohn 11/19/2001)
Helicopter Takes Off with Two Patients - The triage officer at the Pentagon indicates that there are 11 individuals requiring medical evacuation, but eventually only two severely burned patients are carried onto Eagle II. Minutes after landing outside the Pentagon, the helicopter takes off and flies the patients to the Washington Hospital Center. (USU Medicine 12/2002

) While most accounts describe Park Police helicopters only taking off in the minutes after the attack on the Pentagon, Navy historian John Darrell Sherwood will later say that at least one of the aviation unit’s helicopters took off before the Pentagon was hit, and it was directed to intercept the aircraft approaching the Pentagon (see Shortly Before 9:35 a.m. September 11, 2001). And several witnesses will report seeing a helicopter near the Pentagon just before the attack there (see (9:35 a.m.-9:36 a.m.) September 11, 2001). (Parsons 12/13/2001; Washington Post 9/5/2002; Goldberg et al. 2007, pp. 258)