This page can be viewed at http://www.historycommons.org/entity.jsp?entity=bruce_barket_1

Bruce Barket was a participant or observer in the following events:

June 5, 2002 and After: Accused Anti-Abortion Murderer Extradited to US

Accused murderer James Kopp, an anti-abortion advocate who allegedly shot Dr. Barnett Slepian (see October 23, 1998), is extradited by French authorities (see March 29, 2001) to the US after the American government assures them that Kopp will not face the death penalty. French law precludes suspects being extradited to foreign nations if the possibility exists that they will be executed. Kopp retains lawyer Paul Cambria to defend him, but also retains lawyer Bruce Barket because Barket, like Kopp, has strong anti-abortion views and wants to make the defense about abortion (Cambria wants to defend Kopp strictly on the evidence). Barket will not be allowed to represent Kopp in federal court. (National Abortion Federation 2010) Months later, Kopp will confess to the murder (see November 21, 2002). He will be found guilty several months later (see March 17-18, 2003).

Anti-abortion advocate James Kopp, accused of murdering Dr. Barnett Slepian (see October 23, 1998), confesses to the crime during an interview with the Buffalo News. “I did it, and I’m admitting it,” he says. “But I never, ever intended for Dr. Slepian to die.… I regret that he died. I aimed at his shoulder.” Kopp, who for months has vehemently denied any involvement in Slepian’s death, is accompanied by his lawyer, Bruce Barket. Both Kopp and Barket intend to make their legal defense about abortion, and will attempt to claim moral justification for the murder due to Kopp’s anti-abortion views. Of other abortion providers, Kopp says: “They’re still in danger, absolutely. I’m not the first, and I probably won’t be the last.… To pick up a gun and aim it at another human being, and to fire, it’s not a human thing to do. It’s not nice. It’s not pleasant. It’s gory, it’s bloody. It overcomes every human instinct. The only thing that would be worse, to me, would be to do nothing, and to allow abortions to continue.” Kopp claims he wants to set the record straight for the sake of his supporters who were publicly proclaiming his innocence and saying the FBI had framed him. Kopp adds that he selected Slepian’s name from the phone book, and that he also cased the homes of several other physicians before deciding that Slepian’s was the most vulnerable due to a window in the back that faced the woods. After his confession, prosecutors charge Kopp with an additional charge of reckless murder with depraved indifference to human life. (Dobbin 11/21/2002; Esmonde 11/22/2002; National Abortion Federation 2010)
Ends Claims that Kopp Innocent, Framed by Police - In January 2003, the magazine Catholic Insight will observe: “With this admission, Kopp knocked the feet out from under those pro-life supporters who had suggested that he couldn’t have committed the crime because he was a pacifist, had poor eyesight, was a poor marksman, or was being framed by the police. Pro-life advocates who earlier had condemned the shootings as unacceptable acts of violence could take solace in the fact that Kopp made it clear he acted alone in the Slepian shooting and that no one in the Buffalo pro-life community had suggested Slepian as a target.” (Catholic Insight 1/1/2003)
Anti-Abortion Advocates Condemn Kopp's Shooting but Welcome Trial as Platform for Debating Abortion - The Reverend Paul Schenck, an anti-abortion advocate who has led numerous protests and has been arrested for blockading abortion clinics, says of Kopp: “James Kopp has admitted to being a cold-blooded killer, a vigilante who acted as judge, jury, and executioner. In what he did, he undermined the whole moral philosophy of the pro-life movement, which views every human life as intrinsically valuable and created in God’s image. He should fade into ignimony after being utterly rejected by all people of conscience. May God have mercy on his soul.” (Schenck 11/21/2002) Bishop Henry Mansell, a local anti-abortion leader, says while he disapproves of Kopp’s action and the use of violence against abortion providers, he welcomes the use of Kopp’s trial to create a platform for an abortion debate. “We don’t believe the end justifies the means,” Mansell says. “But given a trial, I hope there would be a discussion and an exploration of the issues in depth.” Pro-choice lawyer Glenn Murray disagrees, saying, “I would hate to think that those who want a referendum on abortion would exploit an act of terrorism.” (Esmonde 11/22/2002) “Kopp is an extremist, a terrorist, a self-confessed murderer plain and simple, so his jailhouse confession is nothing more than a cynical attempt to manipulate us all through the media,” says Gloria Feldt, president of Planned Parenthood, a pro-choice organization. The Reverend Philip “Flip” Benham, director of the anti-abortion organization Operation Save America (formerly Operation Rescue), says Kopp “betrayed the pro-life movement, unborn children, and the Lord he proclaims to serve. You never overcome the problem of murder by murdering people.” (Dobbin 11/21/2002)
Kopp Will Be Found Guilty - Kopp will be found guilty of Slepian’s murder (see March 17-18, 2003). 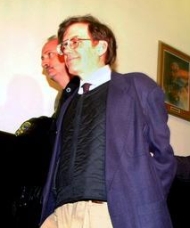 A handcuffed James Kopp is escorted into an Erie County courtroom to face trial for murdering Dr. Barnett Slepian. [Source: Getty Images]James Kopp, the anti-abortion advocate who has confessed to murdering abortion provider Dr. Barnett Slepian (see October 23, 1998 and November 21, 2002), is tried for the murder. Kopp has agreed to a bench trial in lieu of a jury; both the defense and prosecution have already agreed to a number of basic facts stipulated about the case. Defense attorney Bruce Barket argues that Kopp should be acquitted because of his moral belief that force is necessary to stop abortions, and because he did not intend to kill Slepian, but only wound him. Prosecutor Joseph Marusak counters by arguing that every step Kopp took in planning for the attack, including his choice of weapon and the use of aliases in buying the rifle, pointed to an intention to kill. After less than two days of trial, Judge Michael D’Amico finds Kopp guilty of second-degree murder. Kopp will be sentenced to 25 years to life in prison. (Thompson 3/18/2003; National Abortion Federation 2010) Kopp is allowed to read a long statement explicating his anti-abortion views into the court record. (Buffalo News 1/7/2007) Pro-choice organization Planned Parenthood says of Kopp’s conviction: “The conviction of confessed terrorist and murderer James Kopp is a triumph for justice. Our thoughts are with Dr. Slepian’s family and community. James Kopp’s horrendous crime is a painful reminder of the threat posed by extremists who will go to any lengths to impose their ideology on others. Planned Parenthood and America’s pro-choice majority will not tolerate anti-choice terrorists and their limitless hostility toward reproductive health care providers and the women they bravely serve. We hope the outcome of the Kopp trial will dissuade other anti-choice extremists from further harassment and violence. Planned Parenthood is committed to protecting our patients, staff, and volunteers and to ensuring that those who threaten them are brought to justice.” (Planned Parenthood 3/18/2003) The National Abortion Federation’s Vicki Saporta says in a statement: “Unfortunately, there are many anti-choice extremists who believe that it is justifiable to kill doctors because they provide women with safe and legal abortion care. The Army of God, of which Kopp is a member (see 1982), supports the use of force to end abortion. [V]iolence against abortion providers is never acceptable or justified.… One trend we have documented is that when one murderer is brought to justice another one is quickly recruited to become the next assassin. Kopp’s trial must not lead to another series of assassination attempts directed at physicians who perform abortions. We, therefore, continue to urge law enforcement to remain especially vigilant in enforcing the law and prosecuting those who would use violence to advance their own personal, political agendas.” (National Abortion Federation 3/17/2003)