This page can be viewed at http://www.historycommons.org/entity.jsp?entity=bruce_brown

Bruce Brown was a participant or observer in the following events: 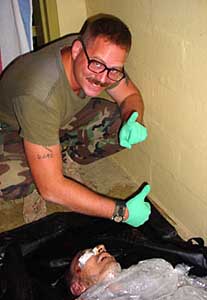 Charles Graner giving the thumbs up over Manadel al-Jamadi’s dead body on November 4, 2003. [Source: Public domain]Spc. Dennis E. Stevanus is summoned to the shower stall of the Hard Site in Abu Ghraib. When he arrives he discovers that detainee Manadel al-Jamadi, interrogated by the CIA less than an hour before (see Between 4:30 a.m. and 5:30 a.m. November 4, 2003), is dead. Jamadi’s body is still shackled to the stall. When the hood is removed, he is found to have severe head wounds. (It is unclear whether these wounds were present when the prisoner was taken in, or whether they were inflicted during the interrogation.) (Serrano 5/18/2004; US Department of Defense 8/23/2004

) Stevanus calls a medic and notifies his superiors. Lt. Col. Steven Jordan arrives at the site at around 7:15 a.m. He finds several MPs and medics in the shower stall. The deceased prisoner is still handcuffed with his hands behind his back, lying on the floor face down. When the body is uncuffed and turned over, Jordan notices a small spot of blood on the floor where his head has lain. (US Department of Defense 8/23/2004

) According to ABC News, Spc. Jason A. Kenner sees the body packed in ice while a “battle” rages between CIA and military intelligence interrogators over who should dispose of the corpse. (Wright 5/20/2004) The body is then put in a body bag, packed in ice, and stored in the shower area. (Hersh 5/10/2004; US Department of Defense 8/23/2004

Sources: Ivan L. Frederick II) Photographs are later released of MP Spcs. Charles Graner and Sabrina Harman posing next to the dead body wrapped in cellophane and packed in ice, giving a “thumbs up.” (Hersh 5/10/2004) According to MP Spc. Bruce Brown, an MP with the 372nd, they spray “air freshener to cover the scent.” (Serrano 5/18/2004) The Criminal Investigation Division (CID) is also alerted. (US Department of Defense 8/23/2004