This page can be viewed at http://www.historycommons.org/entity.jsp?entity=carey_goldberg_1

Carey Goldberg was a participant or observer in the following events: 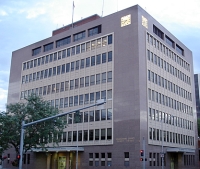 The Yellowstone County Courthouse in Billings, Montana, where the 14 Freemen are arraigned. [Source: Civic Images (.com)]A group of 14 Montana Freemen make their first court appearance after surrending to federal authorities (see June 13, 1996). The 14 Freemen being processed are: Casey Clark, Edwin Clark, Emmett Clark, Ralph Clark, James Hance, John Hance, Steven Hance, Dale Jacobi, Dana Dudley Landers, Russell Dean Landers, Barry Nelson, Cherlyn Petersen, Rodney Skurdal, and Casey Valheimer. The elderly wives of two of the Freemen, Kay Clark and Rosie Clark, face no criminal charges. The Freemen in court are defiant and disruptive. Most of them object to the proceedings and refuse to acknowledge the charges being brought against them. Some of them refuse to acknowledge their names; when Magistrate Robert Holter asks Skurdal his name and explains that he wants to ensure that he is the right person, Skurdal retorts, “I object to your calling me a person, your honor.” Dana Landers responds to a similar question by reciting: “I am a Christian. My flag is red, white, and blue; it’s an American flag. The Holy Scriptures are my law. I’m not familiar with your tribunals.” Each demands their right to “effective counsel,” meaning that they should be able to choose their own lawyers but the court must pay for them. Many object to their names being spelled with all capital letters, as is common in legal briefs. One male Freeman requires physical restraint. Holter refuses to hear their arguments that their own alternative government’s rules must apply over those of the federal legal system. Working through a barrage of shouts, imprecations, and recitations, Holter assigns them lawyers over their objections, and sets arraignment and bond hearings. (CNN 6/12/1996; Goldberg 6/14/1996; Sahagun 6/15/1996) New York Times reporter Carey Goldberg writes: “When they appeared in court on Friday, and rejected everything from the American flag to the capital letters in their names, the 14 newly surrendered Freemen laid bare, in word and posture, the central spirit of the anti-government group that held off federal agents for 81 days. It was a culture of collective denial. Each member came from a different set of circumstances, but the freedom they sought was freedom from American reality.… [W]hat united them was the ideological structure they built, in which the debts they owed were nullified, the criminal charges against them were invalid, and their position in society was considered supreme.” (Goldberg 6/15/1996)