This page can be viewed at http://www.historycommons.org/entity.jsp?entity=carl_swensson_1

Carl Swensson was a participant or observer in the following events:

American Grand Jury logo. [Source: Post & Email (.com)]Walter Fitzpatrick, a Tennessee resident and leading member of a right-wing group called “American Grand Jury” (AGJ), walks into a county courthouse in Madisonville, Tennessee, and informs the foreman of a grand jury, Gary Pettway, that he is under “citizen’s arrest.” Fitzpatrick tells Pettway: “I’m charging you with official misconduct. I’m placing you under arrest. You must now come with me.” AGJ has attempted and failed to convene a grand jury to investigate President Obama for voter fraud, a charge stemming from AGJ’s belief that Obama is not a natural-born US citizen (see October 8-10, 2008). Fitzpatrick says that Pettway has violated state laws governing the length of time a grand jury foreman can serve, and this precipitated his efforts to “arrest” him. The foreman refuses to accompany Fitzpatrick; instead, local law enforcement officials arrest Fitzpatrick for disorderly conduct, inciting to riot, disrupting a meeting, and resisting arrest. Fitzpatrick is jailed for several days. Fellow AGJ member Carl Swensson posts about Fitzpatrick’s incarceration on his Web site, telling site visitors that Fitzpatrick has “put his life on the line for us in very much the same fashion that our founding fathers did.” Swensson then asks: “What do you intend to do for him, and for this country? If we don’t come to his assistance, if we don’t get to the courthouse, if we don’t call him, if we don’t walk and march on that courthouse and that sheriff’s department, we don’t deserve the freedoms we have.… Get down there, get him out of jail, and make sure that justice is served.” (Carl Swensson 4/5/2010; Roth 5/6/2010; Neiwert 5/6/2010) A militia member will later be arrested as part of an abortive attempt to “take over” the Madisonville courthouse and free Fitzpatrick (see April 20, 2010 and After). 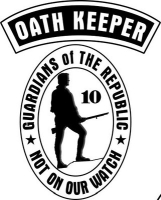 Depiction of an Oath Keeper shoulder patch. [Source: Oath Keepers]Darren Huff, a former US Navy officer from Georgia who belongs to a far-right militia group called the “Oath Keepers” (see March 9, 2009 and March 2010), drives to Madisonville, Tennessee, as part of a group of militia members with the intention of “tak[ing] over” the Madisonville courthouse and freeing Walter Fitzpatrick, who was jailed when he tried to enforce a “citizen’s arrest” on a judicial official for failing to convene an investigation into President Obama’s citizenship (see April 1-5, 2010). The Oath Keepers are a group of former military and law enforcement officials who often advise current military and law enforcement personnel not to obey orders from higher authorities on the grounds that those orders do not satisfy constitutional mandates. Huff drives to Tennessee with a Colt .45 and an AK-47, but is intercepted by state troopers acting on an alert from the FBI. The troopers tell reporters that Huff acknowledges being armed, and states his intention to go to the Madisonville courthouse, take over the facility, and arrest county officials, whom he calls “domestic enemies of the United States engaged in treason,” and turn them over to the state police. According to a witness interviewed by the FBI, Huff is only one member of “eight or nine militia groups” whose intent is to go to Madisonville to “take over the city.” The witness, a bank manager, says Huff told him he’d see Huff’s actions on the news. Madisonville law enforcement officials report witnessing numerous individuals carrying both openly displayed and concealed firearms in the area around the courthouse. The troopers permit Huff to proceed to the courthouse, though Huff attempts no arrests and no violence ensues. The next day, Huff tells a radio audience that his encounter with the troopers was “not entirely confrontational.… We were kind of a little bit more on a friendly level, even some Christian conversation came in, which I was glad for.” He tells his listeners that he showed great restraint by not performing a citizen’s arrest on the troopers, and adds that because the first attempt to free Fitzpatrick was unsuccessful, he and other militia members intend to mount a second “rescue effort” within one to two weeks. Instead, Huff is arrested by the FBI, who listened to the broadcast and determined that he has the means and the intent to cause violence. Carl Swensson, who like Fitzpatrick is a member of the right-wing, anti-government group “American Grand Jury” (AGJ), recounts the entire series of incidents on his Web site, and demands others get involved “to help the citizen’s [sic] of the United States regain our Constitutional Republic by peaceful means.” (WBIR-TV 5/4/2010; Roth 5/6/2010; Neiwert 5/6/2010)