This page can be viewed at http://www.historycommons.org/entity.jsp?entity=carmen_binladin

Carmen Binladin was a participant or observer in the following events:

1997: Bin Laden Family Financial Connection With Osama Continues Until At Least This Year 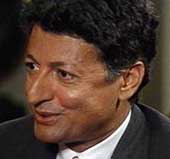 Yeslam bin Laden, Osama’s half brother, and a Westernized leader of the Binladin Group. [Source: Publicity photo]In 2004, Osama bin Laden’s half brother Yeslam Binladin admits that he and other bin Laden family members share a Swiss bank account with Osama bin Laden from 1990 until 1997. The account was opened by brothers Omar and Heidar bin Laden in 1990 with an initial deposit of $450,000. By 1997, only two people are authorized to conduct transactions on the account: brothers Osama and Yeslam bin Laden. The bin Laden family claims to have disowned Osama bin Laden in 1994 (see Shortly After April 9, 1994), and the US government officially designated him as a financier of terrorism in 1996. Yeslam had previously denied any financial dealings with Osama at this late date until evidence of this bank account was uncovered by French private investigator Jean-Charles Brisard. In December 2001, French authorities will open an investigation into the financial dealings of the Saudi Investment Company (SICO) run by Yeslam Binladin. (Agence France-Presse 7/26/2004; Scotsman 9/28/2004; Mascolo and Follath 6/6/2005) In 2002, his house will be raided by French police. (Souchard 3/20/2002) No charges have been made as of yet, but the investigation will continue and in fact widen its scope in late 2004. A French magistrate will claim he is looking into “other instances of money laundering” apparently involving financial entities connected to Yeslam and other bin Laden family members. (Reuters 12/26/2004) Yeslam claims he’s had no contact with Osama in 20 years. Yet, in 2004, when asked if he would turn in Osama if given the chance, he replies, “What do you think? Would you turn in your brother?” (MSNBC 7/10/2004) His ex-wife Carmen Binladin will also comment around the same time, “From what I have seen and what I have read, I cannot believe that [the rest of the bin Laden family] have cut off Osama completely.… And I cannot believe that some of the sisters [don’t support him.] They are very close to Osama.” (Hansen 7/10/2004)