This page can be viewed at http://www.historycommons.org/entity.jsp?entity=celeste_davis_1

Celeste Davis was a participant or observer in the following events: 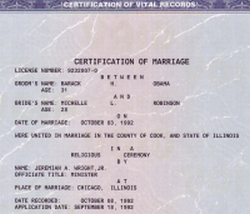 A portion of Barack Obama’s marriage certificate. The full-size original can be viewed online. [Source: St. Petersburg Times]PolitiFact, the nonpartisan, political fact-checking organization sponsored by the St. Petersburg Times, debunks a recent spate of claims that Senator Barack Obama (D-IL), a presidential candidate, has ties to Islamist radicals in Kenya. The claims appear to be sourced from a letter sent by American missionaries in Kenya, saying that Obama has ties to a Kenyan opposition party and warning its readers “not to be taken in by those that are promoting him.” The email also claims: “By the way. His true name is Barak Hussein Muhammed Obama. Won’t that sound sweet to our enemies as they swear him in on the Koran! God bless you.” PolitiFact writes: “The e-mail reads like a bad game of ‘telephone,’ its claims drawn from assorted people and sources that have been stitched together. And yet, because it is signed by real people, who have a life in Africa, it somehow carries more credence than your average blog posting—and it’s spreading rapidly.” PolitiFact has debunked this claim before (see January 11, 2008), but notes that the claim continues to spread. PolitiFact posts a copy of Obama’s 1992 marriage certificate, which states “Barack H. Obama” married “Michelle L. Robinson” on October 3, 1992, in a ceremony officiated by Trinity United Church of Christ pastor Jeremiah A. Wright (see January 6-11, 2008). Obama’s driver’s license record in Illinois identifies him as “Barack H. Obama.” His property listings name him as either “Barack Hussein Obama” or “Barack H. Obama.” His registration and disciplinary record with the Attorney Registration & Disciplinary Commission of the Supreme Court of Illinois notes that Obama was admitted to the Illinois bar on December 17, 1991, and has no public record of discipline. PolitiFact was unable to secure a copy of Obama’s Hawaiian birth certificate (see June 13, 2008). PolitiFact has located the originator of the email, Celeste Davis. Her husband Loren Davis confirms that he cannot substantiate the claims in the email. “That was what we heard there [in Kenya],” Davis tells a PolitiFact interviewer. Davis says he and his wife have lived and worked in Kenya for the past 12 years, and says his wife’s message was from a personal letter “never intended to be forwarded or sent out to the Web.” (St. Petersburg Times 4/18/2008)