This page can be viewed at http://www.historycommons.org/entity.jsp?entity=charitable_society_for_social_welfare_1

Charitable Society for Social Welfare (CSSW) was a participant or observer in the following events: 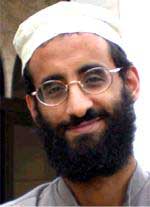 Anwar al-Awlaki. [Source: Public domain]The FBI conducts a counterterrorism inquiry into Anwar al-Awlaki, an imam who will later be suspected of involvement in the 9/11 plot. He serves as the “spiritual leader” to several of the hijackers (see March 2001 and After), and by 2008 US intelligence will determine he is linked to al-Qaeda (see February 27, 2008).

The investigation is opened when it is learned he had probably been visited by a “procurement agent” for bin Laden, Ziyad Khaleel. Khaleel had helped buy a satellite phone for bin Laden; when he is arrested in December 1999 he reportedly tells the FBI crucial details about al-Qaeda operations in the US (see December 29, 1999).

He also serves as vice president of the Charitable Society for Social Welfare (CSSW), the US branch of a Yemeni charity founded by Sheikh Abdul Majeed al-Zindani, a Yemeni imam who the US will officially designate a terrorist in 2004. CSSW also has ties to the Islamic Cultural Institute in Milan, Italy, considered one of the centers of al-Qaeda activity in Europe. The FBI begins investigating CSSW in 1999 after a Yemeni politician visits the US to solicit donations for the charity, and then visits Mahmoud Es Sayed, a known al-Qaeda figure at the Islamic Cultural Institute, on the same trip. (Burr and Collins 2006, pp. 243; Schmidt 2/27/2008)

The FBI learns that al-Awlaki knows individuals from the suspect Holy Land Foundation and others involved in raising money for Hamas. Sources allege that al-Awlaki has even more extremist connections.
But none of these links are considered strong enough for criminal charges, and the investigation is closed. (9/11 Commission 7/24/2004, pp. 517) Al-Awlaki is beginning to associate with hijackers Nawaf Alhazmi and Khalid Almihdhar shortly before the investigation ends. For instance, on February 4, one month before the FBI investigation is closed, al-Awlaki talks on the telephone four times with hijacker associate Omar al-Bayoumi. The 9/11 Commission will later speculate that these calls are related to Alhazmi and Almihdhar, since al-Bayoumi is helping them that day, and that Alhazmi or Almihdhar may even have been using al-Bayoumi’s phone at the time (see February 4, 2000). Al-Bayoumi had also been the subject of an FBI counterterrorism investigation in 1999 (see September 1998-July 1999).