This page can be viewed at http://www.historycommons.org/entity.jsp?entity=chris_bowers_1

Chris Bowers was a participant or observer in the following events: 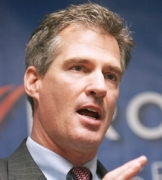 Scott Brown. [Source: Boston Herald]Republican Scott Brown (R-MA) narrowly wins a special election for the US Senate seat vacated by long-time Democratic Senator Edward Kennedy, who passed away in August 2009. Brown defeats Democrat Martha Coakley, the Massachusetts attorney general. The victory is seen as a strong victory for the “tea party” movement, which backed Brown, a former Massachusetts state senator, even though he is considered something of a moderate Republican. Brown raised over a million dollars in less than 24 hours, in large part due to money from lobbying groups that back tea party organizations. Brown’s victory makes the Senate makeup 59 Democrats and 41 Republicans, enough to allow Senate Republicans to mount filibusters against Democratic proposals without fear of party-line “cloture votes” that would let Democrats pass legislation without Republican support. (American Conservative Daily 1/9/2010; Brooks 1/19/2010; The Week 4/15/2010) Brown went on Fox News a number of times in the days before the election to help raise his profile among conservative voters and donors alike. On January 11, Fox News analyst Dick Morris pleaded with Fox viewers to contribute money to the Brown campaign. (Media Matters 1/11/2010) Some observers speculated that Brown’s choice to pose nude for a magazine centerfold in 1982 might hurt him with conservative voters, but Newsweek columnist Katie Connolly wrote that because Brown is male, voters would not hold it against him as they would a female. (Connolly 9/15/2009) Newsweek will later compile a number of sometimes-contradictory explanations for why Coakley loses the race. One is that Coakley ran a poor campaign, an explanation advanced by a number of Democratic figures and liberal commentators. New York columnist Jason Zengerle will write of the singular “ineptitude” of Coakley and her campaign. Some liberal commentators will accuse Democrats of taking Coakley’s victory for granted, backing their explanation with, among other evidence, a memo from the Coakley campaign that noted “apathy” among national Democrats and a lack of money from national sources. Some conservatives will say that voters are alienated by the aggression of the Obama administration and other liberals, which energized conservatives. Some, including White House press secretary Robert Gibbs, will note the “infighting” among Democrats over Obama’s health care reform compromises, and say that such infighting weakened voter support for Democratic candidates. A few liberal commentators will say flatly that Democrats did not do enough to promote Coakley’s candidacy and energize the base. Lastly, a number of liberal commentators, along with Gibbs, will say that Brown rode a wave of anti-Democratic support into office. Blogger Chris Bowers will write that the current “political environment is terrible for Democrats, and they are going to lose seats in 2010.” (Graham 1/19/2010) Before the election, the Boston Herald noted that Brown had been “all but abandoned” by the Republican campaign committees, who apparently believed that he had little chance of winning and chose not to sink money into his campaign. (Chabot 12/29/2009)