This page can be viewed at http://www.historycommons.org/entity.jsp?entity=christopher_meyer

Positions that Christopher Meyer has held:

Christopher Meyer was a participant or observer in the following events:

During a phone call with Christopher Meyer, the British ambassador to the United States, National Security Adviser Condoleezza Rice suggests the possibility of Iraqi complicity in the attacks on New York and Washington. Following the strike on the Pentagon, Meyer held an emergency meeting of his staff at the British Embassy. He then calls Rice to offer condolences and support. He asks her who does she think was responsible for the attacks? In his 2005 memoirs, Meyer will recall: “The names al-Qaeda and Osama bin Laden were already in circulation. She said that the early evidence suggested that it was them. But there could also be a connection with Iraq. That would need investigating.” (Meyer 2002

; Meyer 2005, pp. 188 and 190) However, in a 2007 interview, he will suggest Rice might have made this reference to possible Iraqi complicity in a later call, saying, “I think it was in the same conversation [I had with Rice on the morning of September 11], or it may have been the next one we had very soon after, she said, ‘Well, one thing we need to look into is to see whether Iraq’s had anything to do with this.’” (Meyer 12/20/2007) 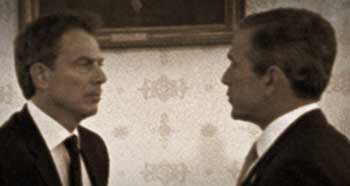 Bush and Blair (left) meeting in the White House around September 20, 2001. [Source: PBS]British Prime Minister Tony Blair meets with President George Bush at the White House. During dinner that night, also attended by Colin Powell, Condoleezza Rice, and British ambassador Sir Christopher Meyer, Blair tells Bush that he wants to concentrate on ousting the Taliban in Afghanistan. Bush replies, “I agree with you Tony. We must deal with this first. But when we have dealt with Afghanistan, we must come back to Iraq.” Blair says nothing to disagree. (BBC 4/3/2003; Rose 4/4/2004; Whitaker 4/4/2004; Burrough et al. 5/2004, pp. 238 Sources: Christopher Meyer)

March 17, 2002: British Ambassador to the US Tells Bush Administration that Britain Backs Regime Change in Iraq; But US and Britain Need a Strategy to Build Support 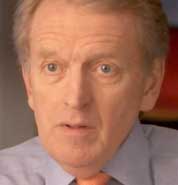 Christopher Meyer. [Source: PBS]British Ambassador to the US Sir Christopher Meyer attends lunch with Paul Wolfowitz and other Bush administration officials in Washington and assures them that the British would support the use of military force against Iraq. Meyer informs Sir David Manning, Tony Blair’s foreign policy adviser, in a memo the following day: “On Iraq I opened by sticking very closely to the script that you used with Condi Rice last week. We backed regime change, but the plan had to be clever and failure was not an option. It would be a tough sell for us domestically, and probably tougher elsewhere in Europe. The US could go it alone if it wanted to. But if it wanted to act with partners, there had to be a strategy for building support for military action against Saddam. I then went through the need to wrongfoot Saddam on the inspectors and the UN SCRs [Security Council Resolutions] and the critical importance of the MEPP [Middle East Peace Process] as an integral part of the anti-Saddam strategy.” (United Kingdom 3/18/2002