This page can be viewed at http://www.historycommons.org/entity.jsp?entity=citizens_united_not_timid_1

Citizens United Not Timid was a participant or observer in the following events: 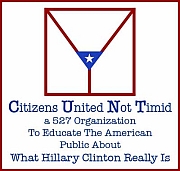 The logo for Citizens United Not Timid, with a graphic illustration representative of female anatomy. [Source: Media Matters]Republican strategist Roger Stone, the founder of a 527 group called “Citizens United Not Timid,” appears on MSNBC’s Tucker, a talk show hosted by conservative pundit Tucker Carlson. Stone’s organization was founded to oppose the presidential candidacy of Senator Hillary Clinton (D-NY), and purports to “educate the American public about what Hillary Clinton really is.” What Clinton “really is,” the organization emphasizes, is the obscenity spelled out by the group’s acronym. The group emphasizes the acronym on its Web site and on T-shirts by showing the first letters of the words in its name in boldface. Stone has appeared on Carlson’s show numerous times in recent weeks. This appearance is notable because NBC, MSNBC’s parent company, recently issued an apology for Jane Fonda’s use of the word “c_nt” on a recent Today Show appearance, when Fonda was discussing the play The Vagina Monologues. Carlson does not inform his audience of Stone’s leadership of the anti-Clinton organization. Stone has said of the organization: “[I]t’s one-word education. That’s our mission. No issues. No policy groups. No position papers. This is a simple committee with an unfortunate acronym.” Stone has said that he and a group of co-founders tried to brainstorm a name for the acronym “b_tch,” but “just couldn’t do it.” In recent days, MSNBC host Chris Matthews apologized for making sexist comments about Clinton, and MSNBC correspondent David Shuster was suspended for making objectionable comments about Clinton and her daughter Chelsea. The liberal media watchdog organization Media Matters writes, “The events of the past few weeks are part of an extensive pattern, documented by Media Matters for America, of sexism, misogyny, and other bigotry heard on MSNBC.” (Pavlus 2/20/2008) In August 2007, Stone was forced to leave the campaign of New York State Senator Joseph Bruno (R-NY) after he left a threatening, abusive, and profane telephone message for the 83-year-old father of Governor Eliot Spitzer (D-NY). (Hakim 8/22/2007)