This page can be viewed at http://www.historycommons.org/entity.jsp?entity=coalition_for_the_international_criminal_court_(cicc)

“This is totally unacceptable. This is the lowest level the United States has sunk to in its leadership at the United Nations.… It is also an attempt to undermine the integrity of the Rome Statute, the mandate of the Security Council and international law.” [Inter Press Service, 7/12/2002]

Coalition for the International Criminal Court (CICC) was a participant or observer in the following events:

February 23, 2003: Bush Tells Aznar US Will Invade Baghdad In March 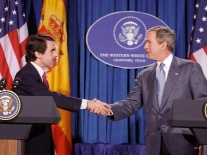 President Bush and Prime Minister Aznar. [Source: Rod Aydelotte/Getty Image]President Bush tells Spanish prime minister Jose Maria Aznar that the US will invade Iraq whether the United Nations Security Council passes a resolution or not (see February 24, 2003). The private conversation takes place at Bush’s Crawford, Texas ranch; the transcript of the conversation is not made public until September 26, 2007, when it is published in El Pais, Spain’s highest-circulation news daily; its accuracy will not be challenged by the White House. The transcript is prepared by Spain’s ambassador to the UN, Javier Ruperez, from a secret US transcript of the meeting. According to English translations of Ruperez’s Spanish transcript, Bush says the US will invade Iraq whether there is “a United Nations Security Council resolution or not.… My patience has ended. I’m not thinking of waiting beyond mid-March.… We have to get rid of Saddam [Hussein].… There are two weeks left.” Bush tells Aznar that Hussein’s government will be overthrown with little destruction, and that he is willing to play “bad cop” to British prime minister Tony Blair’s “good cop.” (Agence France-Presse 9/26/2007; Silverstein 9/26/2007)
Bush Threatens Economic Retaliation If Other Countries Do not Support Invasion - Aznar pleads for patience from Bush, and says that a UN resolution is vital. Aznar notes that public opinion in Spain is heavily against the war. Bush retorts that should certain countries not support the war in the UN, they could face retaliation from the US: “Countries like Mexico, Chile, Angola, and Cameroon should know that what’s at stake is the security of the United States.” Bush mentions negative votes could endanger a free trade agreement with Chile and financial support for Angola. (Agence France-Presse 9/26/2007)
'Chinese Water Torture' - Bush says that Hussein is playing endless games with his “pretenses” towards disarmament. “This is like Chinese water torture,” he says. “We have to put an end to it.… Saddam Hussein will not change and will continue playing.” He says that the US has a package of humanitarian aid already in the works, and has prepared for a post-Hussein Iraq. It is possible, Bush says, that Iraq will be reorganized into a federation, presumably of semi-autonomous ethnic enclaves for the Shi’a, Sunnis, and Kurds. To Aznar’s statement that he is working closely with France’s Jacques Chirac to get a resolution passed in the UN, Bush replies: “Chirac knows perfectly well the reality. His intelligence services have explained. The Arab countries are sending Chirac a clear message: Saddam Hussein must go. The problem is that Chirac thinks he’s Mister Arab and is making life impossible.” (Silverstein 9/26/2007; Hendren 9/26/2007)
No Exile for Hussein; Bush 'At Peace' With Himself - Bush says that suggestions from Egyptian leaders in touch with Hussein that the Iraqi leader could go into exile with $1 million and documents about Iraq’s weapons programs are not being considered. Hussein is “a thief, a terrorist and a war criminal,” he says. After Hussein is overthrown, the US will prosecute him in the International Criminal Court, Bush says. Bush is well aware of the “destruction and death” that the war will bring, he avers, and he is the one who will have to console “the mothers and the widows” of the dead. He says he is optimistic because he believes he is right: “I am optimistic because I believe I am right. I am at peace with myself.” (Agence France-Presse 9/26/2007; Editor & Publisher 9/26/2007) 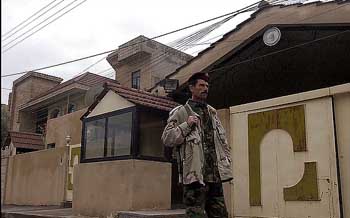 Irbil’s Iranian Liaison Office. [Source: Yahya Ahmed / Associated Press]US forces carry out two raids inside Iraq, capturing five Iranians as well as a large amount of documentary and computer data. Both raids are inside the Kurdish city of Irbil. One raid is at the Iranian Liaison Office, which is used as a local headquarters by the Iranian Revolutionary Guards; according to Iranian sources, five US helicopters land on the roof of the office building around 4 a.m. local time, and US soldiers break down doors, snatch up the five Iranians, and take away boxes of documents and computer equipment. The second raid, at the Irbil airport, ends differently, with US troops finding themselves confronting unfriendly Kurdish troops. Iraqi Foreign Minister Hoshyar Zebari says, “A massacre was avoided at the last minute.” No Iranians are detained as part of the airport raid. The two raids are part of a new US intelligence and military operation launched in December 2006 against Iranians allegedly providing assistance to Iraqi Shi’ite insurgents. Iran’s al-Quds Brigade, which provides funding and military training to other Shi’ite revolutionary groups such as Lebanon’s Hezbollah, is the primary target of the US offensive. “Throughout Iraq, operations are currently ongoing against individuals suspected of being closely tied to activities targeting Iraqi and Coalition forces,” the headquarters of the US-led Multi-National Force-Iraq says in a prepared statement. The month before, two senior Iranians of al-Quds, Brigadier General Mohsen Chirazi and Colonel Abu Amad Davari, were captured in similar raids (see December 21-29, 2006), and freed shortly thereafter. (Alalam News 1/11/2007; Wright and Trejos 1/12/2007; Newswire 1/12/2007) US officials dismiss the raids as “routine.” (Aqrawi 1/11/2007) Months later, a Kurdish government official says that the real target of the raids was not the Iranian liaison officials, but commanders of the Iranian Revolutionary Guards, who were openly visiting Kurdish government officials. The commanders were not captured (see Early April, 2007). (Associated Press 4/6/2007)
Rhetorical Escalation - Bush says that he has ordered US forces to “seek out and destroy the networks” arming and training US enemies, an indirect reference to Iran (see January 10, 2007). Joining Bush in the rhetorical escalation is General Peter Pace, the chairman of the Joint Chiefs of Staff, who charges that Iran is “complicit” in providing weapons designed to kill American troops: “We will do all we need to do to defend our troops in Iraq by going after the entire network regardless of where those people come from.” The Iranian Liaison Office was opened with the approval of the Iraqi Kurds, who maintain a near-autonomous region in northern Iraq with the support of the US. Iran wants to upgrade the office to a formal consulate. US forces did not inform their Iraqi allies of the raids on the office beforehand; the raids may well disrupt Kurdish and Iraqi government attempts to deepen ties with the Iranian government. “This is a very, very dangerous thing,” says Zebari. The Iranian government has protested the raids, and the capture of their five officials, through Iraqi and Swiss diplomats to the United Nations (Switzerland represents US interests in Iran). Tehran insists that all five captured Iranians are diplomats, a claim rejected by US and Iraqi officials. (Wright and Trejos 1/12/2007) The State Department will assert, without presenting proof, that the Iranians are part of a much larger effort by Iran to support the Iraqi Shi’ite militias and insurgents. Apparently the United States’ charges that the Iranians are not diplomats rest on a bureaucratic foible: the five Iranians had applied for diplomatic accreditation, but their paperwork had not been fully processed. The Kurdish government were treating them as if they were accredited. Iran insists that the five are legitimate diplomats regardless of paperwork, and that by capturing them, the US is violating the Vienna Conventions and other international diplomatic regulations. But the US routinely ignores such laws in both Iraq and Afghanistan, causing criticism from human rights organizations and legal experts around the globe. Human Rights Watch researcher John Sifton says, “The US hasn’t articulated the legal grounds under which it detains ‘combatants’. They regularly conflate criminal terrorism, innocent civilians, and real combatants on the ground, and throw them all into the same pot. The vagueness of the war on terror has supplied the soil under which all this has flourished.” (Agence France-Presse 1/25/2007; Akhavi 3/31/2007)
Eventual Release of Some Captives - Months later, the US will release some of the captured Iranians (see November 6-9, 2007).