This page can be viewed at http://www.historycommons.org/entity.jsp?entity=colorado_wild_1

Colorado Wild was a participant or observer in the following events: 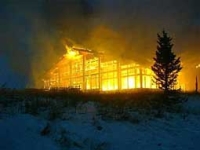 The Vail resort in flames. [Source: Mark Mobley / Colorado Independent]Earth Liberation Front (ELF—see 1997) activists set fire to a Vail, Colorado, ski resort, causing $12 million in damage. At the time, the Vail attack is the costliest ecoterrorist attack in US history. The attack consists of seven separate fires, which destroy three buildings, including the “spectacular” Two Elk restaurant, and damage four chairlifts. In a press release, the ELF says: “[P]utting profits ahead of Colorado’s wildlife will not be tolerated.… We will be back if this greedy corporation continues to trespass into wild and unroaded [sic] areas.” (Anti-Defamation League 2005; Williams 10/19/2008)
Resort Threatens Lynx Habitat - The ELF justifies the bombing by claiming that the resort encroaches on the natural habitat of Canada lynx in the area, an endangered species; an 885-acre planned expansion would, the group claims, virtually destroy the habitat. The resort and other construction have virtually eliminated all lynx from the area. (Funk 9/2007; Williams 10/19/2008; Burnett 11/20/2008)
Activist Says ELF Not a Terrorist Group - In a 2007 jailhouse interview, one of the activists, Chelsea Dawn Gerlach, will discuss her role in the bombing. An activist since her mid-teens, she began by getting involved with “above ground” protests with Earth First! (see 1980 and After), a less overtly militant environmental organization, and became disillusioned when she saw how little effect such protests had on corporate depredations. She will say that she and her colleagues were extremely careful about buying the materials for the firebombs, not wanting to raise suspicions. They built the actual devices in a Utah motel room, with group leader William C. Rodgers, whom Gerlach and the others call “Avalon,” doing the bulk of the work. After performing a final reconnaisance of the lodge, some of the ELF members decide the bombing cannot be done, and return to Oregon. Rodgers actually plants the devices and sets them off; Gerlach, who accompanies Rodgers and others to the resort, later emails the statements released under the ELF rubric. Gerlach will say: “We weren’t arsonists. Many of our actions didn’t involve fires at all, and none of us fit the profile of a pyromaniac. I guess ‘eco-saboteur’ works. To call us terrorists, as the federal government did, is stretching the bounds of credibility. I got involved at a time when a right-winger had just bombed the Oklahoma City federal building—killing 168 people—(see 8:35 a.m. - 9:02 a.m. April 19, 1995) and anti-abortionists were murdering doctors (see March 10, 1993 and July 29, 1994). But the government characterized the ELF as a top domestic terrorism threat because we burned down unoccupied buildings in the middle of the night. It shows their priorities.” (Funk 9/2007)
Apprehensions, Convictions - The Vail firebombing focuses national attention on the organization, as well as on other “ecoterror” groups that use vandalism, arson, and other destructive methods to further their agendas. In December 2006, Gerlach and Stanislas Gregory Meyerhoff will plead guilty to federal arson charges. Gerlach and Meyerhoff have already pled guilty to other arsons committed between 1996 and 2001 by a Eugene-based ELF cell known as the Family, which disbanded in 2001. (Gerlach will say that the Family took great pains to ensure that while property was destroyed, no one was injured; “In Eugene in the late nineties, more than a couple of timber company offices were saved by the proximity of neighboring homes.”) The FBI learned about them from an informant who enticed friends of the two to speak about the crimes in surreptitiously recorded conversations. Both are sentenced to lengthy jail terms and assessed multi-million dollar restitution fines. Two others indicted in the arson, Josephine Sunshine Overaker and Rebecca J. Rubin, who do not directly participate in the Vail firebombing, remain at large. Rodgers will commit suicide in an Arizona jail in December 2005 after being apprehended. Several others will later be arrested and convicted for their roles in the assault. (Associated Press 12/14/2006; Funk 9/2007; Williams 10/19/2008; Burnett 11/20/2008)
Firebombing Detrimental to Local Activism - Gerlach will later say that the Vail firebombing was actually detrimental to local environmental activism. (Funk 9/2007) In 2008, Ryan Bidwell, the executive director of Colorado Wild, will agree. He will say that the fires damaged the trust the community once had in the environmental activist movement, and will add that the federal government used the fires to demonize the entire environmental movement. “I don’t think it really changed the Bush administration agenda, but it probably made their job easier by lumping those actions onto the broad umbrella of terrorism over the last decade,” Bidwell will say. “I don’t think that’s been effective at all, but every time that someone lumps groups here in Colorado under the same umbrella as ELF it’s really disingenuous. In places like Vail that have a history it’s made it more important for the conservation community to communicate what its objectives are.” (Williams 10/19/2008)