This page can be viewed at http://www.historycommons.org/entity.jsp?entity=curtis_m__bedke__1

Curtis M. Bedke was a participant or observer in the following events:

Curtis M. Bedke. [Source: US Air Force]Officials at Barksdale Air Force Base, near Shreveport, Louisiana, are informed that a large plane will be arriving unexpectedly at their base and will require security within the next 30 minutes, and they quickly deduce that the aircraft is Air Force One, the president’s plane, and start preparing for its arrival. (Associated Press 10/2/2001; Freeman 10/2006

)
Officers Given List of Requirements for Air Force One - Colonel Anthony Imondi and Colonel Curtis Bedke of the 2nd Bomb Wing at Barksdale take a call from Air Force One in which they are given a list of requirements requested by the plane’s crew. These requirements include supplies intended to last for at least a day or two, as the president is currently uncertain of his final destination or how long he may need to remain airborne. On the list are, among other things, 150,000 pounds of fuel, 75 box lunches, 10 gallons of orange juice, bagels, muffins, and 25 pounds of bananas.
Commander Deduces Plane Is Air Force One - When Lieutenant General Thomas Keck, the commander of the 8th Air Force at Barksdale, learns of the request, he asks his staff, “Who the heck is this?” His personnel say they don’t know, as the plane would not identify itself except to say there were distinguished visitors on board and it was “Code Alpha,” which means top priority. The pilot of Air Force One, Colonel Mark Tillman, then informs the base that the distinguished visitors are four congressmen. However, Keck suspects the plane is more important and soon works out that it must be Air Force One, carrying the president. He then has just 20 minutes to prepare for the president’s arrival at Barksdale.
Base Prepares for Plane's Arrival - Keck orders his staff to prepare for receiving a large, inbound aircraft, although he and his colleagues try to keep the plane’s identity secret as much as possible. The order goes out for the requested supplies to be gathered from the dining facility on the base, the commissary, or from off-base stores. The base’s security forces, and fuels and maintenance personnel, are instructed to stand by to service the plane. Keck tells the base’s military police unit that the incoming plane will need a full-on security detail as soon as it stops on the runway. (2d Bomb Wing 6/30/2002

)
Officer Told Air Force One Landing at Nearby Airport - Captain Russell Stilling, an operations officer with the 2nd Security Forces Squadron at the base, is initially told only that an “unidentified aircraft” is inbound. Four minutes later he is called by the Secret Service, which tells him the aircraft is in fact Air Force One, but says the plane will be arriving at Shreveport Regional Airport, not Barksdale Air Base, and asks him to assign extra security police. Stilling only realizes Air Force One is landing at Barksdale while he is still on the phone with the Secret Service and he glances at a camera focused on the base’s runways, which is showing the plane coming in to land. (Villafuerte 9/8/2002) Air Force One will land at Barksdale Air Force Base at 11:45 a.m. (see 11:45 a.m. September 11, 2001). (Gibbs 9/14/2001)

(11:55 a.m.) September 11, 2001: President Provided with Tight Security after Getting Off Air Force One at Barksdale Air Force Base 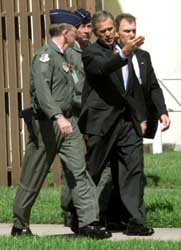 President Bush at Barksdale Air Force Base, accompanied by Lieutenant General Thomas Keck. [Source: White House]President Bush is provided with a high level of security when he gets off Air Force One at Barksdale Air Force Base, near Shreveport, Louisiana, and is promptly driven to a conference center on the base from where he makes a brief phone call. (Keen and Carney 9/11/2001; Newseum et al. 2002, pp. 164; Rove 2010, pp. 258-259) Air Force One landed at Barksdale at 11:45 a.m. and was immediately surrounded by Air Force personnel in full combat gear, with their rifles drawn (see 11:45 a.m. September 11, 2001). (Keen and Carney 9/11/2001; Martin 7/4/2004) Bush remained on board while a retractable set of stairs was lowered for him to leave the plane by.
Reporters Updated on President's Actions - A dark blue Dodge Caravan now pulls up next to these stairs, and a Secret Service agent and two Air Force officers take positions at the bottom of the stairs. The Dodge then pulls away, perhaps 40 feet back from the plane, and is swept inside and outside with dogs. Some members of the president’s staff come down the stairs from the plane. White House press secretary Ari Fleischer approaches the pool of reporters who have been traveling on Air Force One and who are waiting under the plane’s left wing for the president to disembark. Fleischer gives them a brief update on the president’s actions during the flight and adds: “You will see [the president] disembark here shortly. He will head inside and that’s all I’m going to indicate at this moment. You will have additional information shortly.” Fleischer then answers several questions from the reporters.
President Gets off Plane and into Minivan - Bush then descends from Air Force One. (Keen and Carney 9/11/2001; Sammon 2002, pp. 111) The Shreveport Secret Service office has been mobilized to oversee security arrangements while the president is at Barksdale. However, there is no presidential limousine waiting to drive Bush away from the plane. (Rove 2010, pp. 258) Normally the president’s armored limousine would be flown in ahead of time on a military transport plane, but there has been no time to get it to Barksdale. (Sammon 2002, pp. 112) Bush instead gets into the Dodge Caravan, which is being guarded by a Humvee with a .50-caliber machine gun on top. (Rove 2010, pp. 258) White House chief of staff Andrew Card gets in with him. The media and some of Bush’s staff, including his senior adviser, Karl Rove, and his communications director, Dan Bartlett, get into an Air Force minibus. (Keen and Carney 9/11/2001; Sammon 2002, pp. 112)
Bush Taken to Conference Center on Base - The Dodge then drives off at high speed. Bush will later recall that it “blasted off down the runway at what felt like 80 miles an hour. When the man behind the wheel started taking turns at that speed, I yelled, ‘Slow down, son, there are no terrorists on this base!’” (Bush 2010, pp. 132) The Humvee pulls out behind the Dodge, and the airman manning the machine gun on top cocks his weapon and puts a live round in the chamber. The minibus carrying the reporters follows moments later. (Rove 2010, pp. 258-259) The small motorcade drives to the Dougherty Conference Center, a two-story building on the base. At the stroke of noon, Bush and his aides enter the building. A car blocks the driveway and several armed soldiers stand guard while the president is inside. (Keen and Carney 9/11/2001; Sammon 2002, pp. 112)
Bush Speaks to Vice President - Bush and his aides are met by Colonel Curtis Bedke, the commander of the 2nd Bomb Wing, and Lieutenant General Thomas Keck, the commander of the 8th Air Force, apparently as they are entering the conference center. (2d Bomb Wing 6/30/2002

) Inside, Bush picks up a telephone and speaks briefly with Vice President Dick Cheney, who is at the White House. (Sammon 2002, pp. 112) Bush tells Keck he needs to get to a secure phone. Keck says there is one in his office, but this is in a different building on the base. (Freeman 10/2006