This page can be viewed at http://www.historycommons.org/entity.jsp?entity=custer_battles,_llc_1

Custer Battles, LLC was a participant or observer in the following events: 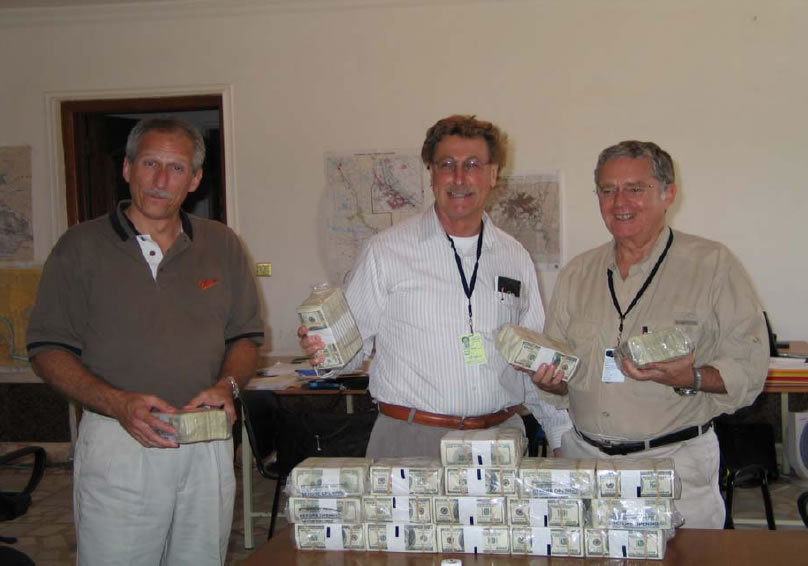 CPA Officials Posing with $2 Million in Cash [Source: US Congress. House Committee on Government Reform] (click image to enlarge)The Coalition Provisional Authority (CPA) awards a $16.84 million sole-source contract to a small McLean, VA -based firm called Custer Battles to provide security at Baghdad International Airport (BIAP). It will later be alleged by former employees of the firm that Custer Battles bilked the CPA by diverting airport personnel to other jobs. An investigation by the Washington Monthly will later discover that the company had very few qualifications for the job and managed the contract in an extremely disorganized manner. One witness describes how the CPA paid the company with a wheelbarrow filled with $2 million in cash. Colonel Richard Ballard, an inspector general for the coalition forces, becomes extremely dismayed with the company’s conduct after examining its performance. His investigation is continuously obstructed by the company which argues that it has no legal obligation to cooperate because it is being paid with Iraqi assets and not money from the Pentagon. He discovers that employees often possess inadequate equipment and training. He is especially appalled by the employees’ “refusal to open the cargo doors of lorries to inspect.” Ballard makes known his concern that the CPA has exercised inadequate oversight of the contract and writes that a “formal audit would likely conclude fraud and potentially gross negligence in the area of contract oversight.” (Special Inspector General for Iraq Reconstruction 7/30/2004, pp. 50

Custer Battles is awarded a “cost plus” contract in Iraq to provide security and logistical support for the Iraqi Currency Exchange, a CPA-created agency charged with replacing the country’s old currency with a new currency. Under the terms of the contract, Custer Battles is to be paid for all of its operational expenses, plus a 25 percent markup for overhead and profit. According to a lawsuit that is later filed against the company, Custer Battles uses a complex network of shell companies to inflate the fee it gets to over 60 percent of its actual costs. In one notorious incident, the company bills the CPA for the use of at least one forklift that it does not even own. The forklift belonged to Iraqi Airways and was confiscated by Custer Battles employees. Paint was used to cover up the Iraqi Airways insignia on the machine. (Special Inspector General for Iraq Reconstruction 7/30/2004, pp. 79