This page can be viewed at http://www.historycommons.org/entity.jsp?entity=dan_creedon_1

Dan Creedon was a participant or observer in the following events: 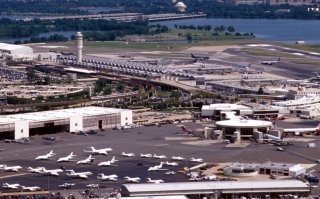 ) And another controller will issue traffic advisories on the aircraft to a C-130 military cargo plane that is flying in the area, and then instruct the C-130 to identify and follow the aircraft (see 9.36 a.m. September 11, 2001). (Federal Aviation Administration 9/17/2001

The air traffic control tower at Washington’s Reagan National Airport is evacuated, after it is informed that a suspicious aircraft—presumably Flight 93—is heading its way.
Warning of Approaching Aircraft - In the control tower, supervisor Chris Stephenson receives a call from the FAA’s Herndon Command Center, telling him: “You have another [aircraft] headed your way. Confirmed bomb on board.” This information also makes it to the Terminal Radar Approach Control (TRACON) at the airport. Around this time, the Command Center changes the information it has for Flight 93’s flight plan, so that it shows a destination of Reagan Airport (see 9:55 a.m. September 11, 2001). This means air traffic controllers are now able to track the flight on their situation displays. But in response to the news that the approaching aircraft has a bomb on board, the facility manager at Reagan Airport becomes concerned about the safety of his employees and decides to evacuate the control tower.
Tower Controllers Evacuated - Dan Creedon, a controller in the TRACON, tries calling the tower repeatedly, to pass on the manager’s instruction to evacuate, but he is unable to get through. He therefore leaves his post and takes the elevator up the tower. Once he reaches the control tower cab, he announces that there are to be “minimum bodies” in the tower, with only a skeletal staff remaining. Four controllers therefore volunteer to leave. (Spencer 2008, pp. 215-216) (Seven or eight controllers usually work in the tower during a given shift, so this would mean three or four controllers remain there. (9/11 Commission 7/28/2003

) )
Terminal Being Evacuated - When they make it down to the airport terminal, the controllers find that it too is being evacuated. Police are yelling at the crowd: “Everybody’s got to go! There are no more flights! Leave your stuff! Just go! It doesn’t matter where you go, just get away from the airport.”
Other Controllers Head to Mobile Unit - The controllers who had remained behind decide they too should leave the tower and relocate to an emergency mobile unit. Before doing so, they temporarily turn over the command and control of their airspace to Washington, DC, police helicopters. They are then escorted by members of the Secret Service down from the tower and through the terminal. (Spencer 2008, pp. 216)

; Vogel 2007, pp. 446) Because the DCANG is not in the communication and command loops of NORAD or its Northeast Air Defense Sector (NEADS), Hutchison is unaware that three fighter jets NEADS ordered into the air from Langley Air Force Base (see 9:24 a.m. September 11, 2001) are also flying over Washington, albeit at a much higher altitude than he is. (Vogel 4/8/2002; Scott 9/9/2002; 9/11 Commission 2/27/2004)
Controller Directs Hutchison - Hutchison calls the Terminal Radar Approach Control (TRACON) at Washington’s Reagan National Airport. He says, “Bully 1 [his call sign] is looking for a contact.” Victor Padgett, the operations supervisor at the TRACON, replies, “We have an intercept for you northwest of here and coming down the Potomac.” (Spencer 2008, pp. 219) Hutchison knows he is meant to be searching for a civilian aircraft, and will later recall that he is told it is coming from Pennsylvania. (9/11 Commission 2/27/2004) In order to conserve fuel and gain airspeed, he flies low over the White House and Georgetown, reportedly staying between 500 and 1,000 feet above ground level. (Scott 9/9/2002; Spencer 2008, pp. 219) After Padgett gives him details of the approaching aircraft’s location, Hutchison spots it on his jet’s radar screen, but it quickly disappears. The aircraft reappears a minute later, but then both Hutchison and Padgett lose sight of it.
Aircraft Claimed to Be Flight 93 - Some accounts will suggest the approaching aircraft is thought to be Flight 93 (see (10:30 a.m.-10:40 a.m.) September 11, 2001), even though that plane has already crashed (see (10:06 a.m.) September 11, 2001). (Vogel 4/8/2002; Spencer 2008, pp. 219-221) Hutchison will later recall that the TRACON at Reagan Airport is “frantic with what they seem to think are aircraft coming their way.… There is another aircraft, and it’s United Flight 93. They… apparently have been given information that it’s coming their way.” (Filson 2003, pp. 81) Major David McNulty, the senior intelligence officer of the DCANG, will recall, “[I]t wasn’t until later that they realized the plane [coming down the river] might be UAL 93.” (9/11 Commission 3/11/2004

) However, John Farmer, John Azzarello, and Miles Kara, who are all staff members of the 9/11 Commission, subsequently rebut this claim. They will write: “[R]adar records of the day [of 9/11] indicate that Major Hutchison did not take off until more than a half-hour after United 93 had crashed near Shanksville, PA, and a good 20 minutes after the wreckage had been located. He could not have seen United 93 on his scope, and could not have intercepted it.” (Farmer, Azzarello, and Kara 9/13/2008)
Told to Investigate Other Aircraft - After the aircraft disappears off Hutchison’s radar screen, Dan Creedon, an air traffic controller at the TRACON at Reagan Airport, is concerned about planes and helicopters that are taking off and landing across Washington, and tells Hutchison, “We have more contacts!” Hutchison confirms that he will investigate the targets Creedon alerts him to, but he keeps losing them among the ground clutter on his radar screen. According to author Lynn Spencer, “The flights are too close to the surface and, from what he can see, appear to be mostly helicopters flying medevac from the Pentagon.”
Flies over the Pentagon - Hutchison, who’d noticed the burning Pentagon before he landed at Andrews Air Force Base (see (9:50 a.m.) September 11, 2001), then decides he should investigate it. He descends and flies a steep turn over the Pentagon. (Spencer 2008, pp. 234-235) He will later recall: “I circled at a couple of hundred feet at the most just to, one, investigate, and two, give the people on the ground some semblance of security of an American fighter coming by. And apparently it changed the mood for a lot of people when they saw that” (see (10:40 a.m.) September 11, 2001).
Running out of Fuel - By now, Hutchison is almost out of fuel. He will recall, “After that point, I’m emergency fuel, the lowest I’ve ever been in an F-16, and tell [the FAA’s] Washington Center I must leave, and they say I’m cleared to return to base and that two more aircraft are coming out of Andrews.” (Filson 2003, pp. 81-82) Hutchison will land at Andrews at 10:47 a.m. (see 10:47 a.m. September 11, 2001). (9/11 Commission 2004; 9/11 Commission 2/17/2004)

One of the FAA’s Cessna Citation V jet planes. [Source: Unknown]Although it was recently redirected toward Richmond, Virginia, the plane carrying Attorney General John Ashcroft tries again to head to Washington, DC, and a military fighter jet arrives to escort it into the capital. (Eggen 9/28/2001; Federal Aviation Administration 3/21/2002; Ashcroft 2006, pp. 118) Ashcroft’s plane, a small government Cessna jet, has been trying to return to Washington after an engagement in Milwaukee was aborted due to the terrorist attacks (see Shortly After 9:03 a.m. September 11, 2001). Ashcroft has ignored requests to land, and so his plane has been threatened with being shot down by the military and diverted to Richmond (see 11:11 a.m. September 11, 2001). (Thomas and Hosenball 9/24/2001; Brill 3/10/2003; Spencer 2008, pp. 257-258)
Pilot Persuaded to Head toward Washington - However, Ashcroft still wants to reach Washington. He therefore calls the Justice Department command center for assistance. Then, according to author Lynn Spencer, “With some high-level coordination,” one of the protective agents on Ashcroft’s plane “convinced the pilot to try once again to enter the city.” (Spencer 2008, pp. 272) The pilot, David Clemmer, negotiates to have fighter jets escort the plane into Washington. (Thomas and Hosenball 9/24/2001; Eggen 9/28/2001)
Controller Requests Fighter Escort - The FAA’s Washington Center consequently calls the Terminal Radar Approach Control (TRACON) at Washington’s Reagan National Airport. The Washington Center controller says: “Hey, we’ve got November 4 out here. He wants to land at [Reagan Airport]. There’s some concern and they want a fighter escort.” TRACON controller Dan Creedon recognizes the plane’s N-number (specifically, N4) as belonging to one of the FAA’s jet aircraft, and confirms, “Yeah, November 4 is based out of Washington.” He then calls District of Columbia Air National Guard (DCANG) pilot Major Daniel Caine, who recently launched from Andrews Air Force Base to defend Washington (see 11:11 a.m. September 11, 2001), and tells him of the plane requesting a fighter escort. When Caine asks who is on it, Creedon replies: “I don’t know. My assumption is FAA-1 or DOT-1,” meaning FAA Administrator Jane Garvey or Transportation Secretary Norman Mineta.
DCANG Pilot Gets Langley Jets to Provide Escort - Caine says the jets launched from Langley Air Force Base (see (9:25 a.m.-9:30 a.m.) September 11, 2001) that are defending Washington (see (Between 9:49 a.m. and 11:00 a.m.) September 11, 2001) will handle this. He forwards Creedon’s request to Major Dean Eckmann, the lead pilot from Langley. Eckmann responds that the inbound plane “can have one” of his fighters. He then directs his wingman, Major Brad Derrig, to intercept it. (9/11 Commission 12/1/2003; 9/11 Commission 12/1/2003; Spencer 2008, pp. 272-273) While Ashcroft’s plane is waiting for Derrig’s fighter to arrive, it is put in a holding pattern outside of Washington. (9/11 Commission 12/17/2003