This page can be viewed at http://www.historycommons.org/entity.jsp?entity=dan_garcia_1

Dan Garcia was a participant or observer in the following events: 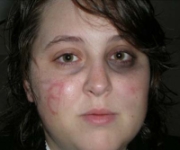 A photograph of Ashley Todd, with a backwards ‘B’ scratched into her face. Todd claims an Obama supporter beat her and scratched the letter into her face. [Source: Dan Garcia / Hollywood Grind]Twenty-year-old Ashley Todd, a volunteer for the presidential campaign of John McCain (R-AZ), tells Pittsburgh police she was attacked, beaten, and robbed by an African-American male who claimed to be a Barack Obama (D-IL) supporter. According to Todd, the man accosted her at a Citizens Bank ATM in Bloomfield, Pennsylvania. He was brandishing a knife, Todd claims. Todd gave him $60. When the man saw a bumper sticker on her car supporting McCain, she says, he punched her in the back of the head, knocked her down, and beat her, saying, “You are going to be a Barack supporter.” He then pinned her down and used the knife to scratch a “B” (for Barack) into her right cheek; she attempted to fight back, but he said he was going “to teach her a lesson for being a McCain supporter” before actually cutting her. He then fled, Todd says. Todd’s left eye is also bruised. The attack happened around 8:50 p.m.; Todd calls the police around 9:30 p.m., after the attack. She initially refuses medical attention. The next day, however, she will receive a full checkup at a local hospital, including an MRI. Todd says she is not a member of the McCain campaign, but went to Washington, DC, in June for training with the College Republicans. She posted pro-McCain and anti-Obama comments on Twitter in the hours preceding the attack, the last one coming just minutes before she alleges she was accosted. She describes her alleged assailant as a dark-skinned black man, 6 feet 4 inches tall, 200 pounds with a medium build, short black hair and brown eyes, wearing dark-colored jeans, a black undershirt, and black shoes. She emphasizes that her assailant is an Obama supporter. Within hours of the alleged attack, Todd posts comments on Twitter about it, along with allegations that she was targeted deliberately by members of the local Obama campaign and exhortations to support McCain in the upcoming elections (see October 23-24, 2008). The Hollywood Grind, reporting on the incident, observes: “Despite the information we’ve gathered above, there are three things that make us skeptical. First, Ashley is a hardcore McCain supporter, as evidenced by her Twitter updates… that show her posting Twitter updates right up until the alleged attack, then the last post three hours after the attack. Second, she initially refused medical attention, but finally got it the next morning. Third, the ‘B’ scratched on her face is backwards, making it look like it was done in a mirror.” (Associated Press 10/23/2008; Hollywood Grind 10/23/2008; Fox News 10/24/2008; Strange 10/25/2008) Todd acts suspiciously almost from the moment the police respond to her complaint. She goes to the house of a friend and fellow College Republican, Dan Garcia, a University of Pittsburgh law student. After being told of the alleged attack, Garcia treats her wounds and contacts the police. When an officer arrives at Garcia’s house, Todd becomes belligerent when asked where the attack took place. “I don’t know!” she shouts, using an expletive. “I’m not from here.” Todd, Garcia, and the officer then drive through Bloomfield, the town where Todd alleges the attack occurred, until they arrive at the Citizens Bank on Liberty Avenue. Todd then tells the officer that the Citizens Bank ATM is where she was attacked. She refuses medical attention offered by the officer, and instead leaves with Garcia to go eat at a diner, apparently making some of her Twitter posts during her time at the diner. It is during this time that Garcia takes the photograph of Todd with the scratched “B” on her face. Garcia then persuades her to go to a nearby hospital. (Fuoco, Sherman, and Gurman 10/24/2008) The next day, Todd will admit to lying about the incident, and will admit to inflicting the “B” on herself (see October 24, 2008). It is unclear how much of her story as reported in the press comes from Todd, and how much of it is embellished by a McCain campaign operative (see October 23-24, 2008). 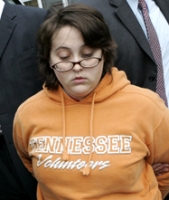