This page can be viewed at http://www.historycommons.org/entity.jsp?entity=daniel_linsalata_1

Daniel Linsalata was a participant or observer in the following events: 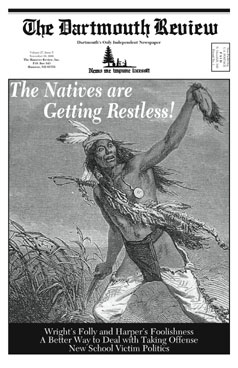 The cover of the Review, depicting a Native American displaying a scalp. [Source: Dartmouth Review via Huffington Post]The Dartmouth Review, a conservative weekly student newspaper funded by off-campus right-wing sources (see 1980), publishes its latest edition; the cover depicts a Native American as what Indian Country Today later describes as a “crazed ‘savage’ holding up a scalp.” The cover headline: “The Natives Are Getting Restless”; the story ridicules Native American students for protesting a recent spate of anti-Native incidents on campus. Dartmouth College was founded in 1769 as a school for Native Americans, and has a long history of supporting Native American causes; in light of its history, the local and national Native American communities have been dismayed in recent years by what they call the anti-Indian sentiments espoused by the Review and other Dartmouth students. The National Congress of American Indians (NCAI) joins with the student organization Native Americans at Dartmouth (NAD) to ask college administrators to address the recent string of “culturally insensitive, biased, and racist” events that they say have created a hostile campus environment at the school. “Colleges and universities are places where diversity and tolerance should foster productive, inclusive, and thriving intellectual communities,” says NCAI President Joe Garcia. “When cartoonization, mockery, and insensitivity of Native peoples, cultures, and traditions persist on college campuses, Native students are at a unique disadvantage in that intellectual community. NCAI joins NAD, [Dartmouth] President James Wright, and the broader Dartmouth community in condemning the recent series of biased incidents at the college, and stands with NAD in its efforts at combating bias in your community.” In recent months, Review staffers and Dartmouth students have orchestrated a number of events that Native Americans call racist and intolerant, including the distribution of homecoming shirts depicting a knight performing a sex act on an American Indian caricature, and the physical disruption by fraternity pledges of an American Indian drumming circle. The publication of the Review with its offensive cover sends the Native American community, and its supporters, into new levels of outrage, with Indian Country Today noting that the illustration of the “savage” has often been used by anti-Native American organizations. Over 500 students, faculty, and administrators take part in a demonstration supporting the Native American community. In response, the Review editor, Daniel Linsalata, calls the cover “hyperbolic” and “tongue-in-cheek,” and says that while he “regret[s]” that the cover “may have” offended some, he stands behind “the editorial content” of the edition. The remainder of his response attacks NAD, and argues that the cover is appropriate to the discussion: “The accusation that this cover was maliciously designed as a wantonly racist attack on Native Americans is patently false,” he says. Wright issues a statement apologizing for the racial slur. Four days after Linsalata’s response, editors Nicholas Desai and Emily Ghods-Esfahani write that the cover was “a mistake” that “distracted attention from the serious journalism the Dartmouth Review has been publishing.” (Linsalata 12/2/2006; Dartmouth Review 12/6/2006; Toensing 12/15/2006)