This page can be viewed at http://www.historycommons.org/entity.jsp?entity=daphne_pinkerson_1

Daphne Pinkerson was a participant or observer in the following events: 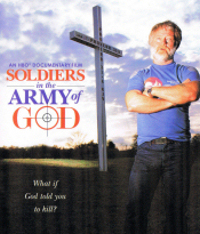 DVD cover illustration of the film ‘Soldiers in the Army of God.’ [Source: HBO / St. Pete for Peace]Cable movie provider HBO airs a documentary, Soldiers in the Army of God, focusing on the violent anti-abortion movement (see 1982, Early 1980s, August 1982, and July 1988) and three of its leaders. National Public Radio airs a profile of the documentary, featuring an interview with the film’s producers, Marc Levin, Daphne Pinkerson, and Daniel Voll. According to Voll, the film focuses on three members of the “Army of God”: young recruit Jonathan O’Toole, who says he was looking for the most “radical” and “terroristic” anti-abortion group he could find; Neal Horsley, who runs an anti-abortion Web site; and long-haul trucker Bob Lokey, who recruits new members.
'Violent Fringe' of Anti-Abortion Opposition - Voll describes the three as part of the “violent fringe” of anti-abortion opposition: “These are the guys on the ground who are—whatever the words that politicians and other leaders of these cultural wars can put out there, these are the men who hear them and feel emboldened by them, who feel encouraged by each other, and they are every day praying for God’s will in their life.” Another unidentified man says: “Anybody who raises a weapon up against these people who are slaughtering these babies, before God and the entire world, right now I say you are doing God’s own work. And may the power of God be with you as you aim that rifle. You’re squeezing that trigger for Almighty God.” In the documentary, an unidentified anti-abortion activist says: “There are people in this world right now who are looking for directions on what do we do. Well, we end abortion on demand by the most direct means available to us. So stop the abortion with a bullet, if that’s what it takes. Stop it with a bomb, if that’ s what it takes. You stop abortion on demand. Don’t let it go any farther.” O’Toole says that the “next step is to arm ourselves in a militia, a real militia that has the power to resist the federal government.” Pinkerson says that O’Toole, who was 19 when he joined the Army of God, found Horsley on the Internet through Horsley’s Web site, “The Nuremberg Files,” which lists doctors who perform abortions (see January 1997). O’Toole became Horsley’s assistant, and through him met Lokey, who runs a Web site called “Save the Babies.” In the film, O’Toole, whom the producers speculate may eventually become an assassin of abortion providers, says that because of America’s legalization of abortion, the country has become like “Nazi Germany. It’s like you’ve got concentration camps around you.” Levin notes that filmed conversations between Horsley and Lokey show that many in the movement feel threatened by the concept of women’s equality, and blame men’s failure to exert “dominion” over women as part of the reason why the US legalized abortion. (Montagne 3/30/2001; Clarkson 3/30/2001)
Opposition to Homosexuality - Horsley draws a connection between the organization’s opposition to abortion and the American citizenry’s supposed opposition to homosexuality, saying: “If the American people woke up, and realized that they had to choose between legalized abortion, legalized homosexuality, and legalized all the rest of the desecration or civil war which would cause the rivers to run red with blood—hey, you know we will see legalized abortion go like that! We’ll see legalized homosexuality go like that! Because the American people are not willing to die for homosexuals.”
Bringing Bomb-Making Materials to Washington - The film also shows Lokey bragging to convicted clinic bomber Michael Bray (see September 1994) that he has just trucked 45,000 pounds of ammonium nitrate, a substance that can be used to make “fertilizer bombs” similar to the one that destroyed an Oklahoma City federal building (see 8:35 a.m. - 9:02 a.m. April 19, 1995), into Washington, DC.
Anti-Abortion Opposition Part of an 'Apocalyptic' Death Struggle - Author and reporter Frederick Clarkson writes: “At once shocking, compelling, and beautifully made, the film is essentially the national television debut for the aboveground spokesmen and spokeswomen of the Army of God.… Horsley and others are quite clear in their public statements and their writings that the attacks on clinics and the murders of doctors are but warning shots in what they envision as an epochal, even an apocalyptic struggle at hand. Either Americans conform to their view of God’s laws, or there will be a blood bath, they say. And there is no evidence that they are anything but dead serious.” (Clarkson 3/30/2001)