This page can be viewed at http://www.historycommons.org/entity.jsp?entity=darrell_pope_1

Darrell Pope was a participant or observer in the following events: 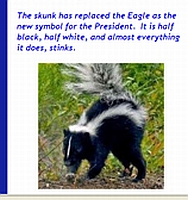 A screenshot from the Hutchinson, Kansas, Patriot Freedom Alliance Web site comparing President Obama to a skunk. The photo and accompanying text was quickly removed after it was reported in a local newspaper. [Source: Hutchinson News]Thomas Hymer, the leader of the Hutchinson, Kansas, Patriot Freedom Alliance (PFA), also known as the Hutchinson Tea Party, places a picture of a skunk on the PFA’s Web site and says it should supplant the bald eagle as the symbol for President Obama. The Web site explains why a skunk should represent Obama, stating, “It is half black, half white, and almost everything it does, stinks.” Hymer calls the picture “satire in a politically incorrect form,” but Hutchinson NAACP leader Darrell Pope says it is “a blatant statement of racism… intended to be malicious.” Pope says that tea party organizations like Hymer’s can pretend to support Herman Cain, a black Republican presidential candidate, all they like, but the skunk posting is “a statement of what they’re all about.” Local tea party activist Chuck Sankey agrees with Hymer, saying: “It just makes a point that we’re in trouble and what’s happening doesn’t smell right. That’s what it means to me.” As for the half-black, half-white reference, Sankey asks: “Isn’t that the truth? What’s wrong with the truth?… It may be offensive to some, of course, but in humor there is always an element of truth.” Sankey, who denies he is a racist, says if people are offended, then “Don’t look at it.” Sankey adds that the graphic is justified because former Republican vice-presidential candidate Sarah Palin (R-AK) has been the target of worse insults. After the article about the skunk graphic is posted to the Hutchinson News Web site, Hymer or another Hutchinson Tea Party member removes the graphic from the site. A Web post by The New Civil Rights Movement says another anti-Obama Web site, ObamaForwards.com, displayed the same photo and text accompaniment in July 2010. A commenter on the article says the Hutchinson Tea Party sported a Confederate flag on its float in a recent Christmas parade. (Clarkin 12/10/2011; Taintor 12/12/2011; David Badash 12/12/2011)