This page can be viewed at http://www.historycommons.org/entity.jsp?entity=david_a__love_1

David A. Love was a participant or observer in the following events: 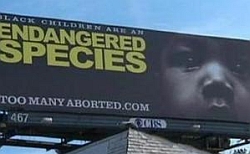 A photo of one of the billboards erected by two Georgia anti-abortion organizations. [Source: Opposing Views (.com)]Anti-abortion organizations are putting billboards up throughout Atlanta claiming, “Black children are an endangered species.” The organizations Georgia Right to Life and Radiance Foundation have placed 65 billboards throughout the Atlanta area, and are planning to erect more throughout Georgia. The groups’ Web site, “toomanyaborted.com,” says legalized abortion is a crisis in the African-American community because, they claim, 40 percent of pregancies among African-Americans end in abortion. Abortion is an evil analogous to Jim Crow segregation and eugenics, the site writes, with abortion clinics placed in “urban areas where blacks reside.” They claim that Planned Parenthood’s founder wanted to reduce the black population. And, the site suggests, the legalization of abortion has led to the deterioration of black families, sexual promiscuity, child abuse, and urban decay. The site provides statistics from the Centers for Disease Control (CDC) that show a disproportionate number of abortions in Georgia were performed on black women, and Georgia is second only to New York and Texas in the number of black women who have abortions. However, as a report from The Grio’s David Love notes, “the CDC data provides no evidence that black children are an endangered species because of abortion.” Instead, many critics of the billboard campaign say the billboards characterize black women as criminals who kill their own children. The organizations take umbrage at this characterization, stating: “Contrary to the statements being made, the Endangered Species Campaign is not designed to target black women, but is designed to educate. The toomanyaborted.com website has documented information to support our contention that the number of black babies aborted in the US and in Georgia are at holocaustic levels. Since 1973 more than 18,000,000 black babies have been aborted. Georgia, in 2008, set a record in the numbers of abortions performed on black women, almost 21,000. We are not targeting black women, but are fighting for black babies.” Love writes that while it may be reasonable to view the number of black abortions with alarm, and that it is even arguable that African-Americans have been “an endangered species” for 400 years, the reasons cited by the anti-abortion groups are completely wrong. “[B]lack children today are in a crisis because of poverty, hunger, and a lack of opportunity,” Love notes. “At some point in their childhood, 90 percent will require food stamps. An increasing number of black children, 3.7 million, do not know when or where they will find their next meal, according to a USDA report. They are subjected to an inferior education in crumbling schools. Although they are 15 percent of American children, they are 32 percent of the 510,000 children in foster care, and are less likely to be adopted than white children. In many depressed urban communities, they face a cradle-to-prison pipeline. And poor children of color are more likely to face health challenges.” Groups such as Georgia Right to Life and Radiance “are never around to speak up on behalf” of black children who are battling poverty and neglect, Love writes, “so forgive me if I think these eleventh-hour cries of black genocide ring hollow. In fact, the Christian Right never stood up for African-American children, and always supported the gutting of social safety net programs that would help them. Focused singularly on fetuses, abortion opponents give the impression they care little about the well-being of children who were already born, and who struggle to survive in the midst of deprivation, hopelessness, and unresponsive public policy.” (Love 2/9/2010)

June 2011: Republican Presidential Candidate: ‘America Was a Great Country before 1965’

Former Republican Senator Rick Santorum (R-PA), joining the race to contend for the Republican presidential nomination, tells an audience at the Faith and Freedom Conference in Washington that America was a much better place before 1965, when the Voting Rights Act (VRA—see August 6, 1965 and June 29, 1989) was enacted and the “welfare state” began. “Social conservatives understand that America was a great country because it was founded great,” Santorum says. “Our founders, calling upon in the Declaration of Independence, the supreme judge, calling upon divine providence, said what was at the heart of American exceptionalism.… ‘We hold these truths to be self-evident, that all men are created equal and endowed by our creator with certain inalienable rights.‘… Ladies and gentlemen, America was a great country before 1965.” Reporter David Love notes that in 1965, institutionalized racism was still the law in many areas of the country. Police brutalized voting rights protesters and civil rights workers were murdered without legal repercussions. The civil rights legislation enacted during this time began the variety of federal “safety net” programs such as food stamps, aid for mothers and their children, disabled citizens, and others, and also began stamping out institutionalized, legal racism. Medicare and Medicaid were enacted under the Social Security Act of 1965. The 1965 Omnibus Housing Act provided funds for building housing for indigent Americans, including many African-Americans. The federal government began funding public schools in 1965. And two years later, the courts used 1965 legislation to overturn laws against miscegenation—interracial marriage. Love concludes: “So the question remains, was America better before 1965? Well, it depends on your point of view. If you are a conservative who views the Great Society legacy as a big government intrusion into the lives of people, then the answer is yes. If you think government has no business protecting civil rights, funding schools and feeding hungry children, increasing economic opportunity, and promoting the arts, your answer will undoubtedly be yes. However, if you are an African-American who enjoys exercising the right to vote, or a senior who doesn’t want anyone touching your Medicare, or someone who believes the federal government has a role to play in fighting poverty, chances are you have a different view of things.” (Love 6/7/2011)