This page can be viewed at http://www.historycommons.org/entity.jsp?entity=david_brinkley_1

David Brinkley was a participant or observer in the following events: 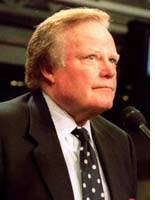 Roone Arledge. [Source: Slate (.com)]Roone Arledge, the president of ABC Sports, becomes president of ABC News as well. Arledge brings some of the techniques he pioneered as head of the sports division to ABC’s news broadcast practices, including what many call his “up close and personal” approach to politicians and others of interest to the news. Many at ABC opposed Arledge’s ascension, as he lacks any formal training as a journalist, and they fear Arledge will “dumb down” the way news is presented. Many fear he will bring “glitz, glamour, and lower standards to the network,” as Ken Bode will write in 1994. ABC anchor Ted Koppel will later remember: “Peter Jennings and I were convinced hiring Roone was a big disaster. We went to see Fred Pierce, who was then president of ABC.… Roone was famous for having the vision in sports to look at things like slow-motion television and the ability to freeze a frame and the instant replay that flowed out of that. Others invented those technologies; Roone was the man who saw them and said, ‘Here’s a way of doing something on television that’s never been done before.’ And we all gave him credit for that. But we didn’t believe that was what was needed to turn ABC News into a more powerful news division.… [Pierce] listened to us explain why Roone should never become president of ABC News. Then he very politely ushered us out and ignored us.” Arledge will function as head of both the news and sports departments for 17 years; under his guidance, ABC News will earn a number of prestigious awards and lead the ratings for many years against its two network competitors. “Roone created the forum for each of us,” Koppel will later say. “Barbara Walters got 20/20, Peter Jennings got World News Tonight, I got Nightline, Sam Donaldson got PrimeTime Live, and ultimately Roone created This Week With David Brinkley.” CBS News producer Don Hewitt will say after Arledge’s death in 2002, “Just about everything that’s good in television has a Roone Arledge trademark on it.” (Bode 3/13/1994; Rubenstein 12/29/2002; Disney Legends 2007) Jennings will recall, “There are only a few people in the business who are really good at looking at a piece in draft, either on paper but particularly on tape, and moving it around so that the up-close-and-personal nature of journalism was front and center.” Arledge will focus ABC’s news broadcasts far more on personalities, sophisticated camera and electronic innovations, and “feature” presentations, and less on issues and so-called “hard news,” transforming the way Americans perceive the news. (Rubenstein 12/29/2002) In 2002, Robert Weintraub will deplore Arledge’s penchant for turning journalists and news anchors into celebrities. “[S]ome of his schemes, however brilliant at the time, have made TV sports painful to watch and news almost impossible to finance,” Weintraub will write. “If network executives want to know why TV news is hemorrhaging money, they can start by looking at the anchors’ movie star salaries.” (Weintraub 12/29/2002) Bode will write in 1994: “He [was] determined to give the viewers what they were interested in, not necessarily what they needed to know. On the day Elvis [Presley] died in 1977, Mr. Arledge made that the lead story on the ABC evening news; the other networks led with a Washington story about the Panama Canal treaties. It may be the truest measure of Mr. Arledge’s influence on television that on a comparable news day today, all the broadcasts would lead with Presley’s death.” (Bode 3/13/1994)