This page can be viewed at http://www.historycommons.org/entity.jsp?entity=david_kelly_1

David Kelly was a participant or observer in the following events: 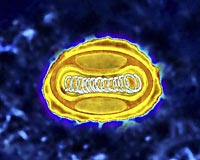 An enhanced photo of the variola virus, which causes smallpox. [Source: University College London]New York Times reporter Judith Miller reports that the CIA is investigating an anonymous report that Iraq has obtained a virulent strain of smallpox from a Russian scientist. According to the anonymous informant, the smallpox may have come from Nelja N. Maltseva, a virologist who worked for over 30 years at the Research Institute for Viral Preparations in Moscow before her death in 2001. The CIA has briefed President Bush about the investigation, though, as Miller notes, “The attempt to verify the information is continuing.” Maltseva visited Iraq in 1972 and 1973, according to intelligence officials, and may have visited as recently as 1990. The facility where she worked housed what Russia has claimed was its entire national collection of some 120 strains of smallpox. Miller writes, “[S]ome experts fear that she may have provided the Iraqis with a version that could be resistant to vaccines and could be more easily transmitted as a biological weapon.” In response, the White House may decide that 500,000 military personnel and another 500,000 civilian medical workers should be vaccinated against smallpox, a disease officially eradicated in 1980. The White House says that despite promises made by Russian President Vladimir Putin, Russia has not cooperated with US requests for information about its smallpox strains. “There is information we would like the Russians to share as a partner of ours,” says William Winkenwerder Jr., assistant secretary of defense for health affairs. “Because if there are strains that present a unique problem with respect to vaccines and treatment, it is in the interests of all freedom-loving people to have as much information as possible.” Recently declassified Soviet-era records show that in 1971, Maltseva was sent to Aralsk, a port city in what was then the Soviet republic of Kazakhstan, to help stop an epidemic of smallpox. That outbreak was possibly the result of open-air tests of a Soviet smallpox strain. Some scientists worry that Maltseva may have shared the Aralsk strain with Iraqi scientists in 1990, according to administration sources. David Kelly, a former United Nations weapons inspector in Iraq, says there was a “resurgence of interest” in smallpox vaccine in Iraq in 1990, “but we have never known why.” Both Maltseva’s daughter and her deputy in the Moscow laboratory deny that Maltseva ever went to Iraq. (Miller 12/3/2002)