This page can be viewed at http://www.historycommons.org/entity.jsp?entity=david_wade_1

David Wade was a participant or observer in the following events:

December 14, 2004: President Bush Gives George Tenet and Others the Medal of Freedom 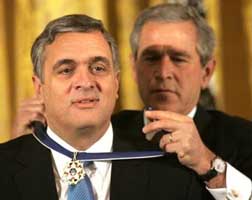 President Bush awards Tenet the Medal of Freedom. [Source: Associated Press]President Bush gives the Presidential Medal of Freedom to former CIA Director George Tenet, former Iraq war leader General Tommy Franks, and former Iraq functionary Paul Bremer. The Medal of Freedom is the highest honor the president can bestow. Bush comments, “This honor goes to three men who have played pivotal roles in great events and whose efforts have made our country more secure and advanced the cause of human liberty.” (Associated Press 12/14/2001; Gerhart 12/14/2004) However, the awards will come in for some criticism, as Tenet, CIA director on 9/11, wrongly believed Iraq had weapons of mass destruction (see December 21, 2002), Bremer disbanded the Iraqi army (see May 23, 2003), and Franks, responsible for the invasions of Afghanistan and Iraq, failed to assign enough troops to the hunt for Osama bin Laden, thereby enabling him to escape (see Late October-Early December 2001). (Cohen 12/14/2001) John McLaughlin, Tenet’s deputy director, will later say that Tenet “wishes he could give that damn medal back.” (Shenon and Mazzetti 10/2/2006) White House press secretary Scott McClellan will later write that this “well-intentioned gesture designed to create positive impressions of the war seemed to backfire.” Instead of holding these three accountable for their role in the deepening Iraq crisis, Bush hails them as heroes. McClellan will observe: “Wasn’t this supposed to be an administration that prided itself on results and believed in responsibility and accountability? If so, why the rush to hand out medals to people who had helped organize what was now looking like a badly botched, ill-conceived war?” (McClellan 2008, pp. 250-251) David Wade, a spokesman for Senator John Kerry (D-MA), says, “My hunch is that George Bush wasn’t using the same standard when honoring Tenet and Bremer that was applied to previous honorees.” Previous recipients include human rights advocate Mother Teresa, civil rights icon Rosa Parks, and Pope John Paul II. Senator Carl Levin (D-MI) says he “would have reached a different conclusion” on Tenet. “I don’t think [he] served the president or the nation well.” (Associated Press 12/14/2001) Reporter Steve Coll will later comment: “I presume that for President Bush, it was a signal that he wasn’t making Tenet a scapegoat. It would be the natural thing to do, right? You’ve seen this episode of ‘I, Claudius.’ You know, you put the knife in one side and the medal on the other side, and that’s politics.” And author James Bamford will say: “Tenet [retired], and kept his mouth shut about all the things that went on, about what kind of influence [Vice President Dick] Cheney might have had. They still have a CIA, but all the power is now with his team over at the Pentagon. They’re gathering more power every day in terms of intelligence. So largely, Cheney won.” (Kirk 6/20/2006) Author and media critic Frank Rich will later write: “The three medals were given to the men who had lost Osama bin Laden (General Tommy Franks), botched the Iraq occupation (Paul Bremer), and called prewar intelligence on Saddam’s WMDs a ‘slam dunk’ (George Tenet). That the bestowing of an exalted reward for high achievement on such incompetents incited little laughter was a measure of how much the administration, buoyed by reelection, still maintained control of its embattled but not yet dismantled triumphalist wartime narrative.” (Rich 2006, pp. 158)