This page can be viewed at http://www.historycommons.org/entity.jsp?entity=dean_clark_1

Dean Clark was a participant or observer in the following events: 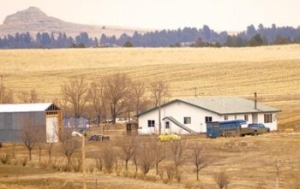 The Clark ranch. [Source: Billings Gazette]The Clark family of Jordan, Montana, led by Ralph Clark and including his brother Emmett, Emmett’s wife Rosie, Ralph’s son Edwin, his nephew Richard, his grandson Casey, and Richard’s wife Kay, begin exhibiting radical anti-government views. The Clarks, who work a 960-acre wheat farm, are not averse to accepting over $700,000 in government assistance, but due to poor planning and overextensions due to land and machinery purchases, they find themselves deeply in debt. In 1981, they stop paying their federal farm loans. By 1995, they owe $1.8 million in missed payments. By that time, the Clarks have begun listening to the tax-resister, anti-government rhetoric of the “Montana Freemen” in Roundup, Montana, some 150 miles away (see 1983-1995 and 1993-1994). Alven Clark, Ralph and Emmett’s brother who refuses to join them in their increasingly extremist views, will later say: “This thing just kept building every time I talked to them. They just listened to these prophets.” After their farm is foreclosed and sold at a sheriff’s auction for $493,000, the Clarks take a central part in one of the Freemen’s first major assaults on the local judiciary (see January 1994). (Mark Pitcavage 5/6/1996) In 1996, Ralph Clark’s grand-nephew Dean Clark will say: “My grandfather worked hard all his life, but his brother is another story. Ralph Clark has always been into one get-rich-quick scheme after the next. But he hasn’t done any real work. He hasn’t done a damn thing for the past 15 years but drink coffee, smoke cigarettes, and look out the window and daydream.” (Johnson 6/10/1996)

A flurry of talks between FBI negotiators, outside parties, and the holed-up Montana Freemen (see March 25, 1996) signals that the 80-day standoff is about to conclude. Yesterday, LeRoy Schweitzer, the jailed leader of the Freemen, gave his blessing for a surrender (see June 11, 1996). A 16-year-old girl, Ashley Landers (whom federal authorities say is legally named Amanda Michele Kendricks), voluntarily leaves the compound; a local prosecutor says she will be taken into state custody. She was the last child left inside the compound. Karl Ohs, a Montana legislator acting as a mediator between the FBI and the Freemen (see April 17, 1996), arrives in nearby Jordan, Montana, to help conclude the final surrender negotiations. Agents in flak jackets dismantle the tent-like shelter at the compound’s entrance, used for meetings between Freemen and negotiators, and other agents drive three passenger vans to a nearby church, apparently in preparation for the Freemen’s surrender and departure. The FBI wins the cooperation of neighboring farmer Dean Clark, who tries to begin planting on 2,300 acres adjacent to the Freemen ranch; he agrees to delay planting for a day. (Associated Press 6/13/1996; Goldberg 6/13/1996) The next day, the Freemen surrender peacefully (see June 13, 1996).