This page can be viewed at http://www.historycommons.org/entity.jsp?entity=dean_nelson_1

Dean Nelson was a participant or observer in the following events:

February 18, 2010: Virginia Republican Says Disabled Children Are ‘God’s Punishment’ to Mothers Who Have Had Abortions 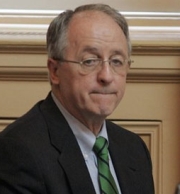 Bob Marshall. [Source: Chicago Now (.com)]Virginia State Delegate Bob Marshall, a Republican, says that disabled children are God’s way of punishing women who have had abortions. Marshall makes his statement at a press conference outlining his opposition to Virginia funding for Planned Parenthood. “The number of children who are born subsequent to a first abortion with handicaps has increased dramatically,” he says. “Why? Because when you abort the first born of any, nature takes its vengeance on the subsequent children.… In the Old Testament, the first born of every being, animal and man, was dedicated to the Lord. There’s a special punishment Christians would suggest.” Dean Nelson, head of the Network of Politically Active Christians, says at the same press conference that Planned Parenthood is an “unethical, immoral, and racist” organization because it includes abortions in its comprehensive care for women, and says it should change its name to “Klan Parenthood” because its founder, Margaret Sanger, made statements some considered racist in the 1930s. At the same conference, the Reverend Joe Ellison says he is “declaring war against Planned Parenthood.… We’re asking pastors to shut them down in the community. We’re asking pastors to pray them out. And we’re asking Planned Parenthood to leave our children alone.” Virginia Governor Bob McDonnell (R-VA) opposes continued funding for Planned Parenthood. A spokeswoman for Planned Parenthood says the only Virginia funding it receives is from Medicaid reimbursements; in 2009, the organization received $35,000 in state funds. Marshall later denies any intention of insulting disabled children, and implies that his words were misquoted or misconstrued. In a post on his Web site, he writes: “No one who knows me or my record would imagine that I believe or intended to communicate such an offensive notion. I have devoted a generation of work to defending disabled and unwanted children, and have always maintained that they are special blessings to their parents. Nevertheless, I regret any misimpression my poorly chosen words may have created as to my deep commitment to fighting for these vulnerable children and their families.” (Radcliffe 2/22/2010; Montpoli 2/22/2010) Video of Marshall’s statement proves that his words were reported accurately. (Right Wing Watch 2/23/2010) A day after the news breaks in the press, Jean Winegardner, a writer and the mother of an autistic child, lambasts Marshall’s statements in a post on the Washington Times Web site. She writes in part: “Mr. Marshall, I don’t much care that you have reinterpreted your statements after they came under fire. What I do care about is that you told my disabled child—and every other disabled child—that he is a punishment, that he is less than, that he is wrong. You have also told him that his mother is wrong. You have created a situation where someone has to be to blamed for disability. You say that you have ‘devoted a generation of work to defending disabled and unwanted children.’ I don’t know your record because I haven’t followed your career, but working to defend children starts by accepting them as valued and right. You can’t say in one breath that these children are fundamentally flawed by their mother’s ‘sin’ and then turn around and claim to defend them. If you really do support people with disabilities… treat them with respect. Show us with your actions that you really do value this segment of society. Prove us doubters wrong by standing up tall for individuals with disabilities. And always remember that words hurt—just as your words hurt me and my family. My disabled child has never and will never be a punishment. I value him, love him, and am grateful for his perfect autistic existence every day of his and my life. His being is a gift, and could never be described as ‘nature’s vengeance.’” (Winegardner 2/23/2010)