This page can be viewed at http://www.historycommons.org/entity.jsp?entity=dennis_doonan_1

Dennis Doonan was a participant or observer in the following events: 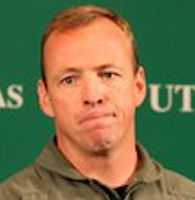 Joe McGrady. [Source: John P. Meyer]Two F-15 fighter jets take off from Otis Air National Guard Base in Cape Cod, Massachusetts, the first to do so after NORAD’s Northeast Air Defense Sector (NEADS) ordered the base to launch all of its available aircraft (see (10:20 a.m.) September 11, 2001). However, these two fighters are unarmed. (9/11 Commission 10/14/2003

; Spencer 2008, pp. 245-246) The 102nd Fighter Wing of the Massachusetts Air National Guard operates from Otis Air Base, and is responsible for defending the northeastern US against various threats, including terrorist attacks. (Kinsella and Dennehy 9/12/2001; Kinsella 9/12/2001) The aircraft maintenance squadron officer started preparing the unit’s F-15s for combat less than 15 minutes after the second attack in New York (see (9:15 a.m.) September 11, 2001). (Spencer 2008, pp. 155) But despite the reportedly “furious pace of the weapons handlers” who “hurried to fix all available jets with live weapons,” only a few fighters have so far been loaded with any armament. (Dennehy 9/8/2002; Spencer 2008, pp. 245)
Fighters Launch with No Weapons - The first two fighters to take off are piloted by Dennis Doonan and Joe McGrady. As they are the first pilots to start their F-15s and taxi off the flight line (the parking and servicing area for aircraft), they are paired up. But Doonan suddenly realizes that, though he is being sent into a combat situation, his fighter is unarmed. He radios McGrady and tells him, “I’m Winchester!” (“Winchester” is the code word for having no weapons.) McGrady’s aircraft is also unarmed, so McGrady immediately radios squadron commander Lieutenant Colonel Jon Treacy and in a panic tells him: “We’re Winchester, SOF [supervisor of flying]! We’re Winchester!” But Treacy instructs him: “Just go! You need to get airborne now!” McGrady and Doonan head out for takeoff, not knowing where they are going or what they will have to do, but realizing that if they have to take out a target, they must do so with their own aircraft. Once they are airborne, they will intercept a KC-10 tanker plane and four A-10 jets (see (11:04 a.m.) September 11, 2001), and then set up a combat air patrol over Boston. (Spencer 2008, pp. 245-247)
Other Fighters Take Off Armed - Another two F-15s will take off from Otis Air Base shortly after McGrady and Doonan’s fighters (see (Shortly After 10:30 a.m.) September 11, 2001). These aircraft will have had their guns loaded and armed for use, but one of them will take off with only one missile loaded instead of two. (Lehmert 9/11/2006; Richard 2010, pp. 15-16, 18) The 102nd Fighter Wing’s two F-15s that are kept on “alert”—armed and ready for immediate takeoff—launched at 8:46 a.m., in response to the hijacked Flight 11 (see 8:46 a.m. September 11, 2001). (9/11 Commission 7/24/2004, pp. 20) Fourteen of the base’s fighters will be “mission capable” by the end of the day, and six fighters will be airborne at a time, according to Technical Sergeant Michael Kelly, the full-time technician in the command post at Otis Air Base. (9/11 Commission 10/14/2003 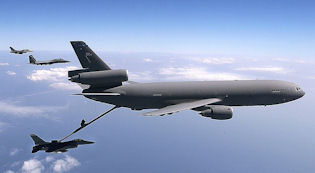 A KC-10 air tanker. [Source: Jerry Morrison / US Air Force]Two unarmed fighter jets intercept a suspicious target flying toward the United States from the east, which turns out to be some US military aircraft returning from Europe that are unaware of the terrorist attacks in America. (9/11 Commission 2004; Spencer 2008, pp. 246-247) The two F-15 fighters belong to the 102nd Fighter Wing of the Massachusetts Air National Guard, and are piloted by Dennis Doonan and Joe McGrady. They were the first fighters to take off from Otis Air National Guard Base, Massachusetts, after NORAD’s Northeast Air Defense Sector (NEADS) ordered the base to launch all of its available aircraft (see (10:30 a.m.) September 11, 2001). However, the two fighters had not yet been armed.
Fighters Directed toward Target - The weapons controller the two pilots are communicating with instructs them, “Fly 090 for 100 to intercept,” meaning they are to fly east for 100 miles. Knowing his plane is unarmed, McGrady is concerned that he might have to take out their target by crashing into it. To his relief, when he gets near it, he discovers the target is a convoy of five US military aircraft: a KC-10 tanker plane and four A-10 jets. Those onboard the planes, which are returning to the US from Europe, are unaware of the catastrophic events taking place in America.
Fighters Sent toward Boston - Doonan and McGrady radio the A-10 flight lead with diversion instructions. (102nd Fighter Wing 2001; Spencer 2008, pp. 245-247) The A-10s are directed to land at Barnes Air National Guard Base in Massachusetts. (Richard 2010, pp. 22) Doonan and McGrady are then instructed to fly to Boston to establish a combat air patrol over the city. Doonan decides that the KC-10 in the convoy can assist them with refueling once they are over Boston, and radios its pilot with instructions to accompany him. The pilot asks, “What’s going on?” Doonan gives no details, only replying, “It’s serious sh_t and you’re coming with us.” (Spencer 2008, pp. 247)
Aircraft Returning from Europe - The KC-10 has the call sign “Gold 99,” while the four A-10s have the call signs “Mazda 41,” “Mazda 42,” “Mazda 43,” and “Mazda 44.” (Federal Aviation Administration 9/11/2001; 9/11 Commission 2004; Richard 2010, pp. 21) The five aircraft had been on their way to Barksdale Air Force Base in Louisiana, according to author Lynn Spencer. (Spencer 2008, pp. 247) But the FAA’s New York Center told NEADS that their planned destination was Bangor International Airport in Maine. (North American Aerospace Defense Command 9/11/2001) According to Spencer, and also to a report written by the 102nd Fighter Wing’s historian, the aircraft have been flying to the US from the Azores, off Portugal. (102nd Fighter Wing 2001; Spencer 2008, pp. 247) But the New York Center indicated to NEADS that they came from Morón Air Base in southern Spain. (North American Aerospace Defense Command 9/11/2001; International Civil Aviation Organization 1/12/2006

) Such journeys from Europe to the US are “common flights between the continents,” according to 102nd Fighter Wing pilot Martin Richard. (Richard 2010, pp. 21)
Aircraft Not Answering Radio Communications - NEADS personnel were concerned because it had not been confirmed that the five aircraft were “friendly” and because the aircraft repeatedly failed to respond to NEADS’s radio communications (see (10:31 a.m.-10:47 a.m.) September 11, 2001). (North American Aerospace Defense Command 9/11/2001) According to Spencer, the aircraft were “out of radio range.” (Spencer 2008, pp. 247) However, NEADS personnel established that, as the aircraft had only been 174 miles away, they should have been hearing the radio communications. (North American Aerospace Defense Command 9/11/2001)