This page can be viewed at http://www.historycommons.org/entity.jsp?entity=dennis_hans_1

Dennis Hans was a participant or observer in the following events: 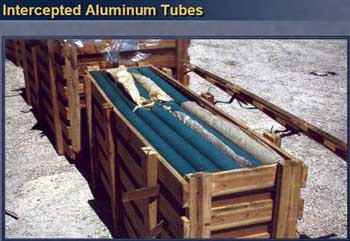 Photo of aluminum tubes intercepted by Western intelligence. [Source: CIA]The final, published report from British intelligence about Iraq’s WMD programs is released. Prepared by Joint Intelligence Committee (JIC) chairman John Scarlett and known as the “Scarlett dossier,” it contains much the same vagaries of language that the previous draft versions contained (see September 10-11, 2002 and September 16, 2002).
Contradictory Claims about African Uranium - Chapter 3 tells the reader “what we know” about Iraqi WMD, including the statement that “Uranium has been sought from Africa.” Unfortunately, the first and second drafts’ language clearly indicated that British intelligence does not “know” anything about the uranium deal, but merely believes the claim to be true. Author Dennis Hans writes in 2003, “Properly interpreted, the list is evidence not of Iraq’s capabilities, actions, and intentions, but of a JIC policy of saying ‘we know’ when the JIC doesn’t know, so as to lend undeserved credibility to the claims.” The language of the final draft contradicts the claim of established fact; later in Chapter 3, the “compelling evidence” of earlier drafts has been downgraded to merely stating, “But there is intelligence that Iraq has sought the supply of significant quantities of uranium from Africa.” And in the executive summary, Scarlett writes, “As a result of the intelligence we judge” that, among other things, Iraq has “sought significant quantities of uranium from Africa, despite having no active civil nuclear power programme that could require it.” The language is similar to that of the first draft, but a statement saying “we judge” is not the same as a statement saying “we know.” Hans concludes, “In any event, the published dossier, carefully reviewed by the best and brightest of the British intelligence and the Blair administration’s communications staff, presents three different interpretations: a ‘judgment’ in the executive summary, a statement of fact in Chapter 3, and a vague ‘there is intelligence’ claim in Chapter 3. Take your pick.” Prime Minister Tony Blair uses the dossier to flatly assert that “we now know the following”: that Iraq indeed tried to purchase uranium from Africa, “though we do not know whether he has been successful” (see September 24, 2002). (Hans 8/26/2003; Hutton Inquiry 1/28/2004) Later reporting will reveal that the main source for the dossier’s Africa-uranium allegation was in fact an Italian intelligence report (see Mid-October 2001) that was based on the same set of forged documents that formed the basis of the US allegations. (Bonini and d'Avanzo 10/24/2005; Bonini and d'Avanzo 10/25/2005)
'No Definitive Intelligence' on Aluminum Tube Allegations - In the section discussing Iraq’s alleged nuclear weapons program, the dossier says there “is no definitive intelligence evidence” that the shipment of aluminum tubes intercepted by the CIA was intended for use in an Iraqi nuclear program. This assessment of the tubes contradicts the majority view at the CIA. (United Kingdom 9/24/2002)
'Echo Chamber,' 'Disinformation Campaign' - Former CIA official Milt Bearden will later say, “When you are playing a disinformation campaign, you’re like a conductor who can single out one note in the symphony and say, ‘Let the Brits have that.’” Author Craig Unger will note that by the time the “Scarlett dossier” is released, between the various US and British claims and the array of reports in the media, it seems as if the claims of Iraq trying to buy Nigerien uranium are coming from multiple sources, “when in fact there [is] merely an echo chamger of corroboration.” (Unger 2007, pp. 259)
Claim that Iraq Can Launch WMD within 45 Minutes - Perhaps the most infamous portion of the dossier is the claim that Iraq can launch weapons of mass destruction against chosen targets within 45 minutes of the order being given. That particular claim was not in the drafts of the dossier, and was apparently inserted by Blair administration officials seeking to bolster the case for war with Iraq. The Blair government will later deny that assertion. (Associated Press 2/18/2008) After it is revealed early the following year that the US had relied on intelligence based on forged documents, the British will insist that they have additional evidence to support their claims (see March 7, 2003-July 7, 2003). (Smith 11/6/2005)